Bulldogs show some bite in 73-61 win over No. 8 Villanova 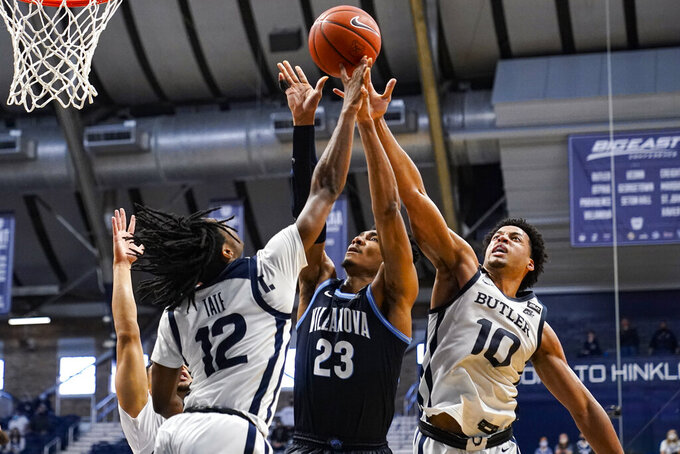 Villanova forward Jermaine Samuels (23) gos up for a rebound with Butler guard Myles Tate (12) and forward Bryce Nze (10) in the first half of an NCAA college basketball game in Indianapolis, Sunday, Feb. 28, 2021. (AP Photo/Michael Conroy) 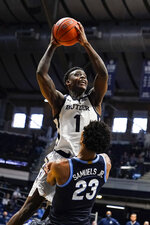 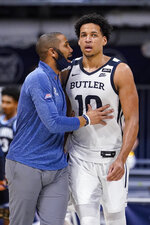 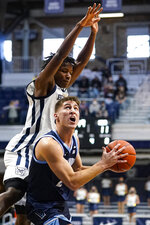 Together, the Bulldogs' backcourt was unbeatable.

Harris scored 15 of his 20 points in the first half on Sunday and Bolden finished with 12 of his 15 in the second half to help Butler pull away for a 73-61 win over No. 8 Villanova.

Harris and Bolden combined for four of Butler's 10 3-pointers, including two in the waning moments to seal the victory.

Butler (9-13, 8-11) swung the game with a suffocating defense that limited the Wildcats to one basket during the final seven minutes of the first half and an offensive charge fueled by Harris. That combination resulted in a 16-3 run that gave the Bulldogs a 31-20 lead. They never trailed again, winning their second straight while beating Villanova for the fourth time in the last five meetings at Hinkle Fieldhouse.

“I felt like our guys deserved it," Butler coach LaVall Jordan said. “From start to finish, they executed the game plan, played through mistakes and played all the way through.”

Jeremiah Robinson-Earl and Collin Gillespie tried to rally Villanova in the second half. The Wildcats cut a 42-28 deficit in half with a 7-0 flurry and scored again after Butler called timeout to make it a five-point game with 14:14 to go.

But Bolden's 3 stopped the run, Bryce Golden made three straight baskets for the Bulldogs and Bo Hodges made another 3 to give Butler a 54-39 lead with 10:40 left. And just when the Wildcats thought they had a chance after getting within 57-50 with 6:13 left, Harris and Bolden answered again.

Robinson-Earl finished with 16 points and 16 rebounds. Gillespie had 14 points.

Villanova: The loss won't end the Wildcats' streak of 30 consecutive weeks in the AP Top 25. It could, however, impact their conference title hopes and perhaps their chances of earning a No. 2 seed in the NCAA Tournament. Clearly, Villanova wasn't itself during the first half — shooting 28% from the field and grabbing just one offensive rebound.

Butler: This has been largely a lost season for the Bulldogs. They struggled to find consistency between a rash of injuries and six postponed games. But the Bulldogs produced two solid performances this week by beating Seton Hall and now Villanova. If they keep it up, they could make a run in the Big East tournament.

Butler: Harris made five of his first eight shots and finished 7 of 14. ... Bryce Nze posted his fifth double-double this season with 12 points and 11 rebounds. He also had five assists. ... Golden had 13 points and six rebounds. ... Butler has scored 70 points four times this season. ... The Bulldogs’ last four opponents are 15 of 81 on 3s.

The Bulldogs have been playing short-handed for much of the season and Sunday was no exception. Starting guard Aaron Thompson missed the game with shoulder and thumb injures and forward Christian David sat out with a knee injury. Thompson and David were two of the seniors honored with highlight packages that played on the scoreboard during timeouts in what could be their final home game.

Villanova: Hosts No. 13 Creighton on Wednesday, a game that could determine the league's regular-season champ.

Butler: Takes another extended break before closing the regular season Saturday at Creighton.