Column: To pay or not pay college athletes is not the issue 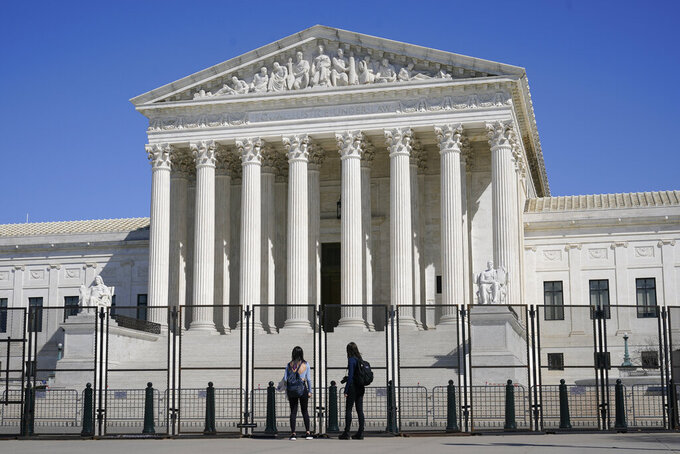 FILE - In this March 21, 2021, file photo people view the Supreme Court building from behind security fencing on Capitol Hill in Washington after portions of an outer perimeter of fencing were removed overnight to allow public access. A Supreme Court case being argued this week amid March Madness could erode the difference between elite college athletes and professional sports stars. (AP Photo/Patrick Semansky, File)

We should've moved on from the issue of whether to pay or not to pay at least some college athletes.

Given the billions that are generated by massive television deals and 90,000-seat stadiums — not to mention those pesky antitrust laws — it should be accepted by all sides that some sort of compensation is not only fair, but inevitable.

At this point, the discussion needs to be moving on to more complex questions, such as: Who gets paid? How much should they receive? What can be done to ensure gender equality? Will non-revenue sports survive?

An Associated Pres survey of athletic directors around the country revealed the tired ol' gripes we've been hearing for years about any efforts to put more money in the pockets of those who are powering the revenue rocket ship.

Namely, that it will destroy every college sport other than football and men's basketball.

“What little revenue 95% of institutions realize through revenue sports, goes toward supporting other sports,” one AD wrote in the survey, which allowed the responders to remain anonymous. “Paying those 5% of students will devastate the other teams that rely on that revenue to survive.”

But that long-standing contention isn’t likely to hold up for much longer, especially when listening to a U.S. Supreme Court that seemed very sympathetic to athletes who say they are being illegally shortchanged by rules limiting their education-related compensation.

“Antitrust laws should not be a cover for exploitation of the student-athletes," Justice Brett Kavanaugh said during a hearing this week that should've sent chills down the backs of everyone at the NCAA and its member schools.

Under current NCAA rules, students cannot be paid, and the scholarship money colleges can offer is capped at the cost of attending the school. The NCAA defends its rules as necessary to preserve the amateur nature of college sports.

A group of former athletes are challenging that argument as a violation of federal antitrust laws. It would appear they have a very good case, given the fact that major athletic departments have essentially transformed themselves into pro sports franchises except for that pesky requirement of actually paying for labor.

Justice Elena Kagan suggested the NCAA members have essentially joined together to cut themselves a very good deal on the cost of their work force.

Kavanaugh was even more blunt, telling a lawyer for the NCAA that it appeared "schools are conspiring with competitors ... to pay no salaries for the workers who are making the schools billions of dollars.”

Yep, that's about the size of it.

With the highest court in the land strongly indicating that it won't let this system go on for much longer, it's time to get down to the nitty-gritty details of how some sort of pay-for-play system might work.

Make no mistake, this will be an extremely complicated process that can only be resolved by all sides coming to the bargaining table as equal partners, with a realization that no one is going to get everything they want.

It most likely means the NCAA making the very big concession of recognizing some sort of union organization to represent the athletes' interests.

In the end, the free-market system will likely govern the way college athletes are compensated, which means the best players in the most profitable sports will largely be the ones who are being paid.

This may be a blow to those on the rowing team, but it is downright unfeasible to expect every university to dole out equal checks to every athlete, no matter their sport. For that matter, not every school has the financial wherewithal to compensate everyone the same way. And while we're at it, forget about the concept of everyone on the same team getting identical checks.

That's not the way it works in professional sports — sorry, Mr. Left Guard, you're never going to make as much as quarterback Pat Mahomes — nor most other American businesses.

You might've noticed that Scarlett Johansson has fair more financial leverage than a little-known character actress when negotiating a salary to appear in a new film.

College athletics will likely have to set up some sort of similar model, though perhaps with the caveat that any money earned is put into a trust fund that is not ;paid out until an athletes graduates or leaves for the pros.

There is surely enough money to make this happen without shutting down every other program on campus, though inevitably some tough decisions will have to be made to, at the very least, ensure compliance with Title IX requirements.

In the AP survey, a striking 94% of the ADs responding said it would be somewhat or much more difficult to comply with gender equity rules if their school were to compensate athletes in the biggest money-making sports.

Of course, where was this concern for women's sports in the days leading up the March Madness basketball tournaments? The inequities between the men's and women's games were on full display in everything from the size of the weight rooms to the goodie bags that every player received.

One athletic director in the survey summed it up best.

“The projected success and future of intercollegiate sports hangs in the balance with the decisions that will be made in coming months at the federal and national level,” the AD wrote. “The current model is broken, will not survive long term and should be reformed so it can benefit institutions and student-athletes in the future.”

Yes, there are major issues that must be addressed.

But the current system won’t last much longer.

Time to get to work.