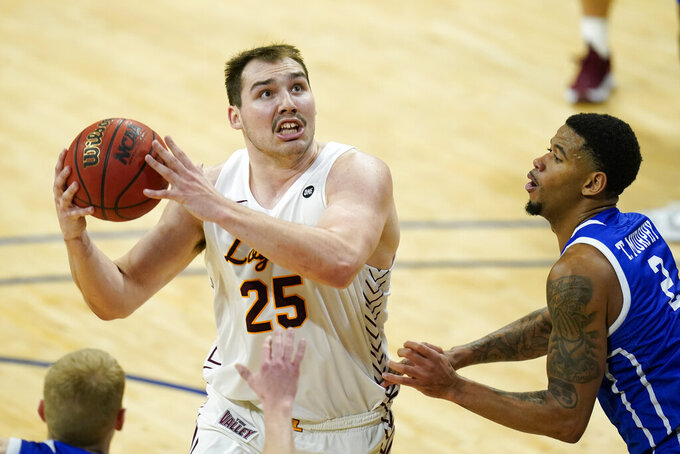 DES MOINES, Iowa (AP) — Tremell Murphy scored 17 points, including the go-ahead basket in overtime, and Drake rallied past No. 22 Loyola Chicago 51-50 on Sunday.

Murphy’s layup with 2:50 remaining put the Bulldogs ahead for good, 49-48, as the Missouri Valley Conference powers split a back-to-back set of games in Des Moines. Loyola had two shots blocked in the final 15 seconds before Murphy made the clinching steal and was fouled.

“Great win for us today,” Drake coach Darian DeVries said. “Two teams giving all they had to get a victory.”

“The sting right now is tough,” Loyola coach Porter Moser said, “because we had opportunities.”

Loyola held a 42-32 lead with 8 minutes remaining, but Drake gradually clawed back into contention.

Roman Penn’s layup with 1:23 left in regulation drew the Bulldogs even, and Loyola Chicago only had one more shot attempt in regulation as the game went OT tied at 45.

After Murphy’s basket in OT, Darnell Brodie scored to give Drake a 51-48 lead with 2:04 left, and the Bulldogs hung on despite failing to score again.

The rivalry game ended with coaches shouting at each other and assistants had to be separated.

Loyola tried to pull away with an 11-0 run in the first half. Krutwig scored on consecutive baskets and Marquise Kennedy added a layup to make it 23-14.

Drake closed the gap to 25-22 before halftime on a jumper by D.J. Wilkins. The Bulldogs stayed close despite missing 11 of their first 14 shots and all nine of their first-half attempts from 3-point range.

Drake missed 10 straight from beyond the arc before Wilkins hit a 3-pointer that pulled the Bulldogs within 26-25 early in the second half.

The win improved the Bulldogs' NCAA Tournament resume while keeping them in contention for the Valley title.

“I think we had to win to stay in those types of conversations,” DeVries said. “Our guys knew that.”

Loyola will likely drop out of the AP Top 25 after making its first appearance in the rankings last week, something the Ramblers never achieved during their Final Four season of 2017-18. Drake reached No. 25 in the Feb. 1 poll.

Loyola plays its next three games at home, starting with Valparaiso on Wednesday.

Drake travels to Northern Iowa for a game Wednesday, then returns home to face Evansville on Sunday.