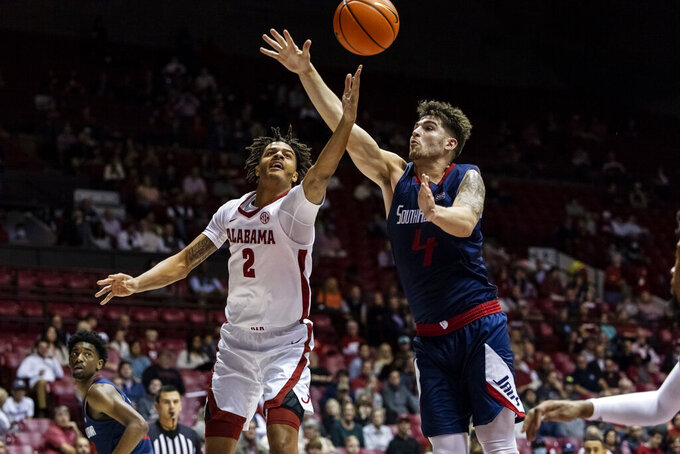 TUSCALOOSA, Ala. (AP) — Keon Ellis scored 18 points, Jahvon Quinerly made a go-ahead layup with under three minutes to go and No. 14 Alabama got past South Alabama 73-68 Tuesday night.

The Crimson Tide (3-0) trailed 34-31 at the break, largely due to uncharacteristically sloppy play, committing 14 turnovers in the first half after having a total of 14 in its season opener and eight in its second game.

“We try to be active and pressure people and make them uncomfortable,” South Alabama coach Richie Riley said. “I thought we were able to do that, which is a statement to how we’re improving defensively, because in my opinion they have one of the strongest backcourts in the country."

“To be able to turn them over that many times, 22 for the game, is growth within our defense,” he said.

Jaden Shackelford added 18 points and had four of the seven 3-pointers that Alabama made.

“It’s definitely a good sign, when we face adversity, to not give up and fight back,” Shackelford said. “Us not giving up, us fighting, we see what we got as a team.”

Darius Miles added 10 points off the bench and Quinerly had eight. Charles Bediako was key to the defensive effort with five blocks and three steals.

Manning also had six rebounds and four assists. Senior Kayo Gonzales added 12 points, all of them coming from behind the 3-point line.

A layup by Ellis tied it just under 12 minutes left. His corner 3-pointer started an 8-0 run that got Alabama rolling.

Alabama got its first taste of a close game and responded by making seven of 10 free throws in the final two minutes. South Alabama’s ability to force the Crimson Tide into a high-stress situation bodes well its future, as this was by far its toughest nonconference game of the season.

Alabama freshman Jusaun Holt went from playing a total of four minutes in Alabama’s first two games to eight minutes against South Alabama. He didn't take a shot, but did grab three rebounds and block a shot.

“I told him, ‘Where are we struggling at? The defensive end. If you can guard and play hard, we’ll put you in,’” Alabama coach Nate Oats said. “He guarded and played hard in practice. Our guys weren’t crashing, weren’t getting rebounds, that’s something he’s done well in practice. I thought he played pretty well, played pretty hard.”

South Alabama hosts a NAIA opponent, the University of Mobile, on Saturday.

Alabama completes a four-game homestand to start the regular season on Friday night against Oakland. The Golden Grizzlies already have a Power 5 upset this season, beating Oklahoma State 56-55 on Friday.