Final Four promises to be good after bracket of upsets 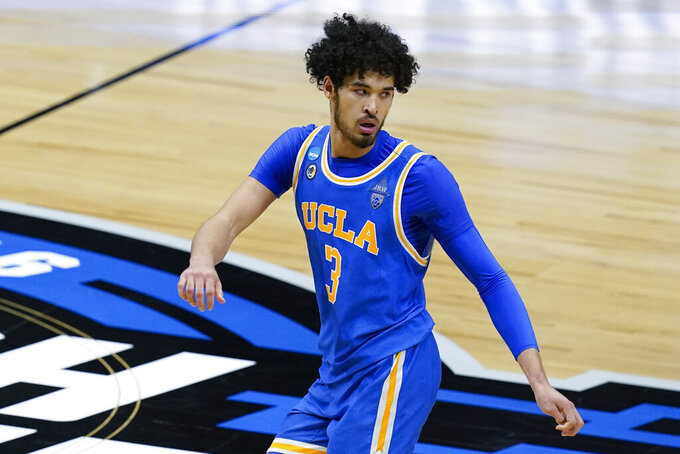 UCLA guard Johnny Juzang runs up court after making a basket during the second half of an Elite 8 game against Michigan in the NCAA men's college basketball tournament at Lucas Oil Stadium, Tuesday, March 30, 2021, in Indianapolis. (AP Photo/Darron Cummings)

INDIANAPOLIS (AP) — March Madness was worth the year-long wait.

The disappointment of losing last year's NCAA Tournament to the pandemic added excitement for this year's bracket and it didn't disappoint with a slew of upsets.

Now that the dust has settled a bit, we're down to four.

One is chasing history. Another wasn't supposed to get this far. Two, both from Texas, have rekindled memories of the old Southwest Conference.

This should be fun.

Gonzaga. The Zags haven't lost since February 2020 and have history within their grasp. Win two games and they'll not only hoist the championship trophy for the first time, they'll become the first team to complete an undefeated season since Indiana in 1976. Oh, they're also good on offense. Twenty-seven straight double-digit wins good.

Baylor. The Bears were discounted as title contenders when a late-season COVID-19 pause seemed to slow their roll. No one's saying that now after they swarmed their way through the bracket. If you like in-your-jersey defense with a dash of up-tempo offense, this is your team.

Houston. Like Baylor, the Cougars were in the now-defunct Southwest Conference. They're playing a bit like they did back then, conjuring up memories of the Phi Slama Jama days. They like to play defense, too, so there's going to be a few bruises when they meet the Bears in the Final Four.

UCLA. What a job Mick Cronin has done with the Bruins. He brought some of that toughness his Cincinnati teams had with him to Westwood and has UCLA back in a once-familiar place. The Bruins like to squeeze the pace and their opponents, so Gonzaga's next step on the road to perfection won't be an easy one.

Corey Kispert, Gonzaga. The All-American sharpshooter has won more games (126) than any player in decades and is the Zags' go-to offensive guy. He's the second player in the last 10 years to shoot 50% from the floor, 40% from 3 and 90% from the free throw line.

Jared Butler, Baylor. The first player in school history to be named an Associated Press All-American is the leader on a team full of standouts. He can score, dish, loves to hit clutch baskets.

Johnny Juzang, UCLA. The athletic guard's decision to leave Kentucky gave the Bruins a huge boost. He can score in bunches, as he showed in the Elite Eight against Michigan, and is playing his best basketball at just the right time.

Quentin Grimes, Houston. Another transfer who has had a massive impact on his new team. The former Kansas guard is the Cougars' leading scorer and a big reason they're back in the Final Four for the first time since the Phi Slama Jama days.

Davion Mitchell, Baylor. He's got the size of a linebacker, but the quickness of a cat. Put Mitchell on the opposing team's scorer and you can almost guarantee they're going to have a bad night.

Jalen Suggs, Gonzaga. The highest-rated prospect in program history does not play like a freshman. He lives for the big moments and has thrived under the postseason spotlight. Keep an eye on his passing. The former top-level quarterback prospect drops 3-4 dimes a game that will make your jaw drop.

Tyger Campbell, UCLA. The sophomore point guard may have the best hair in the bracket and the game to match it. He's a steady force for the Bruins and fearless driving into the paint, even at 5-foot-11, 180 pounds.

DeJon Jarreau, Houston. The senior is the Cougars' floor leader, assists leader and can fill it up when he's hot. He scored 20 points against Oregon State in the Elite Eight, so he's clearly not afraid of the spotlight.

Mark Few, Gonzaga. Fewy has turned a small Jesuit school in eastern Washington into a national powerhouse. Gonzaga has reached the NCAA Tournament every year there's been one in his 21 seasons, three Elite Eights and is in the Final Four for the second time since 2017.

Scott Drew, Baylor. He resuscitated a program reeling from one of the darkest scandals in college sports history during 18 seasons in Waco. The Bears reached the Elite Eight three times under Drew and broke through this year, earning the school's first Final Four bid in 71 years.

Kelvin Sampson, Houston. He's returned to Indiana, where his career nearly came to an end. Sampson was forced out at Indiana in 2008 due to NCAA sanctions and has reinvented himself during seven seasons at Houston, taking the Cougars to the Final Four for the first time since 1984.

Mick Cronin, UCLA. He took a bit of a risk taking over a UCLA program that had fallen off when he arrived in Westwood two years ago, but has made it work quite well. The Bruins have embraced Cronin's play-hard style and are back in the Final Four for the first time since 2008