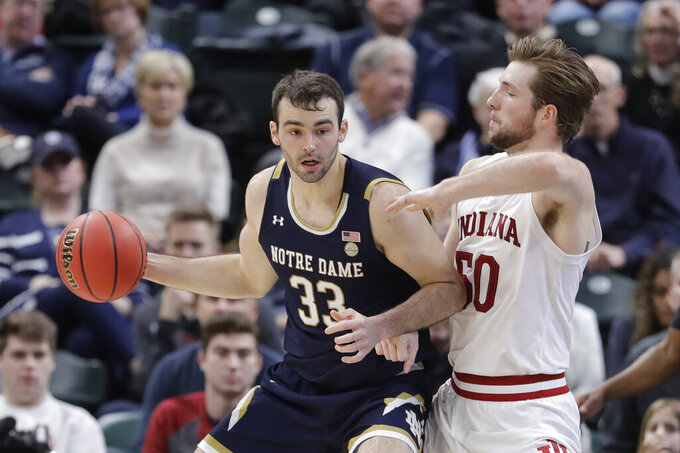 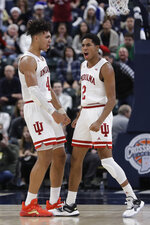 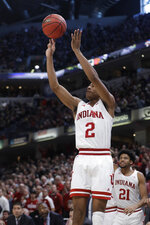 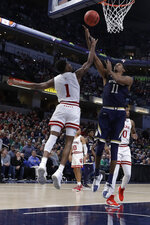 On Saturday, he did — and he made it count.

Franklin knocked down a go-ahead 3-pointer with 15.7 seconds left, helping the Hoosiers stave off Notre Dame's frenetic second-half rally for a 62-60 win in the Crossroads Classic.

“He needed to stop walking around with his head down and acting like nobody knew who he was," coach Archie Miller said. “When he shoots it, everybody on the team knows he can make it. For him to stick some shots for us, finally, is a big deal."

Franklin scored a season-high 17 points, going 4 of 5 from beyond the arc and becoming the second straight freshman guard to make the decisive shot in the annual event that brings Indiana's four best-known basketball schools to Indianapolis.

Rob Phinisee made a 3 to beat Butler in overtime last year.

But John Mooney, who scored 15 points, missed a short jumper in the paint and Rex Pflueger's half-court heave at the buzzer hit nothing but air.

The errant shots sealed Notre Dame's fate after they charged back from a 17-point deficit to take a 59-54 lead with 3:42 to go.

And the Hoosiers needed everything Franklin could muster to pave the way for their own comeback.

Defensively, he helped hold the Fighting Irish without a basket for the final 4:20 and offensively, he was brilliantly decisive down the stretch.

Franklin's third 3, with 2:59 left, trimmed Notre Dame's lead to 59-57. A few possessions later, he spotted Trayce Jackson-Davis for the dunk that tied the score with 1:00 to go.

Then, after Prentiss Hubb made 1 of 2 free throws to give the Irish a 60-59 lead, Aljami Durham flipped the ball to a wide open Franklin in the corner for the biggest shot of his first college season.

“We have a good attitude right now with good leadership," Miller said. “We've been able to hang tough. When we get into conference play, it's going to be tougher.

Notre Dame: The Irish certainly showed some fight on a day they weren't themselves. After making 35 3s in their previous two games, Notre Dame shot 37.5% from the field and went 6 of 27 from beyond the arc. And yet they still found a way to dig themselves out a huge hole. But this loss will sting.

Indiana: The victory certainly helps the Hoosiers' postseason resume. They now have neutral court wins over Connecticut and Notre Dame along with home wins over Florida State and perennial tourney caliber South Dakota State. Plus, they still could add another big nonconference win, against Arkansas, before returning to league play. Aside from the blowout loss at Wisconsin, the first half of the season couldn't have gone any better for Indiana.

Notre Dame: Has lost four of its last five in the Classic and four straight to the Hoosiers in this event. ... After forcing six Hoosiers turnovers in the first 11 minutes, Notre Dame added only six the rest of the game. ... Nate Laszewski had 10 points and 10 rebounds. ... Mooney, the nation's leading rebounder, grabbed 10 on Saturday. ... Juwan Durham scored 11 points.

Indiana: Jackson-Davis had 14 points and seven rebounds. ... Devonte Green had 11 points. ... The Hoosiers outscored Notre Dame 34-24 in the paint.

Joey Brunk joined Austin Etherington as the only players to appear in two different uniforms in this event.

Etherington transferred from Indiana to Butler while Brunk started with the Bulldogs before heading to Bloomington after last season.

And just 20 minutes away from his home on Indy's south side, he delivered a dynamic performance. He finished with nine points, a career-high 14 rebounds and three assists.

“Joey was terrific on the glass all game," Miller said. “Joey was big in his role in the game."

Indiana takes an eight-day break before hosting Arkansas on Dec. 29.