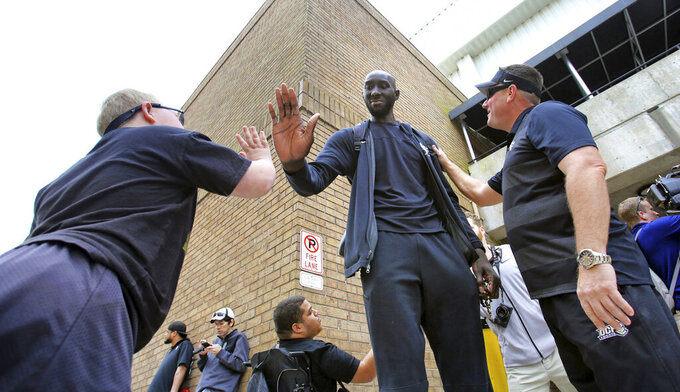 In this Wednesday, March 20, 2019 photo, Colt Kohler, 11, gets a high-five from Central Florida center Tacko Fall, as dad Erik Kohler looks on as UCF departs for the NCAA college basketball tournament in Orlando, Fla. Fall, at 7-foot-6 the tallest player in the game, at last gets to appear on the game's biggest stage when UCF opens the NCAA Tournament on the college basketball's biggest stage. (Joe Burbank/Orlando Sentinel via AP)

COLUMBIA, S.C. (AP) — The tallest man in college basketball is finally on the game's grandest stage — 7-foot-6 Tacko Fall is set for the NCAA Tournament.

"For me, for us, I would say it means everything," said Fall, who's been the tallest player in college since joining UCF in 2016. The native of Senegal entered prep basketball as a project and slowly worked his way into a key performer to help the Knights make the NCAAs for the first time since 2005.

"We just put our heads down and say we have to make it and we made it happen," Fall said with a grin.

Fall is impossible to miss on the court, standing a half a foot or more above opponents. Year by year, Fall has increased his skill level from a raw freshman to a much more polished senior.

He averaged seven points a game his first season, despite an astonishing .750 shooting percentage which was then a UCF record.

Fall had 94 blocked shots his sophomore year (another single-season high) and was selected as the American Athletic Conference defensive player of the year.

As a junior, Fall topped his freshman season by making 79 of 103 field goals for a .767 percentage. This season, Fall has improved his positioning underneath and his basketball knowledge in understanding the game, UCF coach Johnny Dawkins said.

"He's really improved his skillset," Dawkins said. "He scores around the basket, doesn't need to dunk everything to score" as in the past.

And then there's the Fall away from the court, a thoughtful, humble person who wants to be engaged in the community.

Fall, a Muslim, was asked Thursday his feelings about the killing of 50 people at two mosques in Christchurch, New Zealand, a week ago. Fall didn't hesitate with his reply, saying in Senegal there are Christians and Muslims who work alongside each other and live in peace.

"I love the game of basketball, but it's always bigger than that," Fall said. "Being able to represent what we are about means a great deal to me. I was very sad when I saw what happened down in New Zealand. I thought about it a lot. But we've just got to learn how to get along. I mean, everybody, we all pretty much are people, regardless of the religion."

Fall is eager to concentrate on basketball this week. If he's playing well, he can give VCU a difficult challenge to overcome.

Rams coach Mike Rhoades said his players did "awareness drills" he uses when the Rams face an opponent with a different style or player with great size or quickness.

"A guy like Tacko Fall around the rim that you're not just going to go in and shoot a finger roll," Rhoades said. "That's not going to happen."

Dawkins, Fall's coach, said he's been remarkable to coach, receptive to teaching and working hard to get better.

Fall is more of a throwback center without the shooting ability from the perimeter. While many NBA mock drafts don't have Fall getting picked, Dawkins believes his skill and personality make him an asset to any team he's on.

"I hear the game has changed and his style of play no longer exists, but when you have a player like Tacko Fall with his personality, with who he is, in any community, he'll be one of the best people you'll ever have," he said.