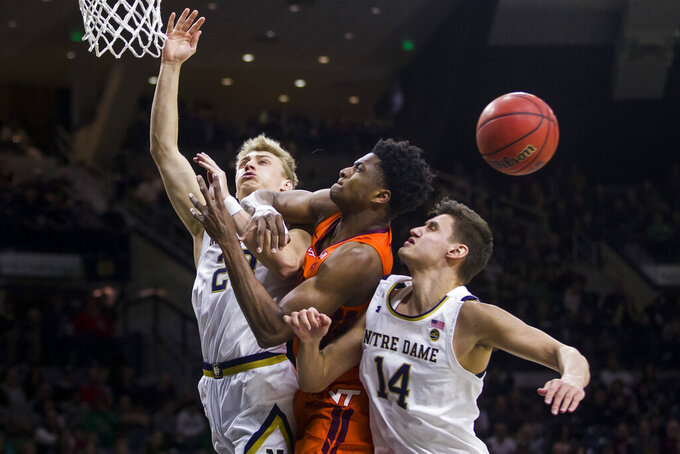 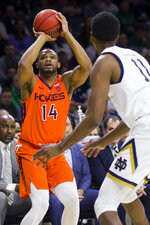 SOUTH BEND, Ind. (AP) — Mike Brey’s Notre Dame basketball team knows the Tobacco Road ahead for an NCAA tournament bid could be a long shot for his team.

But T.J. Gibbs believes the Irish are on a mission following their 64-56 victory Saturday over Virginia Tech in the regular-season finale for both teams.

“It was emotional at the beginning, but we’re on a mission and we’ve got a lot of work to do,” the 6-foot-3 Gibbs said after scoring 22 points in what could be his final home game.

“It’s been an awesome experience, but we’re not done yet,” Mooney said. “We had a job to do tonight and we took care of business. T.J. was on fire – when he’s hunting his shot that’s when we’re at our best.”

Brey was happy with his team’s performance after losing its last two games at Wake Forest and versus No. 7 Florida State.

“We’re 8-4 since Jan. 24 and two of the four losses have been heart breakers,” said Brey. “We’re playing pretty good, so we’ll go to Greensboro (North Carolina) and let it rip.”

Meeting the Fighting Irish for the first time this season, P.J. Horne scored 14 points and Hunter Cattoor 12 to lead the Hokies (16-15, 7-13) who could end up playing the Irish Wednesday night in the Greensboro Coliseum.

“We can save the scouting report,” Brey joked.

Notre Dame took a 28-17 halftime lead behind 15 points from Gibbs. The senior hit 4 of 5 3-pointers and added three free throws after being fouled on another 3-point attempt.

“I think Mike’s bunch did some things in the first half that had us on our heels a little bit,” Virginia Tech first-year coach Mike Young said. “In the first 10 minutes we missed some shots that were head-scratchers.”

Virginia Tech had scoring droughts of nearly-nine minutes and three-plus minutes as the Irish pulled away with Gibbs and Prentiss Hubb hitting 3-pointers to give the Irish their largest lead of the half at 28-15 before Horne beat the first-half horn with a jumper.

Nahiem Alleyne made two free throws and then a layup to trim Virginia Tech's deficit to 33-28 with 16:36 to play but the Hokies got no closer. Hubb set up Juwan Durham and Nate Laszewski for dunks in a 27-second span and Goodwin added a short jumper to make it 47-32 midway through the second half.

“It puts a lot of pressure on your defense,” Young said. “I thought we fought like heck in the first half to limit Notre Dame to 33% (9 of 27) from the field and they had nine turnovers. And they never turn the ball over.”

Notre Dame: Mooney was held scoreless in the first half, extending a scoreless string of 42 minutes going back to the first half of Wednesday’s 73-71 loss to No. 7 Florida State. He finally broke the string at 52:32 when Hubb set him up for a 3-pointer for a 50-35 Irish lead.

“There’s other things you can do to help your team besides scoring the ball,” Mooney said.

Gibbs saluted his teammate. “A lot of teams are doubling him,” he said. “John’s been doing a great job with the outlet pass and the skip pass. That’s the way we play.”

Virginia Tech: Game Tuesday or Wednesday in ACC tournament at Greensboro, North Carolina, against team to be determined.