Gophers use strong 2nd half to pull away from Northwestern 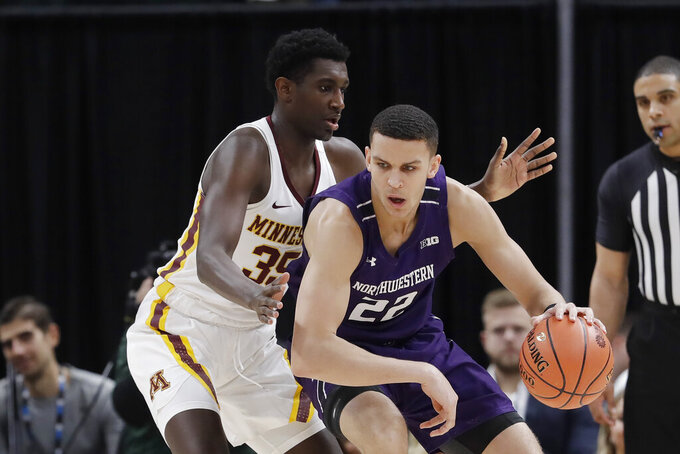 Northwestern's Pete Nance (22) works the ball against Minnesota's Isaiah Ihnen (35) during the first half of an NCAA college basketball game at the Big Ten Conference tournament, Wednesday, March 11, 2020, in Indianapolis. (AP Photo/Darron Cummings) 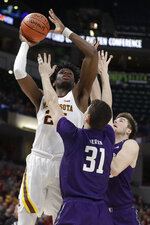 And if it was their final act in front of a big crowd this season, they gave the fans a performance to remember.

Oturu scored 24 points, Carr added 14 and the Golden Gophers used a dominant second half to pull away from Northwestern 74-57 in the first game of the Big Ten Tournament.

“It was the mentality we came with out of halftime," Carr said. “We were not playing how we wanted, taking good looks and shooting with confidence."

Fans weren't happy either after enduring an ugly first half and then learning just before halftime league officials had reversed course on who would be allowed into Bankers Life Fieldhouse this week.

Initially, the Big Ten decided to stick to the script. But hours after the NCAA announced it would prohibit most fans from watching it's tournament games because of public health concerns, conference officials revised their stance, too.

An official announcement came on the public address system just as the teams started warming up for the second half and drew a crescendo of boos. Even after learning the Big Ten would refund ticket-holders for all five days of the tourney, some fans still panned the move.

“We were going to be here for the whole tournament," said Tim White, a 44-year-old fan who flew from Baltimore to Indianapolis and won't even get to see his beloved Terrapins suit up. “Now it’s trying to find a flight home, go back to hotel and cancel, see if they let us cancel the rest of it.”

But rather than allow all that become a distraction, the Gophers (15-16) focused on the task at hand.

Oturu and Carr helped the 12th-seeded Golden Gophers open the second half on a 7-2 run and break away from a 36-36 tie with a 25-7 spurt. Eventually, they extended the lead to as much as 22 and charged to their second straight win.

“I don't know what it is but against us, Oturu becomes like Klay Thompson," Wildcats coach Chris Collins said. “He was 3 of 5 on 3s the last time and 2 of 2 tonight.”

The 13th-seeded Wildcats (8-23) were led by Pete Nance with 15 points but never recovered after falling into a double-digit deficit. Northwestern closed out the season with 14 losses in 16 games.

Minnesota, meanwhile, must now prepare to take the stage Thursday in front of dozens rather than thousands.

“Certainly, with no fans, it will be a different atmosphere, kind of like a closed scrimmage but obviously more on the line," Payton Willis said after scoring 12 points. “ We'll be coming out and competing just like there's fans out there and trying to get the ‘W' tomorrow.“

Northwestern: The young Wildcats struggled all season, and this was a tough way to close out the season. Collins remains convinced that the future is bright but had hoped for a stronger finish after the Wildcats won two of their previous three games. They'll now have an entire offseason to find solutions.

Minnesota: The Golden Gophers moved within one win of reaching of .500 —- and potentially becoming eligible for the NIT. It's still going to be a tall order. They wound need to beat No. 25 Iowa in Thursday's second-round game then take down No. 21 Illinois in Friday's quarterfinals to have a chance.

Minnesota: Oturu also had eight rebounds and was 10 of 12 from the free-throw line. ... Carr had five rebounds and five assists. ... Willis also had six rebounds. ... The Golden Gophers wound up 12 of 24 on 3s.

Northwestern: “I thought in the first half, it was going by the book for us," Collins said. “Oturu was going, but the other three (key players) weren't really getting the shots, getting the points, and that's why they only had 29. Then in the second half, those guards really picked it up, and that's when it got going downhill for us."

Minnesota: “A terrific second half offensively as well as defensively holding them to 26 points," coach Richard Pitino said. “Excited to continue to move on in this tournament."

Northwestern: Will hope for a brighter future from this young group of players.