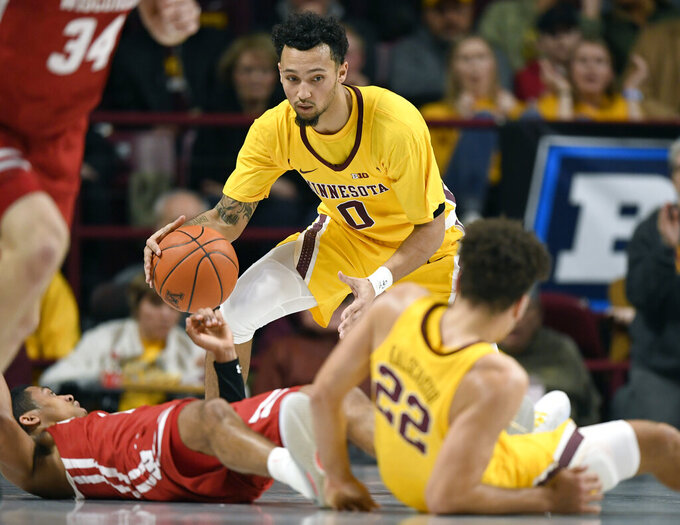 Minnesota's Payton Willis (0) gets the ball after Wisconsin's D'Mitrik Trice and Minnesota's Gabe Kalscheur (22) fell to the court during the first half of an NCAA college basketball game Wednesday, Feb. 5, 2020, in Minneapolis. (AP Photo/Hannah Foslien)

MINNEAPOLIS (AP) — The perimeter production Minnesota has been counting on from Payton Willis was not coming when the Gophers and their junior guard got just the break they needed.

Willis missed three games earlier in the season because of a sprained ankle, and even after three full weeks on the sideline he was still struggling upon his return to find his rhythm. Then he hurt his non-shooting shoulder and had to miss another contest on Jan. 30 in a loss at Illinois.

He responded in his first game back with a career-high 21 points in a commanding win over Wisconsin.

“It’s never good being hurt, but it kind of was a blessing in disguise,” Willis said. “I got a few days of rest, and my ankle got to fully heal. It’s always motivation every time you get hurt, because sometimes you take the game for granted.”

With seven newcomers on the roster this season, the third-most in the Big Ten, the Gophers were going to be a team in transition. With two transfers from major conference programs who had to sit out last season among those debuting in maroon and gold, the Gophers figured to be able to lean as hard on Marcus Carr and Willis as anyone on the court.

Carr, though prone to inconsistency so far as a scorer, has been an instant success as a leader, passer and ironman. The sophomore who started at Pittsburgh has averaged more than 38 minutes per game in conference play.

Willis, however, has been slower to thrive, with his health thus far an obvious hindrance.

The 6-foot-5 native of Fayetteville, Arkansas, who played his first two years at Vanderbilt, shot just 27.1% from 3-point range in his first nine Big Ten games. Then he went 5 for 7 from behind the arc against the Badgers on Wednesday, giving the Gophers, their fans and their opponents a glimpse of how productive the offense can be when the outside shots are dropping to give star Daniel Oturu more space to work in the paint.

“Even though I’ve been in a slump the past few games, the guys still instill confidence in me to shoot the ball when I’m open,” Willis said.

If Willis and fellow wing man Gabe Kalscheur can both stay hot in the same game more often than not down the stretch, the Gophers (12-10, 6-6) will be in good shape for their push for an NCAA Tournament bid. Kalscheur was 3 for 8 from 3-point range against Wisconsin.

“It's just been kind of a series of bad luck,” coach Richard Pitino said. “When Payton shoots, when Gabe shoots, I’m surprised when they miss. They work that hard on it. They’re that good at shooting."

One of Minnesota's best wins of the season came on Jan. 15 at home against Penn State. The rematch on the road on Saturday with the Nittany Lions, who are currently ranked 22nd in the Associated Press poll, represents an opportunity for an even stronger victory for the tournament selection committee to consider next month. The Gophers are 1-7 in true road games this season.

“It’s hard to be able to win on the road, but it’s not impossible,” Pitino said, “so our guys have got to be able to embrace that challenge.”