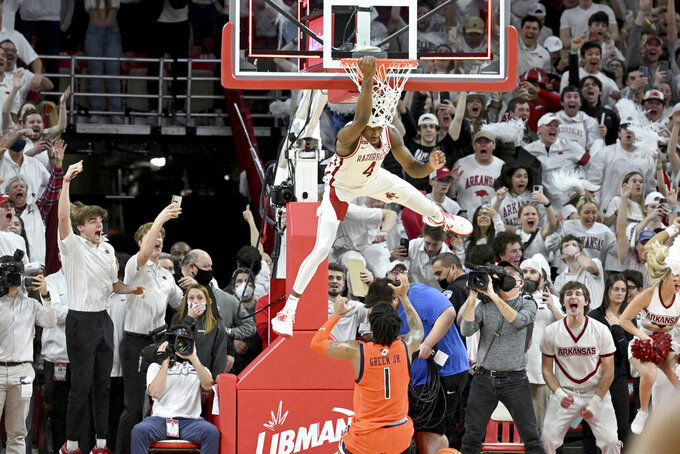 FAYETTEVILLE, Ark. (AP) — Auburn came onto the Bud Walton Arena court acting like a No. 1 team, dancing on the Arkansas logo before the game.

When it was over, the Razorbacks and all their fans were the ones doing a victory stomp — led by a shirtless coach going hog wild.

"We didn’t like them dancing on our logo,” said Jaylin Williams, whose late basket forced the extra session. “That was disrespectful to us. That added fuel to the fire.”

Arkansas students stormed the court after the final buzzer sounded, turning the floor into a sea of white. Several Razorbacks players stood on a table on the sideline twirling towels.

Arkansas coach Eric Musselman ripped off his shirt — as he's occasionally done in the past — and joined the celebration. No matter that his arm is still in a sling after rotator cuff surgery last month, he wasn't going to miss this pulsating party.

“There won’t be a better crowd than that in the next 50 years,” Musselman said. “Nobody that was here did not have fun unless maybe an Auburn fan.”

It was the first time an Arkansas team had beaten a No. 1-ranked team since 1984 against North Carolina.

Jabari Smith scored 20 points and Wendell Green Jr. had 19 for the Tigers. Walker Kessler finished with 16 points and 19 rebounds.

“I was proud of being No. 1. Gosh, we haven’t lost since some time in November,” Auburn coach Bruce Pearl said.

“We understand we have a price on our head. It’s very difficult on the road. We worked really hard to put ourselves in this position. It was tough,” he said.

Arkansas led by as many as 12 points in the first half before the Tigers rallied within 28-25 at the break.

Auburn took a 64-59 lead on a 3-pointer by Green with under three minutes left. But Arkansas came back to tie it at 66 when Williams scored underneath in the final half-minute of the second half.

The Tigers had the ball with 20 seconds left but could only get a long 3-point try by Green at the buzzer.

“We had a play set up. Wendell could have gotten downhill with a ball screen, but instead he chose to pull,” Pearl said. “He makes, it we win.”

In overtime, Auburn took a 68-66 lead on an putback by Allen Flanigan, then later went ahead 70-69 when Dylan Cardwell picked up a loose ball in the lane and scored.

The Razorbacks scored the next seven points, all on foul shots by Williams and Notae. Williams finished with 13 and 11 rebounds. Chris Lykes also hit a pair of clutch free throws for the Razorbacks.

Smith kept the Tigers close with a pair of 3s, the last pulling them within 78-76. But Arkansas nailed down the upset at the foul line.

“I give our players a lot of credit,” Musselman said. “The last couple days in preparation, shootaround, they truly believed tonight that they were going to win the game."

“We talked about being level. I thought a couple years ago against Kentucky, that we didn’t run out of energy from a playing standpoint. But emotionally, we got so sky-high at the beginning,” he said.

The win was the ninth straight for the Razorbacks, with eight of those in SEC play after opening 0-3. Arkansas’ last loss was at Texas A&M on Jan. 8 by 86-81.

Auburn’s win streak had a number of close calls in recent weeks, including 55-54 against Missouri and 74-72 against Georgia last Saturday.

Arkansas: Will be at Alabama on Saturday.