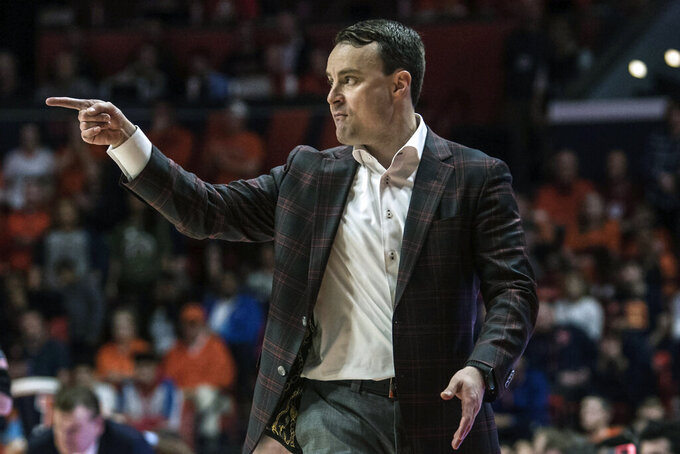 FILE - Indiana head coach Archie Miller reacts on the sideline in the second half of an NCAA college basketball game against Illinois in Champaign, Ill., in this Sunday, March 1, 2020, file photo. Miller has been trying to improve the Hoosiers perimeter game for three seasons. He may finally have the answer. (AP Photo/Holly Hart, File)

Miller may finally have the solution this season with a deeper, more versatile backcourt.

“Hopefully, it will give us a little bit more offense," he said. “We've spent a good bit of the fall talking about the way we move the ball, how we move it. But the one thing I'm consumed with is keeping those turnovers down to an all-time low.”

It's the best guard group Miller has had in four seasons as the Hoosiers coach and there's a little bit of everything in the mix.

Junior Rob Phinisee is an experienced, starting point guard. His backup, sophomore Armaan Franklin, has returned with more confidence. At 6-foot-4, Aljami Durham was the most consistent 3-point shooter last season at 38.3%.

Each is expected to play a significant role this season and they should give Miller the ability to turn up the tempo and spread the floor. And it could be just what Indiana (20-12 last season) needs to to get back to the NCAA Tournament.

“I think No. 1, we'll play more perimeter-oriented guys," Miller said. “The ball-handling, the passing, the I.Q. to play the game will hopefully lead to that. This team just can’t turn the ball over. It’s paramount to our efficiency."

The surprise addition of Lander in May gave Indiana's recruiting class a top-15 ranking and four players who could make an immediate impact.

How do the Hoosiers view the newcomers?

“Jordan is a freak athlete, he’s long, can play different places on the court and can stretch the floor,” Franklin said. “Trey is an all-around type of guy who can drive, shoot and is really athletic. Anthony is a knockdown shooter, big body guard who can create when he needs to, and Khristian is explosive, quick, can shoot it, can create for others.”

Trayce Jackson-Davis led the Hoosiers in scoring (13.5 points) and rebounding (8.4) on his way to third-team all-conference honors as a freshman. Instead of leaving for the NBA, Jackson-Davis returned so he could expand his repertoire and shooting range. The 6-foot-9 forward likes the results.

“For me, it’s really just been my confidence," he said. “I’ve been gaining that during the offseason, been getting a lot of reps in and expanding, expanding and expanding so when the season comes around, I’m ready to take those shots."

Indiana's No. 2 scorer, Devonte Green, graduated and its third-leading scorer, Justin Smith, left for Arkansas as a grad transfer.

Jerome Hunter came to Indiana after being a finalist for Ohio's Mr. Basketball Award. But he missed his entire freshman season with a leg injury and spent most of last season trying to work his way back into shape.

During the final part of the season, though, Hunter started to make the kind of impact Miller anticipated. This year, Miller believes the 6-7 forward could be ready for a breakthrough.

“You saw a young guy grow up and try to get better," Miller said. “Toward the end of the year, he shot the 3 much more consistently and he made big plays for us. So from a confidence standpoint, I think it was kind of like ‘Wow, I did it, I got through it' and now I think he’s ready to take a bite out of the next apple."

While Indiana hasn't announced a schedule yet, Miller does know a few things.

The Hoosiers will play in the Maui Invitational at Asheville, North Carolina, later this month, will visit Florida State in the ACC-Big Ten Challenge and will play Butler in the Crossroads Classic, currently set for Dec. 19 — the same date as the Big Ten football championship game.

“How do you plan when you don’t know? That’s the $1 million question," Miller said. “Every coach, every team is dealing with some circumstance of uncertainty. How we handle it, realistically, hopefully is better than other people."