It's on: Gonzaga vs. Baylor for the national championship 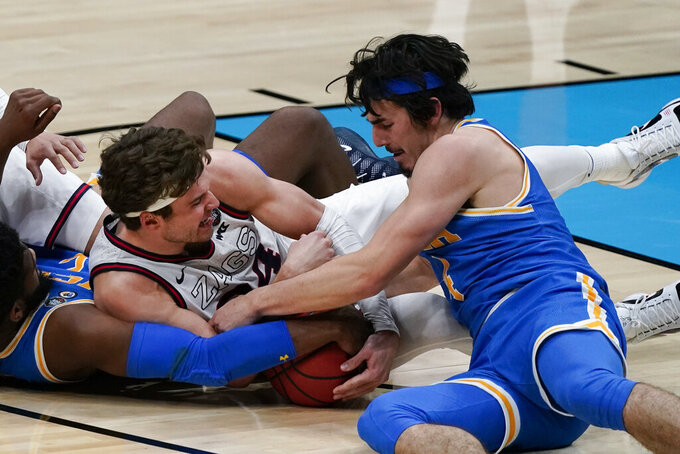 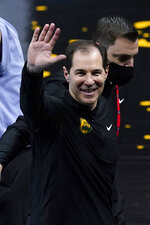 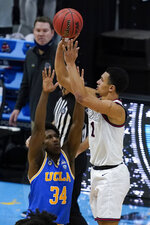 INDIANAPOLIS (AP) — Baylor made a mockery of the first Final Four game, stifling Houston for a chance at the program’s first national title. Then Gonzaga made miracles happen, winning on one of the greatest shots in NCAA Tournament history.

The showdown between Baylor and Gonzaga that was called off in December because of the coronavirus pandemic is finally back on, with the biggest stakes of all: The two best teams all season will play for the national championship Monday night.

The wait was worth it.

The Bears opened the first Final Four in two years by overwhelming Houston, 78-59, cruising to their first national championship game since 1948.

Gonzaga's free-flowing offense was struck down in the nightcap by UCLA, which slogged the game down enough to get it to overtime. Freshman Jalen Suggs came to the Bulldogs' rescue, banking in a 3-pointer from just inside the half-court line at the buzzer for a 93-90 win.

“At the end of it, you could tell how both staffs and all the players reacted that it was an all-timer,” Gonzaga coach Mark Few said.

The bid for the first undefeated team since Indiana in 1976 is still intact.

“It was nuts. I still can’t speak,” Suggs said. “I have a million things going on in my head. I just can’t believe that it happened.”

Baylor had seemed to lose some of its defensive mojo during a three-week COVID-19 pause late in the season. The rotations, not as sharp. The closeouts, not quite as close. But the Bears (27-2) rolled through the first four NCAA Tournament games, winning at a nearly 15-points clip, and seemed to have an extra jolt of energy in their first Final Four game since 1950.

Flying around Lucas Oil Stadium, Baylor had the Cougars (28-4) stumbling across the floor with wave after wave of defenders. The Bears made every shot a chore for Houston, switching or trapping ball screens to prevent open looks and collapsing in the paint whenever the Cougars did break free.

A defensive demolition that bodes well for the title game against the ultra-efficient Zags.

“It’s starting to feel like we’re back to where we were before the pause,” said Baylor’s Jared Butler, who had 17 points. “It’s great that this is the right time. We thought it was the worst thing possible when we stopped and it was a three-week break, but I think it worked out perfectly for us.”

The Bruins (22-10) did both to perfection in the first half.

The bogging down came via the slow roll. With coach Mick Cronin giving slow-down hand gestures, UCLA refused to run even when it had opportunities and methodically worked its offense in half court sets.

The shot-making part is something UCLA has been doing all through the bracket. Tough shots have fallen since the Bruins arrived in Indy and they kept dropping in the Final Four – 15 of 26, 4 of 7 from 3.

All those shots going in meant fewer rebounds, in turn meaning fewer opportunities for the Bulldogs to get out and do what they do best: run. Gonzaga made 17 of 28 shots, but led only 45-44 at halftime.

The Zags (31-0) were in a similar position in the West Coast Conference Tournament title game. They trailed by 14 in the first half, found their rhythm and won by 10.

The Bruins wouldn't let it happen to them. They kept making shots, taking it down to the wire.

Drew Timme took a late charge against Johnny Juzang in regulation to send it to overtime. After Juzang scored on a putback, Suggs provided the did-that-just-happen flourish, dribbling over the half court and letting it fly for the first buzzer-beater of the tournament.

“He’s got that magical aura,” Few said. “It’s been crazy this year how many he’s made in practice where (it’s on) last-second shots. I felt pretty good. I was staring right at it. I was like, ‘That’s in,’ and it was.”

A miracle finish, setting up what is sure to be a mesmerizing title game college basketball fans have waited two years to see.