Kansas reunion at Sweet 16 sign of times in college hoops 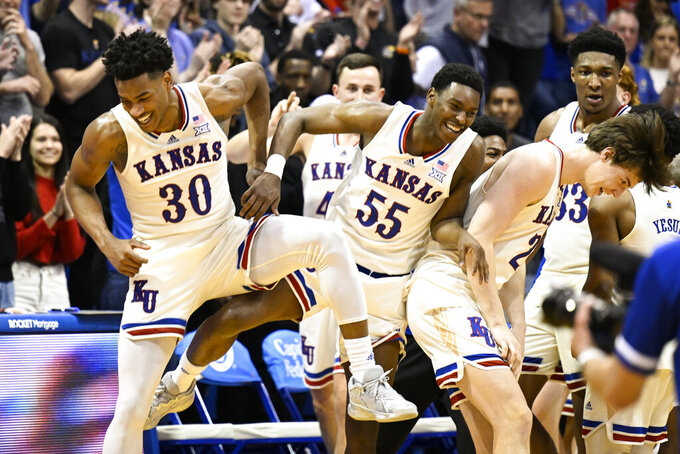 LAWRENCE, Kan. (AP) — There will be quite a reunion when Kansas and Providence join Iowa State and Miami at the Sweet 16 in Chicago this week, and it perfectly demonstrates the transient nature of college basketball these days.

The top-seeded Jayhawks, who face the Friars in the first Midwest Region semifinal Friday night, have on their bench sharp-shooter Jalen Coleman-Lands, who was part of the mass exodus from the Cyclones after last season.

Iowa State coach T.J. Otzelberger countered by landing Tristan Enaruna, who played for the Jayhawks last season. Enaruna will line up in the other regional semifinal Friday night against Hurricanes guard Charlie Moore, whose career odyssey began at Cal and included a pit stop with the Jayhawks before spending the past two seasons at DePaul.

Just about every team left in the NCAA Tournament has at least one key player who transferred from a four-year school. And while that was once a relative rarity because transfers would then have to sit out an entire year rules changes the past few years have made it easier than ever for players to continue their careers elsewhere.

Or in the case of Moore, bounce through three other Division I schools before landing in the Sweet 16 with the 'Canes.

No. 11 seed Iowa State has seven four-year transfers on its roster, which Otzelberger had to rebuild after taking the job last spring, and four came from power conferences. But it has paid off in a big way for Otzelberger, who has taken a two-win team from last season to the second weekend of the NCAA Tournament.

Penn State transfer Izaiah Brockington has been the catalyst for the Cyclones, averaging more than 17 points a game, but Enaruna has given Otzelberger key minutes off the bench in NCAA tourney wins over LSU and Wisconsin.

“A lot of times when guys are transferring, especially as older players, they talk about wanting to have more opportunity, more shots, be a focal point, potentially a go-to guy,” Otzelberger said. "My question right back at them is: How hard are you willing to work for it? What do you do extra? What’s your leadership ability? What do you do when things are hard?

“What I’ll say with a tremendous sense of pride,” Otzelberger continued, “is guys like Izaiah Brockington and (Minnesota transfer) Gabe Kalscheur, who have led us throughout the course of the season, those are guys that immediately talked about how hard they will work, how important it is to them to win games and play for pride for Iowa State. That meant a lot to me, and those guys have shown that throughout the course of our season.”

While stars have aligned to bring Coleman-Lands within a game of facing Iowa State for a spot in the Final Four, and Enaruna and Moore a win from facing the Jayhawks for a spot in New Orleans, there are numerous players at each of the regional sites that have ties to other teams still alive in the NCAA Tournament.

Another ex-Iowa State player, Rasir Bolton, is averaging 11.3 points for No. 1 overall seed Gonzaga, which plays Arkansas on Thursday night. The fourth-seeded Razorbacks lean heavily on Chris Lykes, a grad transfer from Miami.

The winner of that game could face Texas Tech — which plays Duke on Thursday night — where first-year coach Mark Adams has eight Division I transfers on the roster. One of them is Daniel Batcho, who redshirted last year at Arizona.

The Wildcats, another No. 1 seed who play Houston on Thursday night, feature Oumar Ballo, a 7-footer from Mali who played for Gonzaga last season. The Cougars counter with Kyler Edwards, their No. 2 scorer who spent three seasons with the Red Raiders, and Reggie Chaney, who played his first two years for the Razorbacks.

Many of those players transferred after coaching changes, one of the biggest reasons the NCAA has taken steps to make such moves easier. Others simply sought a new situation, better opportunities or a change of scenery.

All of them wanted a shot at playing in the Final Four. Given the number of Division I transfers still in the Sweet 16, at least a few will get their wish this weekend.

“It's something we dreamed of as kids,” Coleman-Lands said. “I mean, you watch basketball and you want to see it at the pinnacle. And this is where champions are defined.”