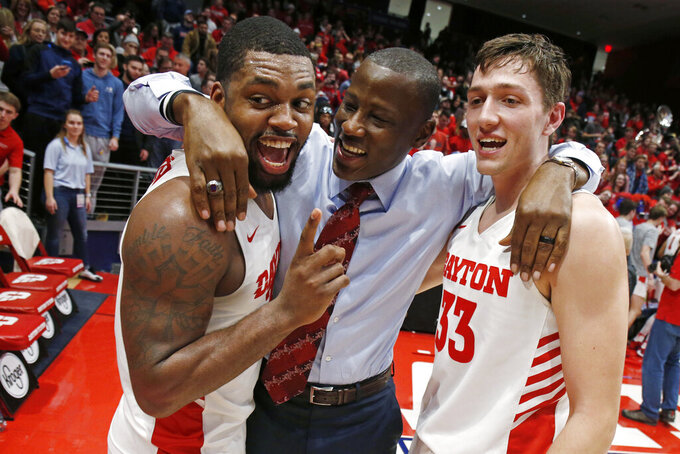 A string of losses to unranked opponents led to upheaval in the AP Top 25 this week.

Kansas kept winning, strengthening its grip on No. 1.

The Jayhawks were the unanimous choice for the top spot in The Associated Press men's college basketball poll released Monday, receiving all 64 votes from the media panel.

Gonzaga was No. 2, with Dayton, Baylor and San Diego State rounding out the top five. The Aztecs, No. 9 Maryland and No. 18 Iowa were the only other teams to hold their place after a week in which nine Top 25 teams lost to unranked opponents.

Kansas moved to No. 1 for the second time this season a week ago after knocking off previously top-ranked Baylor. The Jayhawks remained atop the poll after beating Oklahoma State and rival Kansas State.

With Baylor's loss to TCU, Kansas has a one-game lead in the Big 12 Conference with a week left in the regular season.

The Jayhawks host TCU on Wednesday and play at Texas Tech on Saturday.

Gonzaga bounced back from its loss to BYU, rolling over rival Saint Mary's 86-76 on Saturday to win its eighth straight West Coast Conference regular-season title.

Not bad for a team that lost four starters from last year's team and started the season with forward Killian Tillie sidelined with a foot injury.

“I've never had a team surprise me as much as this one did," Zags coach Mark Few said. “We don't have lottery picks. But they worked and listened and were coachable. Our whole is definitely greater than the sum of the parts."

Dayton has its highest ranking since reaching No. 2 in 1955-56 after stretching its winning streak to 18 games with victories over George Mason and Davidson last week.

The Flyers wrapped up the Atlantic 10 Conference title with an impressive offensive display against Davidson, shooting 72.3% — their highest percentage in 34 years — while making 27 of 28 shots inside the 3-point arc.

“It feels like everybody was locked in today,” said Dayton's Obi Toppin, who had 23 points in the 82-67 win.

No. 16 Michigan State had the week's biggest jump, moving up eight spots following victories over Iowa and Maryland.

No. 8 Seton Hall has its highest ranking since reaching No. 7 in 2000-01 after moving up five spots. The Pirates beat Marquette last week.

No. 25 Michigan had the biggest drop among teams still in the poll, falling six spots after losing to Wisconsin and Ohio State.

Reigning national champion Virginia returned to the poll at No. 22 after knocking off Virginia Tech and Duke.

Illinois moved in at No. 23 following wins over Indiana and Ohio State.

No. 24 Wisconsin is ranked for the first time this season after victories against No. 25 Michigan and Minnesota.

West Virginia dropped out of the poll from No. 20 after losses to unranked Texas and Oklahoma.

Colorado also had a pair of losses to unranked opponents, California and Stanford, to fall out from No. 21.

Texas Tech had the same type of week, losing to Texas and Oklahoma, to drop out from No. 22.