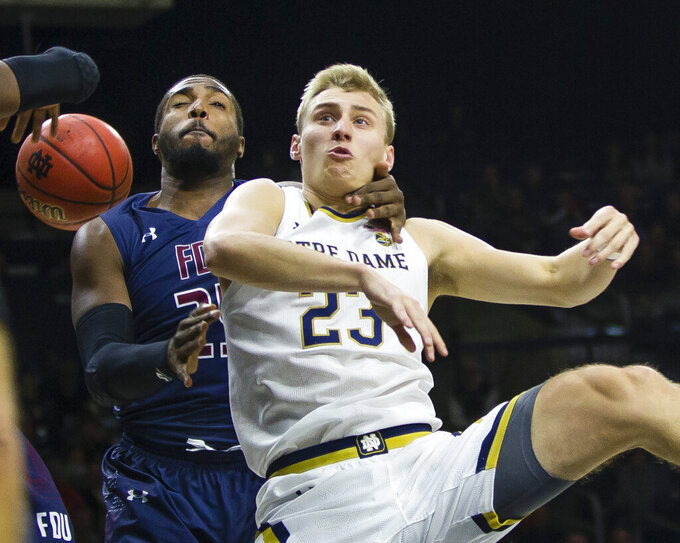 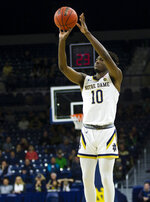 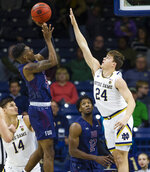 SOUTH BEND, Ind. (AP) — Sophomore reserve Nate Laszewski is on a roll and so is Notre Dame, which had six players in double figures in winning for the sixth straight game with a 91-66 runaway victory over Fairleigh Dickinson Tuesday.

“I thought we brought a lot of juice,” said the 6-foot-10 Laszewski, who scored a team-high 16 points and had three blocked shots five days after knocking down a 3-pointer at the regulation buzzer that allowed coach Mike Brey’s Fighting Irish to eventually beat Toledo in overtime, 64-62.

Led by Laszewski and fellow sophomore Dane Goodwin, who had 15 points, Notre Dame’s bench finished with a 38-19 edge over the Knights, who lost their fifth straight.

“Both those guys are gifted guys,” Brey said. “Last year it was hard to get them to be aggressive offensively. They were too nice. They weren’t physically or mentally ready. I think they are now. They are great weapons.”

John Mooney had his fourth double-double with 13 points and 13 rebounds for the Irish, whose only loss is their 76-65 Atlantic Coast Conference opener Nov. 6 at now No. 6 North Carolina. Juwan Durham had 12 points, 11 rebounds and four blocked shots, and T.J. Gibbs had 11 points and Rex Pflueger 10 for the Irish.

Pflueger, playing his fifth season after missing much of last season following knee surgery, likes what the bench is providing Notre Dame. Notre Dame shot 51% from the field, outrebounded FDU 44-33 and had 24 assists on their 32 baskets, 12 from 3-point range.

“I’m so proud of them,” said Pflueger of Laszewski and Goodwin. “The steps they have made since last year is incredible. You can see it in their eyes and their bodies. They’ve really matured.”

Brey also likes what Mooney and Durham are providing. “To go double-double with your starting frontline guys is really powerful,” Brey said of Mooney and Durham, who are roommates. “They look at each other as a tag-team group.”

Coach Greg Herenda’s Knights (1-5) lost their fifth straight despite a game-high 17 points from Xzavier Malone-Key. Kaleb Bishop had a double-double with 10 points and 10 rebounds, and teammates Brandon Rush and Elyjah Williams also scored 10 points for FDU, which was never in it from the start.

“We’re a little banged up,” said Herenda, whose team started 0 for 18 against the Irish and were playing without Jahlil Jenkins. “We got good shots. In Durham and Mooney, they have rim protectors and then they close out well.”

Notre Dame jumped out to a 13-0 lead hitting five of its first seven shots before Herenda called a timeout with 15:14 left as his team missed its first eight shots.

Fairleigh Dickinson: The woeful shooting start by the Knights, who won the Northeast Conference regular-season and tournament titles to earn an NCAA bid, doomed them from the start. That’s not a good harbinger of things for FDU’s next road excursion Dec. 7 at No. 9 Kentucky.

Herenda, whose brother graduated from Notre Dame, gave Brey $3 for the candle he lit at Notre Dame’s Grotto of Our Lady Monday night after the team’s arrival from New Jersey.

Fairleigh Dickinson: The Knights return home to play Quinnipiac Tuesday before their visit to Kentucky.

Notre Dame: The Irish, who won six games at Purcell Pavilion in 17 days, play for the first time on the road since their loss at No. 9 North Carolina when they visit No. 5 Maryland in the ACC/Big Ten Challenge next Wednesday.