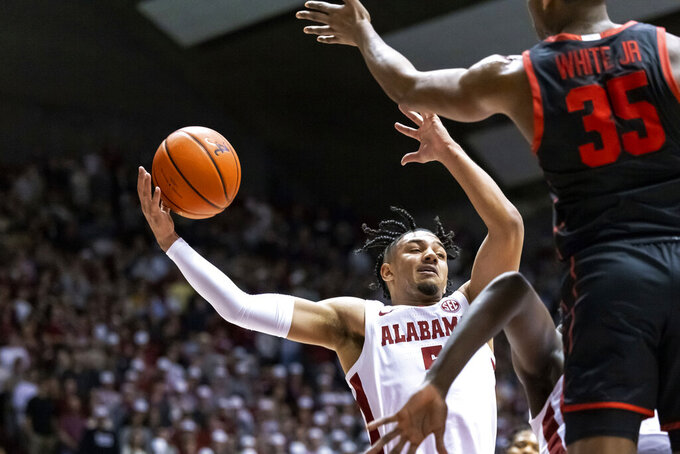 Alabama guard Jaden Shackelford grabs a rebound against Houston during the first half of an NCAA college basketball game, Saturday, Dec. 11, 2021, in Tuscaloosa, Ala. (AP Photo/Vasha Hunt) 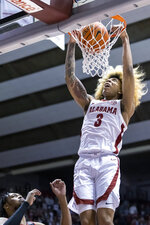 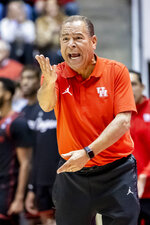 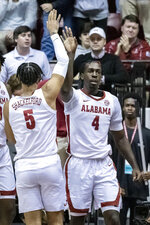 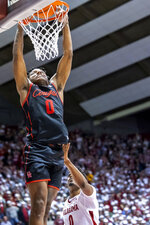 TUSCALOOSA, Ala. (AP) — Alabama got a huge dunk from JD Davison and then survived a final sequence that left Houston seething.

The freshman's putback dunk with 33 seconds left and a final defensive stop gave No. 9 Alabama a 83-82 victory over No. 14 Houston on Saturday night for the Crimson Tide's second straight win over a team coming off a Final Four run.

The Tide (8-1), which defeated No. 5 Gonzaga last weekend in Seattle, survived three late attempts by Houston (8-2). Kyler Edwards missed a 3-point attempt and two putback attempts didn't go in — with Davison swatting the last one out of bounds as the clock ran out.

“It was crazy,” Alabama's Jahvon Quinerly said of the go-ahead dunk. “I just looked up and I saw him flying. That was a huge play. His athleticism is off the charts."

So was the Cougars' mood after the non-call. Houston coach Kelvin Sampson and several players followed the officials off the court, arguing Davison's swat was goaltending. Houston's leading scorer, Marcus Sasser, had to be held back by teammates.

“It was goaltending," Sampson said simply. “He knocks that the ball off the rim and there’s no call. That’s just a tough way to go down.”

Alabama coach Nate Oats was celebrating the win, but could empathize with the Cougars' complaint, whether he agreed or not.

“If I was in their shoes, I would be looking for a goaltending, too,” Oats said.

Juwan Gary topped his career-high by halftime and finished with 19 for the Tide against a team that had been allowing just 53.4 points a game, second-best nationally. Jaden Shackelford scored 18 and made 5 of 7 3-pointers, including two big ones late. Quinerly had 17 points and eight assists, and Davison finished with 10 points and nine rebounds.

“It was an unbelievable game,” Oats said.

Sasser led the way for Houston with 23 points, despite making just 8 of 25 shots. Jamal Shead and Josh Carlton both scored 14 points and White had 11. J'Wan Roberts had nine points and 13 rebounds — including nine of the Cougars' 21 offensive boards.

Shackelford hit back-to-back 3-pointers, making a foul shot after the first, for an 81-79 lead in the final three minutes. The score stayed that way after a Tide layup was waved off because of basket interference against Keon Ellis with 1:18 to play.

Then Sasser buried a 3-pointer to give Houston the lead before Davison slammed it home off a missed jump shot by Quinerly.

Houston called a timeout with 25 seconds left to set up the final play, and exited wondering what happened to the whistle.

“We played good enough to win,” Sampson said. “The whistle blows, we walk out of here with a great win. Let’s not sit here and overanalyze this. Both teams played their hearts out. Our kids deserved to win the game.”

Houston: The Cougars successfully navigated serious foul trouble, with six players picking up multiple fouls in the first half.

Alabama: Bama played back to back nonconference games against top 15 teams for the first time in 20 years, and delivered big wins in both.

The teams combined for 49 fouls, including an early technical against Oats. Alabama made 24 of 31 free throws but had both Charles Bediako and Noah Gurley foul out.

For Houston, which made 11 of 19 foul shots, Edwards and Reggie Chaney drew their fourth foul in the opening minutes of the second. Alabama shot 20 free throws before the half.