Marquette uses strong 2nd half to beat No. 9 Creighton 89-84 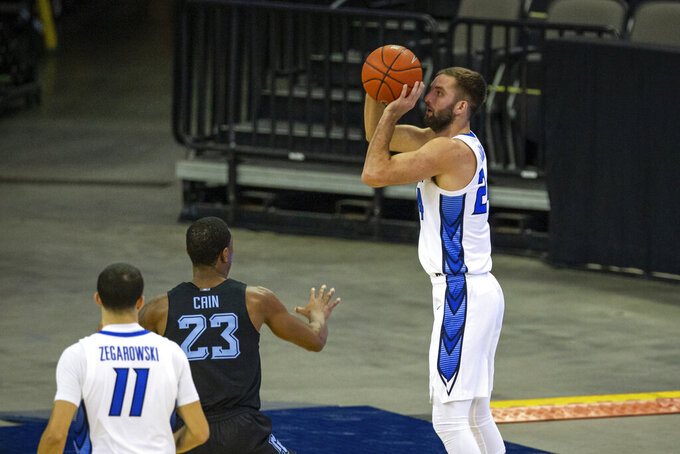 OMAHA, Neb. (AP) — Marquette clamped down on Creighton's shooters in the second half, made a few adjustments on the offensive end and left CHI Health Center with its second win over a top-10 opponent in two weeks.

D.J. Carton scored a career-high 20 points, and Greg Elliott and Dawson Garcia combined for 23 of their 28 in the second half to lead the Golden Eagles past No. 9 Creighton 89-84 on Monday night.

After halftime, Marquette went 7 of 9 on 3-pointers and shot 55% while its defense cooled off a Bluejays team that made nine 3s in the first 20 minutes.

“No. 1, we took care of the ball and did a good job of not having empty possessions with turnovers,” Golden Eagles coach Steve Wojciechowski said. “We got our big guys the ball in the paint and we got some really strong drives from perimeter guys. We’re used to kind of bombing people out with 3s. We can make good shots, but we have to play through the paint.”

Mitch Ballock went 8 of 13 on 3s and had a season-high 26 points to lead Creighton. Denzel Mahoney added 21 points

“Disappointing. That goes without saying,” coach Greg McDermott said. “Offensively, we played plenty good enough to win the game. But there wasn't a lot of resistance."

The Golden Eagles, who won at No. 4 Wisconsin on Dec. 4, beat the 2019-20 Big East regular-season co-champions for the first time in four meetings. They held Creighton to one field goal over five minutes while using a 19-7 spurt to create a 75-63 cushion with 5 1/2 minutes left.

“In the second half we did a great job taking up the space of their shooters. We didn’t get broken down on the dribble," Wojciechowski said. "The second half we had a really complete performance on both ends of the floor.”

The Bluejays ran off nine straight points to get to 76-75. Carton made a 3 and Garcia hit a jumper and a putback to make it 83-75, but it was back to a three-point game when Ballock hit the last of his 3s.

Carton missed a free throw but Marquette kept possession on a tie-up under the basket. Koby McEwen made two free throws for an 85-80 lead with 30 seconds left.

Creighton struggled at the free throw line in the second half, making only 11 of 22.

“If I had a locker room full of freshmen and sophomores, we would practice about three hours tomorrow and we'd stay there until we got it fixed," McDermott said. “I've got a locker room of really mature guys. When they watch the film, it's not going to whisper to them, it's going to scream to them the areas we are falling short.”

Marquette: The Golden Eagles are one of the best defensive teams in the Big East, and they showed it in the second half when they held the conference's top shooting team to 44% from the floor.

Creighton: The Bluejays lost for the first time in 12 home games. The best thing to come out of the game was the re-emergence of Ballock, who has had difficulty finding shots before breaking out in a big way.

Elliott had career highs with 14 points and four 3s, and no one was happier for him than Wojciechowski.

The redshirt junior guard has been plagued by thumb and ankle injuries that have required two surgeries since 2017.

“Everything he's gone through, with most guys it would have broken them,” Wojciechowski said. “I think you’re starting to see him round back into the form that we’ve always believed he could have.”

One of the prettiest passes of the season set up Ballock’s 3 to beat the halftime buzzer.

Marcus Zegarowski started driving the lane and kicked the ball out to Antwann Jones on the left wing. As Elliott closed in, Jones leaned to his right to snag the ball, then whipped it behind his back without looking to Ballock in the corner. As two defenders closed out on him, Ballock swished his shot as the clock hit zeros to make it 44-35.