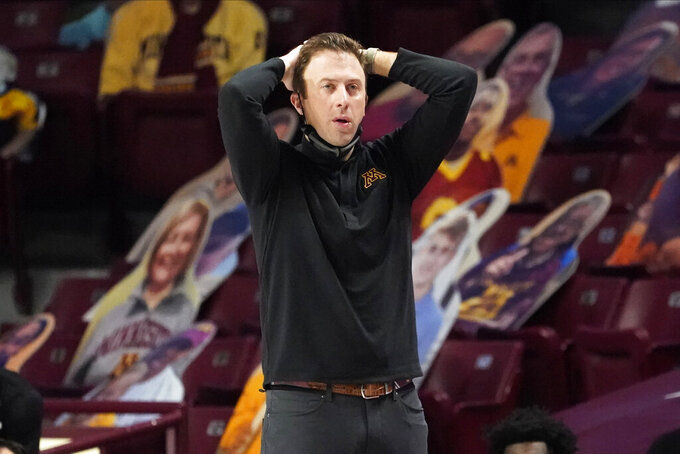 After an amicable split with Minnesota, Richard Pitino headed west for New Mexico, no longer a young man relying more on name recognition than coaching experience.

Both the mid-major team he's inheriting and the power-conference program he's leaving behind are searching for a spark to bring fans back to their storied arenas.

Hours after Minnesota finalized his firing following eight seasons on the job, the 38-year-old Pitino was hired as New Mexico's coach to succeed Paul Weir, who went 58-63 in four seasons for the Lobos.

“He is his own person. He knows his name is a name he’ll carry with him the rest of his life, and he owes a lot to his dad for giving him an opportunity, but the fact is he has built the successes and the reason he is here today is because of who he is and what he has done,” New Mexico athletic director Eddie Nuñez said on a video conference call with reporters.

Dad in this case, of course, is Rick Pitino, the Hall of Fame coach who has returned this year to the NCAA Tournament with his fifth different team, Iona.

When Minnesota picked Richard Pitino for the job, he had one season of prior experience as a head coach at Florida International and was far from the first choice.

Though Pitino went just 54-96 in conference play with only three finishes in the rugged Big Ten higher than 10th place, he took the Gophers to the NCAA Tournament twice and went there five other times as an assistant at Louisville under his father and at Florida with Billy Donovan. Two of Pitino's other teams at Minnesota, including this year, were on an NCAA Tournament track before injuries led to a late-season demise.

“I love Minnesota. It was an eight awesome years, but I’ve landed in a spot where I know we can win big,” Pitino said on KFAN radio in the Twin Cities.

Nuñez played for and coached under Donovan. Gophers athletic director Mark Coyle was another vital reference for Nuñez, who also considered former Nebraska coach Tim Miles among others for the vacancy. Coyle and Pitino grew close, even though Coyle didn't hire him, and the strength of their relationship made an impression on Nuñez.

“He is one of my favorite people. I respect him. I know he’s going to do wonderful things at New Mexico, but in terms of at Minnesota, I just felt like it was time in my heart that we needed to go in a different direction and try to find a new leader to help us accomplish the goals that I firmly believe we can accomplish here,” Coyle said.

New Mexico last reached the NCAA Tournament in 2014, in coach Craig Neal's first year. The Lobos, playing in the Mountain West Conference, went three times in six seasons under Neal's predecessor, Steve Alford. Playing in their eclectic arena, The Pit, they've had their share of strong teams over the last several decades.

“The way people view this program is so high, and it has earned that because of the passionate fan base that we have,” Nuñez said.

Nuñez said he was working on a six-year contract for Pitino with an annual salary similar to what Weir had ($775,000). At Minnesota, Pitino's base salary was $2 million. His $1.7 million buyout will be significantly lessened by his new employment. Coyle declined to be specific about how much.

The Gophers play at Williams Arena, the 93-year-old, barn-shaped building with the uniquely raised floor that some analysts and boosters have pointed to as a hindrance to sustained success for the program in such an unrelenting conference with big-spending competitors.

Pitino, in his radio interview, said he didn't think recruits were dissuaded by it. He does, however, believe it's a factor in declining attendance when fancier professional-team venues are surrounding it in the area with the NHL's Wild, the NBA's Timberwolves, the NFL's Vikings and MLB's Twins.

“The fans, we’re asking a lot of them, to come at 8 o’clock on a Wednesday night in the cold weather,” Pitino said on KFAN.

Since reaching the Final Four in 1997, a season that was later vacated by NCAA infractions, the Gophers have won a grand total of two NCAA Tournament games.

Pitino thought so, too.

“We did some good things. We really did. I’m not going to sit here and defend and say I did the greatest job in the world, but there’s a lot I’m certainly proud of,” he said. “I'm proud of what we did, and hopefully someone can come in and make it better.”