No. 12 Illini's offense facing test against No. 19 Wisconsin 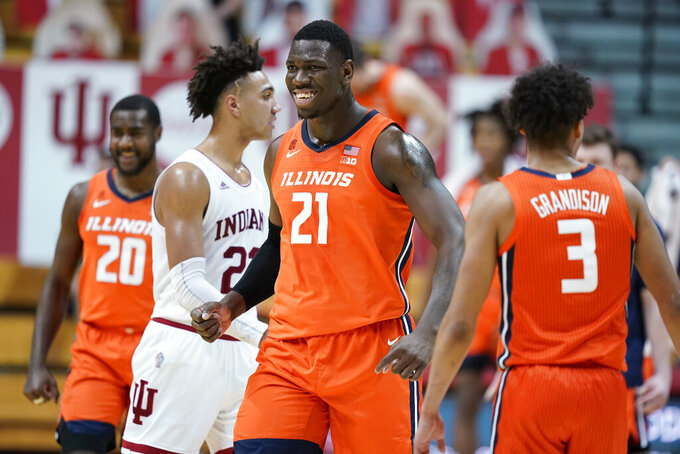 GAME OF THE WEEKEND: No. 19 Wisconsin (14-5, 8-4) at No. 12 Illinois (12-5, 8-3), Saturday. The Badgers are in a win-one, lose-one pattern now and need to get on a roll if they hope to stay in the Big Ten race. The Illini are in a nice rhythm, having picked up a huge win over Iowa last week and an overtime win at Indiana Tuesday. The game matches the Big Ten's No. 2 offense in Illinois against the No. 1 defense. In the previous meeting, in January 2020, Illinois won 71-70 for its first victory over the Badgers since 2011.

LOOKING AHEAD: The Big Ten might have 10 teams in the NCAA Tournament, and it doesn't look like Michigan State will be one of them. Tom Izzo's Spartans are 8-7 overall, 2-7 in conference play and were No. 92 in the Wednesday's NET rankings. The Spartans have played in 22 straight NCAAs, but they're mired in a four-game losing streak for the first time since 2007 and face a difficult final stretch of games that includes meetings with Michigan (twice), Iowa and Ohio State.

PLAYER TO WATCH: Ron Harper Jr. scored all 13 of his points in the second half and hit a clutch shot with two minutes left to key Rutgers' 64-56 win at Northwestern on Sunday. Harper is averaging 17.3 points but isn't scoring at the rate he was earlier in the season. Still, Harper's all-around game makes him the centerpiece on a team pushing toward its first NCAA Tournament appearance since 1991.

INSIDE THE NUMBERS: Illinois' Kofi Cockburn leads the nation with 12 double-doubles. ... Nebraska will have gone 26 days between games when it visits Michigan State on Saturday. The Cornhuskers paused team activities because of a COVID-19 outbreak. ... When No. 7 Ohio State visits No. 8 Iowa on Thursday, it will be the first time since 1961 they've met when both are ranked in the top 10. ... Maryland was 1 for 12 on 3-pointers in the first half and 8 for 13 in the second in its 61-60 win over Purdue on Tuesday. ... Minnesota's Marcus Carr had a streak of 18 double-figure scoring games end against Purdue and was held without a point in a first half for the first time since Dec. 9, 2019, at Iowa.

ON THE WOMEN’S SIDE: No. 10 Maryland's 92-52 victory over Michigan State last week was its 100th in league play since joining the Big Ten in 2014-15. The Terrapins are 100-13 (.885) in conference games. ... No. 11 Ohio State and Maryland entered Thursday as the only two teams in the country with five players averaging better than 11.5 points. ... No. 22 Northwestern's Veronica Burton is a candidate for best all-around game with 20 points, a career-high 15 rebounds, nine assists and four steals against Ohio State on Monday. ... Rutgers returns from a month-long COVID-19 pause when it plays at No. 17 Indiana on Thursday night.