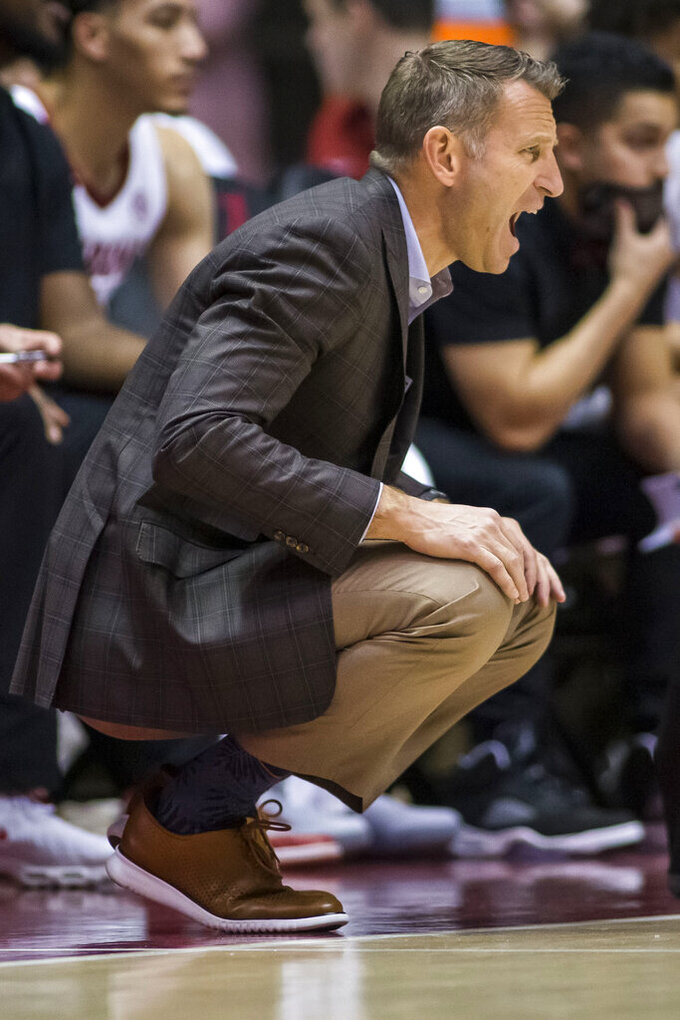 Alabama head coach Nate Oats yells to his players during the first half of an NCAA college basketball game against South Dakota State, Friday, Nov. 12, 2021, in Tuscaloosa, Ala. (AP Photo/Vasha Hunt) 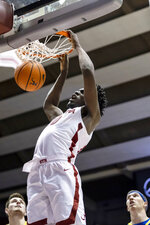 TUSCALOOSA, Ala. (AP) — Jahvon Quinerly scored 26 points and Jaden Shackelford had 23 to lead No. 14 Alabama to a 104-88 victory over South Dakota State on Friday night.

The Crimson Tide (2-0) parlayed several second-half flurries into a comfortable win after the Jackrabbits (1-1) kept it to within one for a bit after coming back out of the locker room.

“They gave us everything we could handle,” Alabama coach Nate Oats said. “They outscored us in transiton, they exposed a lot of stuff we need to work on. That’s why we play these games, though. It’s good that we can get a win, while we got plenty of stuff exposed.”

South Dakota State couldn't quite keep up with Quinerly, Shackelford & Co. at times when Alabama was able to turn up the tempo and start making 3-pointers.

“Coach preaches getting three stops in a row, a kill is what we call it,” said Quinerly, a preseason All-Southeastern Conference pick. "We were able to guard a couple of possessions and get stops consecutively.

“I feel like our transition defense needs some work after this game, but I was still proud of the fight we showed tonight.”

Keon Ellis had 15 points and a career-high 13 rebounds for the Tide, which had five players score in double figures. Darius Miles had 13 and seven-foot freshman Charles Bediako scored 12 points on 6-of-7 shooting with six rebounds.

“They told me to do it and I got it done,” Bediako said.

Like Alabama as a whole, Quinerly didn't have a hot shooting night but kept firing away. He made 4 of 15 3-pointers.

It was a one-point game until Alabama made three 3-pointers in a quick 13-2 spurt to make it 54-42 early in the second half. The Tide answered every rally attempt from there.

“They're really talented obviously, and offensively they just have so many weapons,” Jackrabbits coach Eric Henderson said. "And they can get downhill, and they're such a willing passing team. They share the basketball very well.

“They just seemed to answer every one of our runs.”

Alabama missed its first four free throw attempts and didn't make any until Ellis hit two with just over 7 minutes left. The Tide is 2-0 for the first time in Oats' three seasons.

South Dakota State: The preseason favorite to win an eighth Summit League regular-season title in 10 years kept it close much of the way, but couldn't quite keep up the pace. Outrebounded 47-38, and Wilson's limited minutes didn't help.

Alabama: The Tide, which won the opener 93-64 over Louisiana Tech, had a much harder time partly because the 3-pointers weren't falling early. Alabama went 13 of 40 but did make 8 of 19 after the half.

Alabama forward Juwan Gary injured his right ankle in the first half and didn't return. He was helped to the locker room after sprawling out next to the Tide bench.

Oats said Gary would get the ankle examined Saturday morning.