No. 15 Auburn reloads after losing Smith, Kessler to NBA 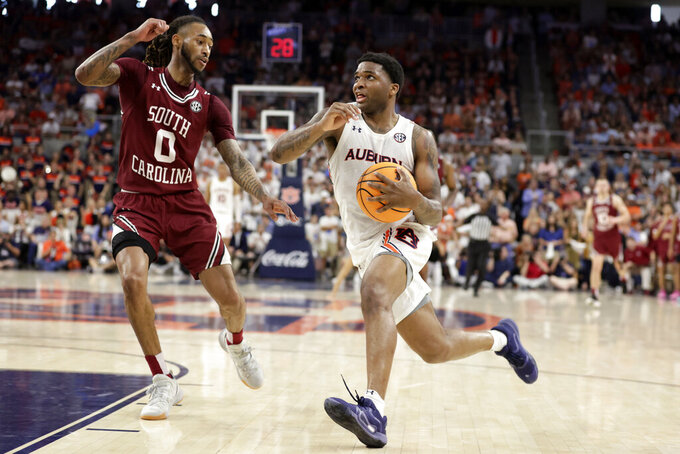 The Auburn Tigers have arrived as a basketball program.

That’s evidenced not only by their first Final Four appearance and No. 1 ranking under coach Bruce Pearl, it’s also clear in how many players they’re losing early to the NBA without dampening the expectations.

The preseason No. 15 Tigers are having to replace first-round draft picks Jabari Smith and Walker Kessler, who both played only one season in Auburn. But they led Auburn to a stint atop the national rankings for the first time before Miami crashed the party with a second-round NCAA Tournament upset.

“Last season, there was a period where we were the best team in college basketball, which is pretty special,” said Pearl, who led Auburn to the Final Four in 2019. “And I really thought almost every game we played last year, for the first time in my career, I think I had the better team.”

This one figures to be pretty good, too, even without a dominant, versatile talent like Smith and Kessler's 7-foot-1 presence around the basket.

Pearl’s backcourt is mostly returning intact with Wendell Green Jr., K.D. Johnson and Zep Jasper, and he also brought in a pair of 6-foot-10 potential replacements. Freshman Yohan Traore is a five-star prospect and Morehead State transfer Johni Broome was the Ohio Valley Conference defensive player of the year.

Auburn has huge voids to fill in the frontcourt with Smith being the program’s top recruit and Kessler earning national defensive player of the year honors.

Traore is a native of Tours, France, who was rated as the No. 15 recruit nationally in the 247Sports composite rankings.

Broome averaged a double-double last season for Morehead State and was a finalist for the defensive player of the year honors won by Kessler. Pearl isn't predicting those two will be the next Smith or Kessler, but feels good about both as replacements for some of those minutes and production.

“I don’t know how we could do any better,” Pearl said. “Really, really good players. Really good prospects. Great kids.”

Jaylin Williams and Dylan Cardwell are also back in the frontcourt.

Auburn has lost five one-and-done players to the NBA after three years if you fudge and count Kessler, who played his lone season as a transfer. Auburn had only four NBA draft picks in 25 years before 2019.

Johnson and Green were as exciting as they were at times frustrating for Auburn fans. The two talented but somewhat erratic guards are back and so is Jasper, a defensive stopper.

Pearl said Johnson has grown on and off the court and become quicker since losing some weight in the offseason and has “positioned himself for a big year.”

Pearl thinks depth is a strength of the team, with competition continuing at most starting spots. The only sure thing appears to be Green.

“I've got 13 really good players. There is great competition and depth at every position,” he said. “If I had to put out a starting five right now, I would tell you really, truly there's only one position of the five where I know who's going to start.”

Auburn will be the only team to play in the home arena of three Power Five nonconference opponents. The Tigers open Nov. 7 against George Mason. They visit USC (Dec. 18), Washington (Dec. 21) and West Virginia (Jan. 28). Auburn also faces Memphis Dec. 10 in Atlanta.