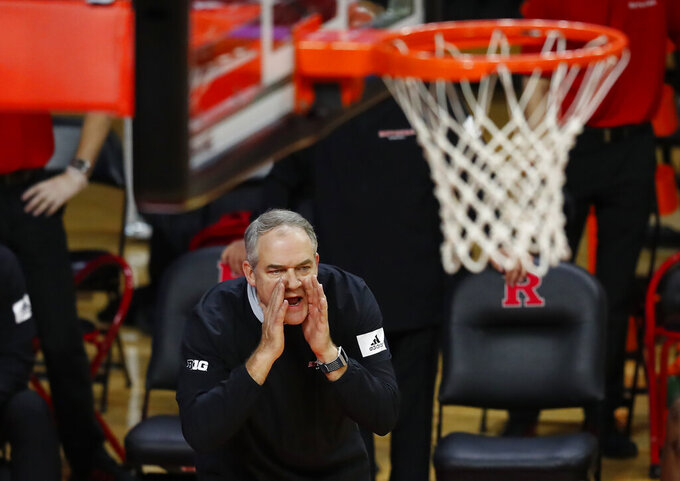 Rutgers coach Steve Pikiell and his 15th-ranked Scarlet Knights didn’t have long to regroup from a loss to highly ranked Iowa in Big Ten play. That’s because of what is always looming on the schedule in a league with a national-best seven ranked teams.

Rutgers and No. 16 Minnesota illustrate that this week with tough games that highlight the week's AP Top 25 schedule. For the Scarlet Knights, that means a trip to No. 23 Michigan State to face a team it has never beaten, followed by a game against an Ohio State team that beat Rutgers before Christmas.

As for the Gophers, they go on the road to No. 10 Michigan on Wednesday and then visit the fifth-ranked Hawkeyes on Sunday.

“We’re on to the next obstacle this league brings,” Pikiell said after his own team's loss to Iowa over the weekend. “You’ve got to have a short memory in this conference. The next game’s just as hard, it’s harder.”

Rutgers (7-2, 3-2 Big Ten) beat Maryland and No. 12 Illinois in December in league play, but the Scarlet Knights lost on the road to the Buckeyes on Dec. 23. Then, after beating Purdue, they lost 77-75 to the Hawkeyes over the weekend.

The Gophers (10-2, 3-2) are coming off a win against Ohio State and beat Iowa in overtime on Christmas. They first face an unbeaten Wolverines team that made the week's biggest jump (six spots) before facing a Hawkeyes team looking to avenge that earlier loss.

As Pikiell put it: “That is life in a league like this that we play in.”

Fourth-ranked Texas is playing this week with the program’s highest ranking in nearly a decade.

The Longhorns (8-1, 2-0 Big 12) jumped four spots after a lopsided win at No. 6 Kansas, pushing Texas to its highest ranking since last cracking the top 5 in February 2011 under former coach Rick Barnes. Now Shaka Smart’s team has a week that includes Tuesday’s home game against Iowa State and Saturday’s visit to No. 14 West Virginia.

No. 1 Gonzaga and No. 2 Baylor have sat atop every poll this season. They both play twice this week while trying to remain unbeaten.

The Bulldogs (10-0) host Santa Clara in West Coast Conference play on Thursday, then visit Portland on Saturday. The Bears host Oklahoma on Wednesday in the Big 12, then visit TCU on Saturday.

Third-ranked Villanova’s return is on hold.

But that game is one of three to be postponed for Villanova, followed by Friday’s game against Marquette.

Also on hold is St. Louis, which tied Michigan State at No. 23 to earn the program’s first appearance in the AP Top 25 since the 2013-14 season.

The Billikens paused team activities last Wednesday and their games at La Salle (Wednesday) and Saint Joseph’s (Saturday) are postponed.

Florida and Louisville are the top vote-getters among the unranked teams.

The Gators visit Alabama in Southeastern Conference play Tuesday, then host struggling Kentucky on Saturday. The Cardinals, who spent two weeks in the poll in December, host No. 19 Virginia Tech on Wednesday followed by Georgia Tech on Saturday.