No. 2 Arizona pulls away late for 81-69 win over Stanford 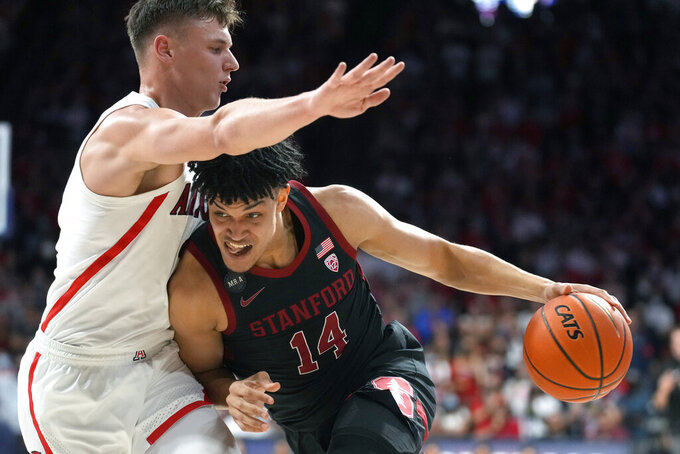 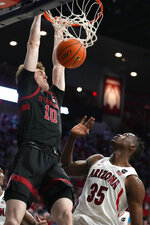 TUCSON, Ariz. (AP) — Arizona had to rebound from the mental rush of winning the Pac-12 regular-season title against Southern California two nights earlier. The physical toll of long travel delays was an even tougher challenge, causing a sluggish start against a hungry opponent.

The Wildcats fought their way through it to remain undefeated at home in their first season under coach Tommy Lloyd.

“That USC game seems a month ago to me, but it was less than 48 hours,” Lloyd said. “I'm proud of the way they bounced back.”

The Wildcats (27-3, 17-2 Pac-12) clinched their first Pac-12 title in four years against No. 16 Southern California on Tuesday, then waited through a slog of plane issues that led them to getting home after 4 a.m. on Wednesday.

The short turnaround seemed to take its toll early against Stanford. The Wildcats struggled getting shots to fall, allowed the Cardinal pick them apart defensively and fell into a nine-point hole.

Arizona appeared to get a jolt of caffeine just before halftime to track the Cardinal down, kept it rolling to start the second half and pulled away to continue its roll into next week's Pac-12 Tournament in Las Vegas.

“We were hot since the start of the season and I think it surprised some people,” said Arizona's Pelle Larsson, who had six points. “Now it's March and this is what we play for.”

Stanford (15-14, 8-11) got blown out at home in the first meeting with Arizona and was coming off one of its worst offensive performances of the season against rival California. The Cardinal were much sharper the second go-round against the Wildcats, hitting two more field goals in a torrid-shooting first half (12) than they did the entire game against Cal.

Stanford had some breakdowns just before halftime to allow Arizona to keep it close, then struggled with the Wildcats' defensive pressure in the second half and lost for the sixth time in seven games.

Spencer Jones scored 22 points and Michael O'Connell, who averages seven, gave Stanford a big lift with 16 points — all in the first half.

“The pressure bothered us some. We had some open looks that didn’t go in that maybe went in in the first half,” Stanford coach Jerod Haase said.

Arizona played one of its best games of the season against USC, rolling to a 91-71 victory to clinch the Pac-12 crown. The Wildcats weren't nearly as sharp early against Stanford, struggling to get shots to fall while coughing up careless turnovers.

Arizona also struggled defensively against a Stanford team that scored 39 points and shot 24% — 4 for 18 from 3 — in a 14-point loss to Cal in its last game. The Cardinal shot 15 of 28 in the first half against Arizona, including 7 of 10 from 3. O'Connell hit all four of his 3-pointers before the break.

“We did a better job handling pressure and had a better game plan this game,” Haase said. “Obviously, when the ball goes in everything looks better.”

Arizona kept itself within reach by scoring 16 points off Stanford's 11 turnovers, then hit its final six shots to pull to 39-37 at halftime.

The Wildcats got it rolling at both ends in the second half, defense leading to breakouts and early-offense opportunities. Mathurin had two breakaway dunks during an individual 8-0 run that put Arizona up 67-58, and the Wildcats kept stretching the lead from there.

Stanford had a good defensive plan and moved the ball well to get open looks in the first half. The Cardinal weren't as sharp in the second, bothered by Arizona's defensive pressure, and missed several open shots.

Arizona needed some time to find a flow at both ends of the floor. Once the Wildcats did, they stretched the lead and prevented any type of run by the Cardinal.

Arizona has hammered teams all season with its hi-low offense, often between Koloko and Azuolas Tubelis.

Stanford took away the Wildcats' hi-low most of the night, often by rotating a player behind Arizona's low-post option.

“We had a lot of support, tried to get help in there,” Haase said. “We played screens a little bit differently, put ourselves in some mismatch situations and our guys really fought and competed.”