No. 20 Alabama banking on improved defense and better March 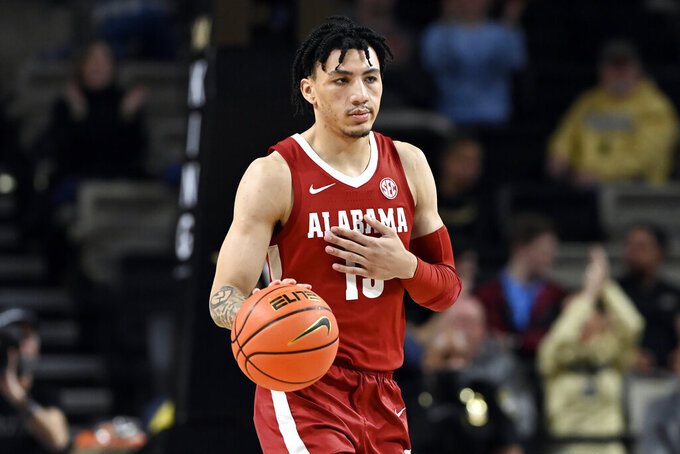 FILE - Alabama guard Jahvon Quinerly (13) plays against Vanderbilt during the second half of an NCAA college basketball game on Feb. 22, 2022, in Nashville, Tenn. Alabama must replace three of its top four scorers, and No. 2 scorer Quinerly is out for the start of the season recovering from knee surgery. Head coach Nate Oats is hoping to have him back by late December. (AP Photo/Mark Zaleski, File)

The 20th-ranked Crimson Tide has talent both returning and incoming, but plenty to improve on from a season that crashed to a halt with a first-round NCAA Tournament exit after an end-of-season skid. A team that had risen as high as No. 6 lost its final four games.

“It’s going to be a huge point of emphasis every single day all year,” he said. “Just how good can we be on defense. How connected can we be. Our depth is a lot better, so we can hold guys a lot more accountable to play defense. If you’re not going to guard, we’re just not going to play you.”

Alabama must replace three of its top four scorers, and No. 2 scorer Jahvon Quinerly is out for the start of the season recovering from knee surgery. Oats is hoping to have him back by late December.

Oats brought in a pair of five-star recruits, guard Jaden Bradley and forward Brandon Miller, to highlight a class that ranked No. 3 in the 247Sports composite ratings. He's banking on the newcomers to help Alabama improve its 3-point shooting, having ranked 300th nationally in percentage from long range.

Starters foward Noah Gurley and 7-foot center Charles Bediako are back. Guard Nimari Burnett, a Texas Tech transfer, is eligible after sitting out last season with a knee injury.

“We need a lot of production out of the new faces,” Oats said. “We’re looking to try to be peaking at the end of the year, so we may go through some growing pains early in the year.”

Alabama had a disappointing ending after getting upset by No. 11 seed Notre Dame in the first round of the NCAA Tournament. The team had gone 3-0 against 2021 Final Four teams, Baylor, Gonzaga and Houston.

“They should have a big chip on their shoulder,” Oats said of his players. “We proved that we could play with the best teams in the country.”

But, he added: "We weren’t playing our best basketball come March."

McDonald's All-Americans Miller and Bradley were rated the No. 15 and 17 recruits nationally, and both could play big roles early.

Oats called the 6-foot-9, 200-pound Miller the most college-ready freshman he has had at Alabama, a group that includes first-round NBA draft pick Josh Primo, and second-rounder Davison. Miller is a preseason second-team All-SEC pick.

“He’s a 6-9 guard that can pass, dribble, shoot,” Oats said. “He’s got great poise. He’s got to get a litttle stronger. He’s put some decent weight on over the summer. needs to continue to put weight on.”

Alabama faces three of the top four teams in the preseason rankings, No. 2 Gonzaga, No. 3 Houston and No. 4 Kentucky. The Tide also has nonconference games against Michigan State, Memphis and Oklahoma.

“As you can see, we love competition,” Bediako said. “We're always looking for the hardest teams to play.”