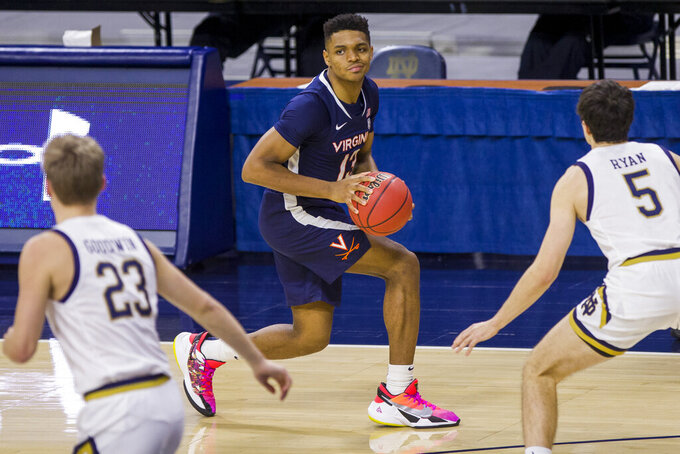 “Weebles wobble, but they don’t fall down,” Bennett said after the No. 23 Cavaliers relinquished almost all of an 11-point second-half lead, then pulled away late for a 66-57 victory over the Fighting Irish on Wednesday night.

“Our young guys don’t know what that is,” Bennett said of the old-time toy, “but we wobbled a couple times, but we didn’t fall down.”

Kihei Clark had 19 points and five assists as No. 23 Virginia continued its string of dominance over Notre Dame.

The Cavaliers (5-2, 1-0) improved to 12-0 in Atlantic Coast Conference openers under Bennett and 10-0 in ACC regular-season matchups against the Irish.

“Durham and Laszewski hurt us,” Bennett said. “We’ve got to kind of shore up against some of these good fours and fives (positionally).”

“Our two big guys did play great,” Notre Dame coach Mike Brey said. “We’ve got to build on that even though we didn’t win the game.”

The Cavaliers led at every count except 2-2 and were up 35-24 by early in the second half, but the Irish twice clawed within one point, the last time at 47-46 with 8:26 remaining.

Notre Dame also had a chance to tie it at 54, but Cormac Ryan’s wide open 3-pointer rimmed around and softly out.

“I thought Cormac’s 3 in the corner that was halfway down was key,” Brey said after Ryan finished the night scoreless on four attempts. “We missed that one, (then) they made one (a 23-footer by Trey Murphy III), and that was kind of our last shot.”

Virginia: The Cavaliers, after plunging from No. 4 in the preseason poll to No. 23 in the latest one, bounced back on the heels of their 98-75 loss against No. 1 Gonzaga on Saturday. Now they play six of their next eight at home as they look to climb back up the rankings.

Notre Dame: The Irish extended their dubious program record for consecutive losses against ranked teams to 25, including 0-4 this season. They’ve not defeated a Top 25 club since edging No. 6 Wichita State 67-66 in November 2017. Five currently ranked teams are on ND’s remaining schedule, too, although none higher than Florida State at No. 18.

Bennett praised the supportive noise coming from the Virginia bench after he felt his team went flat on the sideline as well as on the court against Gonzaga.

The Cavaliers had even practiced a couple cheers going into Wednesday’s game.

“We went old school,” Bennett said. “We asked some of the guys what were some of your best chants when you were in AAU or high school.”

With largely empty arenas during the pandemic, bench noise has a chance to become more pivotal, according to Bennett.

“This is unlike anything as far as atmosphere,” Bennett said. “(Bench noise) is really important.”

The Irish, trailing 30-23 at the time, lost starting guard Trey Wertz to a left ankle injury with 30 seconds to go in the first half.

Brey estimated that Wertz might miss “a couple weeks.”

The junior transfer from Santa Clara just gained eligibility on Dec. 16. He had averaged 12.7 points and 3.3 assists over his first three games for Notre Dame.

Wertz had just one point against the Cavaliers before getting hurt.

Virginia: The Cavaliers host No. 24 Virginia Tech on Saturday in a showdown between rivals smack next to each other in the rankings.

Notre Dame: The Irish are scheduled to play Saturday at Pittsburgh, but the game remains in jeopardy after the Panthers’ contest against Duke on Tuesday was postponed when Pitt announced a positive COVID-19 test within its program.