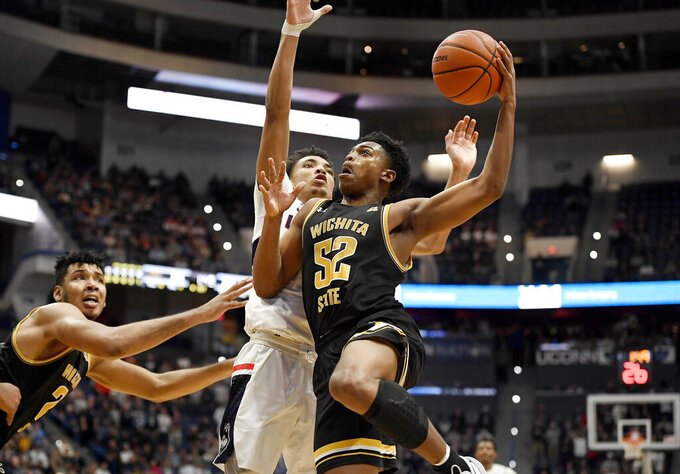 Wichita State's Grant Sherfield, right, goes up for a basket against Connecticut's James Bouknight, back center, in the first half of an NCAA college basketball game, Sunday, Jan. 12, 2020, in Hartford, Conn. (AP Photo/Jessica Hill)

HARTFORD, Conn. (AP) — Wichita State gave up a nine-point point lead in just over a minute at the end of regulation and had two key players foul out during two overtimes.

But the Shockers found a way to get their ninth consecutive win, and eighth straight on the road dating to last season, as they held off UConn 89-86 on Sunday.

“I thought we were tremendously tough and ratty, pursuing balls and getting stops,” coach Gregg Marshall said. “Both teams just fought like crazy and left it all out there.”

Wichita State seemed to have the game in hand, leading 69-60 with 1:05 remaining after a pair of free throws from Stevenson.

But the Huskies' pressing defense forced several turnovers, including a shot-clock violation that gave the Huskies the ball down 69-66 with just over 10 seconds left.

Sidney Wilson’s 3-pointer from the left baseline tied the game, and he blocked Dennis’ shot to force overtime.

“I didn't really expect to get the ball. We had set a play up for somebody else,” said Wilson, who scored 12 points. “It just happened to be in my hands and I made the shot. Then after that I knew they were going to have 2 seconds on the clock to be able to make something happen, so I just made an attempt on the ball.”

A 3-point play by Dennis in the paint gave the Shockers a two-point lead late in the first OT. But Josh Carlton, who finished with 13 points and 12 rebounds, made two of four free throws on separate possessions and Tyson Etienne missed a contested shot under the basket at the buzzer to send the game into a second overtime.

Etienne opened the second extra period with a three-point play and Wichita State never gave the lead back.

“It was a definitely gut punch,” Etienne said of the way the Shockers lost the lead in regulation. “But a team like us, a young team, we needed to go into some type of environment like this. We needed to go on the road and come back and win it.”

UConn had a chance to tie, but Morris Udeze drew a charge on Gilbert. After two missed free throws by Burton at the other end, Vital missed a 3-pointer with 2 seconds left.

The Shockers were playing only their second true road game of the season. They previously won at Oklahoma State.

“That was rock bottom,” Marshall said. “That was the last very poor performance that we had last year. But since then ... we've had a lot of good wins, including this one."

UConn played without forward Tyler Polley, who suffered a knee injury in practice on Friday and will miss the remainder of the season. UConn said the junior tore the ACL and medial meniscus in his left knee. He is scheduled to undergo surgery this coming Friday. Polley started every game this season. He averaged 9.5 points and 3.2 rebounds and scored 19 points with a career-high 11 rebounds Wednesday in a win over Tulane.

The Shockers made 54% of their shots in the first half and held UConn without a field goal for almost six minutes to build a 33-23 lead.

The Huskies cut that to 35-30 at the half after a hustle play from Vital, who dove into the stands to save a loose ball, starting a break that ended with a put-back dunk from Wilson.

UConn also travels to Philadelphia for a game on Saturday against Villanova.