Once marred by racist rally, Charlottesville revels in win 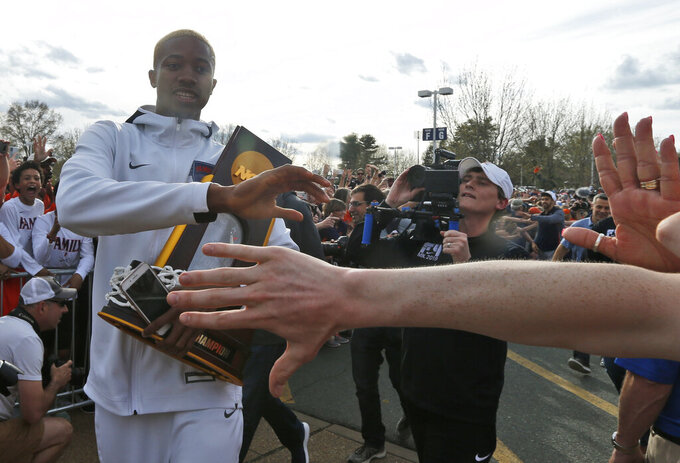 Charlottesville was in full party mode a day after the U.Va. Cavaliers defeated Texas Tech in the title game. Supporters, waking up from a night of celebration, flocked to the school's basketball stadium parking lot to give the team a hero's welcome.

While awaiting the team, fans erupted in random cheers while trading stories about how stressed they had been watching the Cavaliers' successful tournament run, which featured come-from-behind victories in the final seconds of several games. Monday's championship game was settled in overtime.

The crowd cheered deliriously as the team arrived at the stadium carrying the national championship trophy. Coach Tony Bennett told reporters he was gratified to see the team's victory bring so much joy "in light of all this community's been through."

"There's an amazing story that has been written from this and I think it's going to encourage a lot of people," Bennett said.

The ebullient mood was a marked departure from nearly two years ago, when a white nationalist rally held to protest the removal of a Confederate statue erupted in violence in 2017, leaving a woman dead and dozens injured. Three years earlier, a bogus magazine story about a gang rape at a University of Virginia fraternity house haunted the city, which was still dealing with the slayings of two female university students in 2014 and 2010.

"We were due for some good coverage for a change," said Matilda Foster, who waited for hours to be at the front of the crowd welcoming the Cavaliers back from Minneapolis. She said the team's success has unified the city and surrounding area.

"This is a really big event for this region and the city that's been kind of back on their heels," Toscano said.

Charlottesville and the University of Virginia have had more than their fair share of painful headlines.

In August 2017, the white supremacists who had gathered to protest the removal of a statue of Confederate Gen. Robert E. Lee clashed with people who showed up to protest the racism. Later, a self-avowed white supremacist intentionally plowed his speeding car into a crowd of counterprotesters, killing a woman and injuring dozens. President Donald Trump further inflamed the situation by refraining from condemning the white nationalists. Instead, he remarked of the protesters and counterprotesters that there were "very fine people on both sides."

In 2014, the magazine Rolling Stone published a story portraying U.Va. as a school where sexual assaults were rampant and unpunished. A woman identified as "Jackie" in the article told the magazine she was raped by seven men at a fraternity house in September 2012. But an investigation by police in Charlottesville found no evidence to back up the claims.

Rolling Stone later retracted the article and apologized. Also that year, U.Va. student Hannah Graham was abducted from a Charlottesville bar and slain. In 2010, U.Va. lacrosse player Yeardley Love was killed by a fellow student. And just last month, all city schools were closed for two days after racist threats of violence were made online. Police later charged a 17-year-old boy for making the threats.

Heidi Price, a fan who showed up to greet the team, said it was "great to have something positive to focus on."