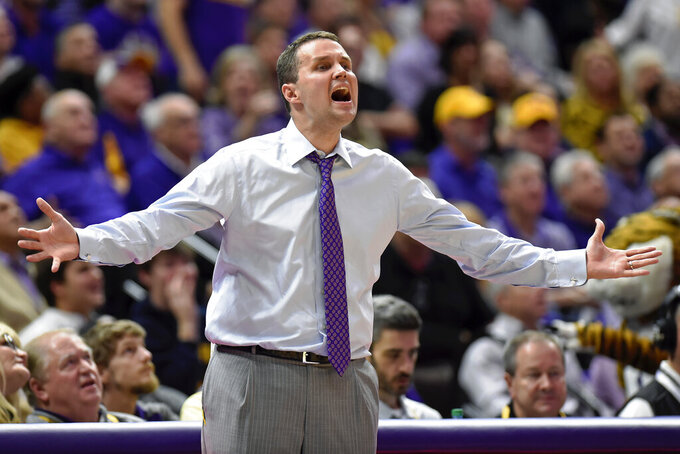 LSU coach Will Wade voices his displeasure about a foul called on one of the team's players during the first half of an NCAA college basketball game against Kentucky, Tuesday, Feb. 18, 2020, in Baton Rouge, La. (AP Photo/Bill Feig) 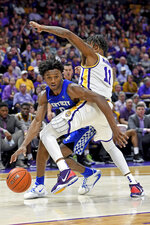 Quickley scored 21 points and Kentucky made a timely string of 3-pointers in a 79-76 victory over LSU on Tuesday night.

“Richards totally controlled the game defensively,” LSU coach Will Wade said. “He's as good as there is in the league.”

Kentucky made seven of eight 3s in the second half, when graduate transfer Nate Sestina hit three, including two during an 8-0 run that widened the Wildcats' lead to 15 points with 5:14 to go.

“We left him wide open," Wade said, lamenting a frustrating pattern of defensive breakdowns during the past five games, of which the Tigers (18-9, 9-4) have lost four. “He’s a good college player. Of course he’s going to make a wide open shot.”

Richards' basket inside with 49 seconds left helped slow a furious Tigers rally that had trimmed Kentucky's lead to 75-70 on Marlon Talyor's 3 with 1:30 to go.

LSU (18-8, 9-4) pulled to 78-74 on Charles Manning Jr.'s driving floater off the glass with 19 seconds left. But Quickley made a free throw with 11 seconds remaining and the Tigers weren't able to put home their final basket until less than a second remained.

Kentucky: The SEC-leading Wildcats continue to demonstrate they can stay in games even during stretches in which they don't shoot well. They never trailed by more than four points, even while shooting just 31.6% in the first half and missing eight of their first 10 3s. They led 29-28 at halftime took command when they shot 73.9% in the second half.

“At halftime, I said, ‘We’re up 1 and we cannot make an open shot. We missed 10, like open — wide open,'” Calipari said. "I’m whistling and dancing, skipping, going to the locker room. We can't make a shot and we're still up one? And so in the second half we made the shots, which is why we went up 14 or 15.”

LSU: The Tigers outrebounded Kentucky 45-33, thanks in large part to 23 offensive rebounds. But a number of LSU's second-chance attempts were missed put-backs than appeared to be rushed in an effort to avoid having even more shots rejected by the tall and athletic Wildcats. LSU missed 13 of 20 3-point shots, and Wade pointed out that front-court starters Days, Emmitt Williams and Trendon Watford were a combined 9-of-33 shooting. “That's not going to get it done,” Wade said.

While Kentucky struggled offensively in the first half, its length and athleticism was evident on the defensive end. The Wildcats blocked eight shots during the opening 20 minutes, with Richards swatting away five.

“I always say, ‘If you have no post presence, your team’s a fraud,’" Calipari said.

Early on, LSU's Williams energized the crowd when he took a no-look bounce-pass from Javonte Smart and went up strong for a right-handed, roundhouse dunk over Richards. But Richards, who entered the game with a team-high 54 blocks this season, responded by rejecting two of Williams' shots — in addition to shots by Smart and Days — later in the half.

“We haven’t seen a rim-protector as good as Nick Richards and just probably a post presence in general," Mays said. “He did a good job controlling the paint and made it tough for us and that’s kind of our bread and butter.”

LSU finished the first half shooting marginally worse than Kentucky at 31.3% and the Wildcats took a 29-28 lead into halftime on Hagans' 3 a half-minute before the horn.

While Hagans played more than 31 minutes, he finished the game out of the lineup and with an ice pack on his left leg.

Calipari said he did not have an update on Hagan's condition after the game, but added, "I did tell the team, ‘We played well without Ashton.’ That will get him back fast.”

Wade said it's up to his players to communicate better on the court and put an end to second-half defensive breakdowns that have plagued LSU recently.

“Hopefully there will be an improvement. If not, we'll be playing home games in the NIT,” Wade said, adding that lineup changes are not an option. “We're playing who we have to play. Those guys have to get it fixed. We've exhausted all options.”