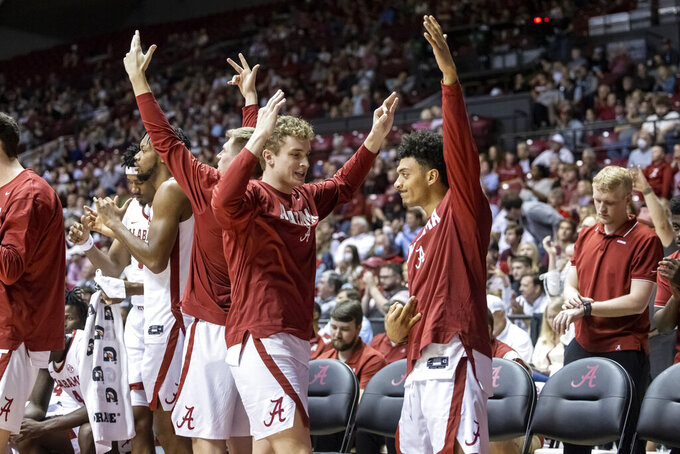 Alabama's bench celebrates a 3-point shot during the second half of the team's NCAA college basketball game against Mississippi State, Wednesday, Feb. 16, 2022, in Tuscaloosa, Ala. (AP Photo/Vasha Hunt) 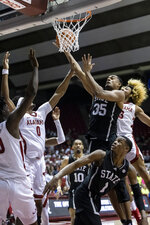 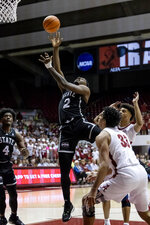 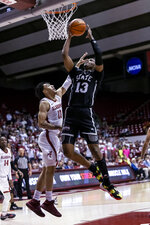 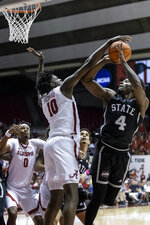 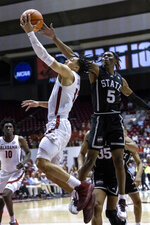 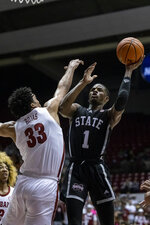 TUSCALOOSA, Ala. (AP) — Jahvon Quinerly had 21 points and eight assists to lead No. 25 Alabama to an 80-75 win over Mississippi State on Wednesday night.

“He’s playing aggressive, downhill. I thought he was playing like we’ve been wanting him to play,” Alabama coach Nate Oats said of Quinerly. “He wasn’t in his head too much; when he missed some he just kept playing. This is the Jahvon we’ve seen in practice.”

Alabama outscored Mississippi State 16-9 in the final seven minutes of the game, turning a four-point deficit into a five-point win. Davison made a layup and a free throw to give Alabama the lead with 5 minutes left.

“I never had the feeling of, ‘Here we go again.’ I always had confidence that we were going to win the game,” Mississippi State coach Ben Howland said.

Alabama made five free throws in the final minute to keep the lead: one by Shackelford, two by Quinerly and two by Miles.

Mississippi State closed within five points in the final minute, but couldn’t complete the comeback.

Oats was ejected in the second half after being whistled for two technical fouls, arguing with referees over foul calls.

“I screwed up,” Oats said. “I thought the staff did a great job. Charlie (Henry), (Antoine) Pettway and Bryan (Hodgson) rallied the guys together. I thought there was a foul, they didn’t call it. I had been on them. I probably shouldn’t have gone as hard at them as I did when I already had one (technical).”

The road game against a ranked opponent was one of the last opportunities Mississippi State had to notch a win that would impress the NCAA Tournament selection committee.

The Bulldogs were not projected as a NCAA Tournament team before Wednesday, and dropping an opportunity at a road win may end their hopes of an at-large bid, because four of their remaining six games are against teams 10th or worse in the SEC standings.

“I would like to say no pressure, but we just got to come out there and play our hardest,” Molinar said. “Sometimes you have to put pressure on yourself because we have to win these games, we have to execute and win these games at the end. I’m going to talk to my guys and tell them we need to execute, we need to have confidence down the stretch.”

Alabama: At Kentucky on Saturday; Alabama lost to the Wildcats at home 66-55 on Feb. 5.