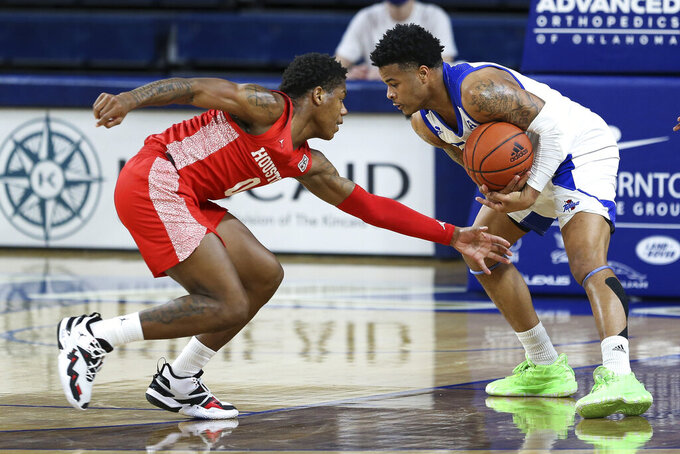 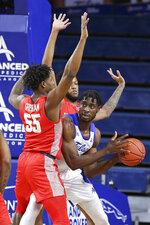 TULSA, Okla. (AP) — Frank Haith has coached various teams to some huge wins over the years, and he wanted everyone to know how much Tulsa's gritty performance against unbeaten No. 5 Houston meant to his team.

“This one was special,” Haith said of Tulsa's 65-64 win on Tuesday night. “Houston is one of the best teams in the country. I hope everyone understands that.”

Tulsa needed a last second dash to the basket by senior all-conference forward Brandon Rachal, who was fouled with one tenth of a second remaining and made both free throws to upend the Cougars.

The victory lifted Tulsa to 2-1 in the American Conference, 5-3 overall. Houston (2-1, 7-1) had won its first seven games handily, the closest being a nine-point victory over UCF.

It was the first victory over a top-5 team for Tulsa since winning at UCLA in 1996.

After Caleb Mills made a 7-foot floater with six seconds left to give Houston its first lead in the final 13 minutes of the game, Rachal took a pass, drove the length of the court and was fouled by center Brison Gresham at the rim a fraction of a second before time expired.

Rachal went to the line and calmly made both free throws.

“There was no pressure,” Rachal said. “I said to myself, you’ve made every free throw tonight, just do it the same way. You shoot free throws every day, just knock it down. The second one felt a little short, I’m not gonna lie, but when I saw how it bounced and went over I knew it was going to drop.”

Tulsa entered the game shooting 58.2% on free throws and made 18 of 22 to hold off the Cougars.

“We just kept putting them on the line and they kept making them,” Houston coach Kelvin Sampson said. “These kids are human beings. They are not going to be great every night and not going to win every game. It felt like we were fighting uphill all night.”

Ahead by one at halftime, Tulsa built a six-point advantage several times in the second half, but the Cougars never lost touch, tying the game at 62-all on an offensive rebound by Marcus Sasser. Rey Idowu made one of two free throws to give Tulsa a 63-62 lead before Mills put the Cougars ahead.

Quentin Grimes led Houston with 19 points and seven rebounds. Sasser had 14 points and Mills 11 for Houston.

Tulsa clawed back from an early 15-7 deficit, tying the game at 15 on consecutive 3-pointers by Curtis Haywood, who entered shooting 20% from long range. Houston pushed its lead back to five points, but another 3-pointer by Haywood pulled Tulsa within 24-22.

Tulsa took its first lead at 27-26 on a 3-pointer from another unlikely source, Darrien Jackson, whose shot from the left corner was his first 3 of the season on four attempts. A drive by Elijah Joiner bounced four times on the rim before dropping as time expired, giving TU a 31-30 lead at the break.

The Cougars lead the American Conference in rebounding margin, turnover margin and steals.

Tulsa has consistently outperformed its preseason prognostications in the American, tying for first a year ago after being picked ninth. The Hurricane’s gritty performance against Houston shows TU may be able to better its sixth-place prediction for this season.

Houston shot just 35% from the field, including 19% on 3-pointers (4 of 21) and were unable to overwhelm Tulsa with their physicality, as they have most opponents. They outrebounded Tulsa 38-35.

Rachal did most of his damage inside on drives and offensive rebounds, but his step back 3-pointer as the shot clock expired that gave Tulsa a 60-54 advantage with 5:12 left was huge for the Hurricane.

Tulsa embarks on a two-game conference road trip at Cincinnati on Saturday, followed by a game at UCF on Wednesday.