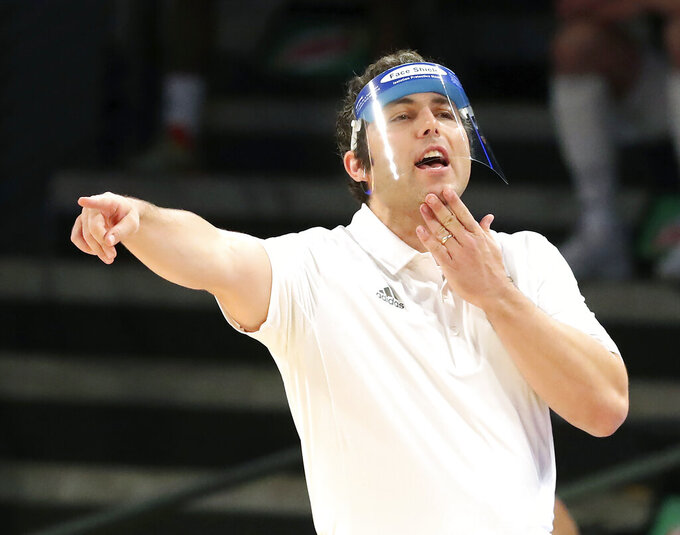 Georgia Tech head coach Josh Pastner wears a face shield while coaching his team against Georgia State during the first half of an NCAA college basketball game, Wednesday, Nov. 25, 2020 in Atlanta. (Curtis Compton/Atlanta Journal-Constitution via AP) 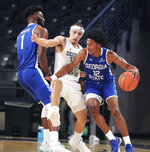 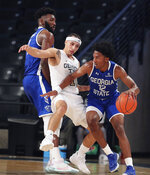 ATLANTA (AP) — Georgia State coach Rob Lanier wanted his players to appreciate how rare it is to play in a four-overtime game.

“During the timeouts, we were talking about getting stops and rebounding the basketball but we also talked during the game about loving the opportunity, loving what’s going on and enjoying every minute of it and continuing to be tough and sticking together," he said. “That’s what I wanted to see."

The game devolved into a free-throw shooting contest as the overtimes ticked by for the two schools separated by about three miles. They met on the Georgia Tech campus with a few hundred fans scattered across McCamish Pavilion because of the coronavirus pandemic.

Bubba Parham’s heave from just beyond half court hit high off the backboard for Georgia Tech as the final buzzer sounded.

“We turned it over too much, gave up too many offensive rebounds and we fouled a lot but we showed a lot of heart and resilience and a great deal of togetherness, so it’s a good sign for us that we’ve got a chance to have a really good team," Lanier said. “I’m really proud of the guys tonight."

Moses Wright finished with 31 points and 20 rebounds and Alvarado had 29 points in the first four-overtime game in Georgia Tech history.

“My ankles hurt, my shoulders hurt, whole body’s hurt, honestly," Wright said. “We’ve just got to do recovery and get ready for Mercer Friday. There’s no time to mourn over this. We’ve got to get right back into it."

Georgia State won its first game over an Atlantic Coast Conference school in 27 tries. Eliel Nsoseme had 22 points and Kane Williams added 21 for the Panthers.

Georgia State matched its biggest lead of the game when Corey Allen’s driving layup put the Panthers up 55-44 at the 14:33 mark. Wright gave the Jackets their first lead since 15-13 with a pair of free throws that made it 72-70 with 4:34 left.

Both teams had a chance to win it in regulation, but Georgia State’s Justin Roberts lost the ball for a turnover with 18 seconds to go and Devoe missed a pullup jumper in the lane with four seconds remaining.

After an uneventful first overtime, the Panthers took a four-point lead on two free throws by Roberts with 1:05 to go. Devoe followed with an inside basket to trim the lead to 96-94, and Georgia State committed a turnover.

Alvarado hit a pair of throws to make it 96-all with 7.6 seconds remaining, and Roberts missed a straightaway 3 as the final seconds ticked off the second overtime.

The third overtime ended with Alvarado hitting one of two free throws to make it 110-108, and Collin Moore hitting a pair for Georgia State to send it to a fourth OT.

Georgia Tech finished 339th in the nation with an average of 16.4 turnovers last season. The Jackets had 11 at halftime and finished the game with 22.

Georgia State outscored Georgia Tech 64-50 in points in the paint.

“I’m taking a lot of pride in that because I’ve got to be a better interior defender and losing James (Banks) really hurts us," Wright said, “but I’ve got to step into those shoes and learn how to rotate better and learn how to contest shots at the rims better so we can get the rebounds and start our fast breaks."