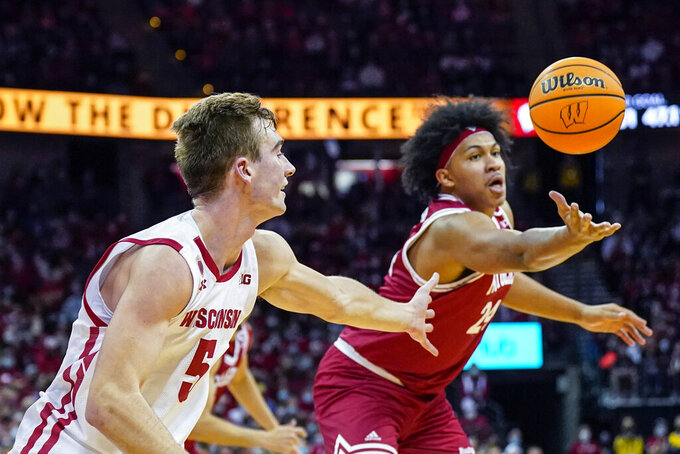 MADISON, Wis. (AP) — Rutgers understands it must prove it can beat quality teams on the road to get back into consideration for the NCAA Tournament.

The Scarlet Knights took a giant step in that direction Saturday by winning at Wisconsin for the first time and posting their third straight victory over a ranked opponent. Ron Harper Jr. scored 21 points and Rutgers went on a late 11-0 run in a 73-65 victory over the 14th-ranked Badgers.

“It was huge," Harper said. “I told the guys it's the same 40 minutes of basketball we're playing if we were playing in New Jersey. The game is dependent on us. It's not dependent on the crowd. We love our home-court advantage, but we're the dudes with the jerseys on. We've got to make plays.”

This marks the first time in program history they've beaten a Top 25 team in three consecutive games. Of course, part of that is due to a quirk in the schedule enabling Rutgers to face a ranked team in three straight games. The last time Rutgers won three straight matchups with Top 25 foes was back in the 2001-02 season.

“I think it shows growth, toughness, togetherness — stuff we've been working on,” said Paul Mulcahy, who scored 18 points and made a 3-pointer that put Rutgers ahead for good. “Guys are playing for each other and playing hard 40 minutes. I'm proud of everybody.”

Rutgers has a 4-1 record against Top 25 teams this season and owns four wins over ranked Big Ten teams for the first time ever. Rutgers also beat a top-ranked Purdue team on Dec. 9.

Even so, the Scarlet Knights began the day just 94th in the NET rankings, giving their postseason hopes little margin for error. Rutgers owns a 3-7 road record and dug itself a deep early hole with a three-game November skid that included losses to DePaul, Lafayette and UMass.

“I tell these guys every time we go out on the court, we're going to fight for our lives,” Harper said.

Rutgers has tried to make up for that early slump by stepping up in Big Ten competition. Saturday's game could answer some questions about their road issues.

This marked the highest-ranked team Rutgers has beaten on the road since winning at No. 13 Pittsburgh on Jan. 26, 2008.

In a second half that featured 10 lead changes, Mulcahy's go-ahead 3-pointer started the 11-0 spurt that helped Rutgers take control. Geo Baker found Mulcahy for the go-ahead basket after stealing the ball from a driving Johnny Davis on the other end of the floor.

“We had some costly mistakes in the second half toward the end of the game,” Davis said. “I felt like that’s what really lost us the game.”

Davis scored 11 points — nearly 10 below his season average — while getting hounded by Rutgers' Caleb McConnell, who matched a career high with six steals. Tyler Wahl led Wisconsin with a career-high 23 points and Steven Crowl added 12.

Baker scored 16 and Clifford Omoryui had 10 for Rutgers, which shot 51% from the floor and went 7 of 12 on 3-point attempts. Rutgers built a nine-point lead in the first half before Wisconsin responded.

“The start of the game specifically defensively we gave them way too much confidence,” Wisconsin coach Greg Gard said. “Any mistake we made, they made us pay for. That’s what good teams do.”

Rutgers: The Scarlet Knights once again showed they can deliver in crunch time. They beat Ohio State by scoring the final 10 points of the game. Their 11-0 spurt proved decisive Saturday.

Wisconsin: The Badgers hurt their cause with some uncharacteristically sloppy play. Wisconsin entered the day making 74.9% of its free-throw attempts but was just 9 of 17 on Saturday. Wisconsin was committing just 8.3 turnovers per game - the lowest average of any Division I team - but had eight in the second half alone Saturday. The Badgers also were 4 of 19 from 3-point range, with Brad Davison going 1 of 9. Davison, the Badgers' second-leading scorer, is 4 of 28 on 3-point attempts over his last four games.

A road win at No. 17 Michigan State and a home loss to Rutgers could cancel themselves out, causing Wisconsin to pretty much stay put in the next Top 25.

Wisconsin: At Indiana on Tuesday.