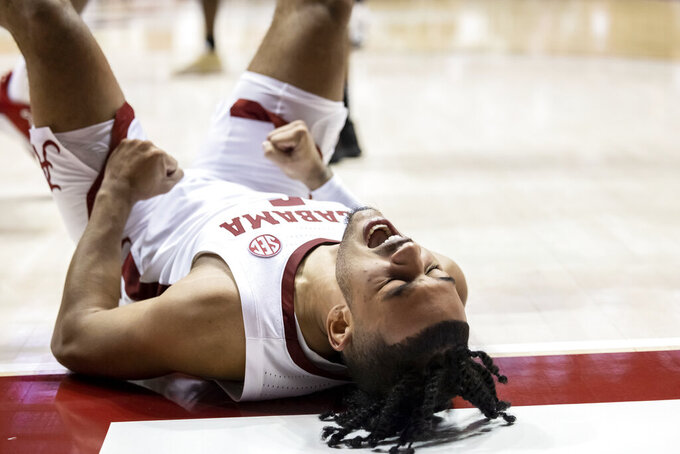 Alabama guard Jaden Shackelford (5) shouts after hitting a basket while falling to the floor and being fouled during the second half of an NCAA college basketball game against Oakland , Friday, Nov. 19, 2021, in Tuscaloosa, Ala. (AP Photo/Vasha Hunt) 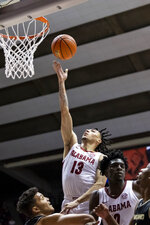 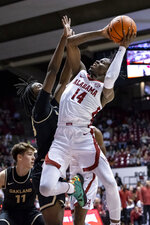 “I think he was really locked in, was playing hard on both ends of the floor,” Alabama coach Nate Oats said. “I tell our guys: Lose yourself in the game, play hard and offensive will come, and that’s what happened for him tonight.”

Jahvon Quinerly had 19 points, three rebounds, two assists and two steals for Alabama. Quinerly and Shackelford combined for 13 of Alabama’s first 21 points in a run that gave the Crimson Tide an eight-point lead in the first 9 minutes of the game.

Jamal Cain led all scorers with 31 points, making 10 of his 23 shots from the field for the Grizzlies (2-2) and nine of his 11 free throws. He also had 10 rebounds and three steals, but little support from his teammates, as Cain made more than half of Oakland’s 19 field goals.

Alabama put the game away with 11 unanswered points near the midway point of the second half, four of them coming from Darius Miles, who ended with seven. Quinerly added a 3-pointer in the stretch.

“You saw (Davison) fighting for rebounds,” Oats said. “When he’s playing hard and flying around, he looks great. He’s attacking the rim, we get out in transition, the better he’s going to look.

“The team’s had 19 blocks in the last two games and Charles has had eight of them.”

Alabama, which needs one more win to match its 5-0 start from the 2017-18 season, beat Oakland despite making just 10 of its 36 3-point attempts (27.8%) and relying on a +16 rebounding margin, 17 offensive rebounds and 12 second-chance points. It helped the Crimson Tide keep up its hot start to the season.

Oats said of the 3-pointers: “We only made 10 of them, but I think the fact that we take as many as we take can spread it out enough that we can get the ball in the paint.”

Alabama: Heads to the ESPN Events Invitational in Orlando, Florida, and plays Iona on Thursday.

Oakland: Travels to the Gulf Coast Showcase in Estero, Florida, and plays Vermont on Monday. ___