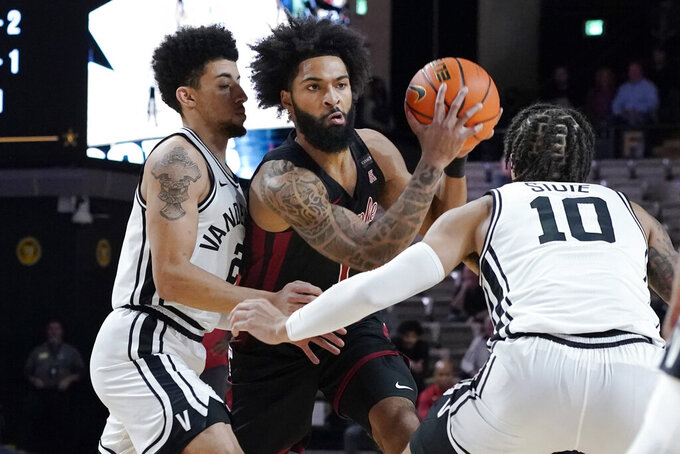 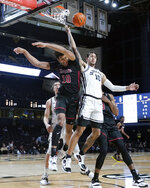 NASHVILLE, Tenn. (AP) — Tai Strickland scored 18 of his 21 points in the second half and overtime, and Temple beat Vanderbilt 72-68 on Tuesday night, becoming the second straight American Athletic Conference foe to beat the Commodores.

Strickland made a steal and hit two free throws at the other end for a 67-65 lead with 1:16 left in overtime. Vanderbilt got an offensive rebound on its next possession and Jamaine Mann made 1 of 2 free throws. Damian Dunn sank a contested 3-pointer with the shot clock winding down to extend Temple's lead to 70-66 at 20.5

After another offensive rebound for Vanderbilt, Mann scored to make it 70-68 with 12.7 left but Jeremiah Williams made two free throws for a four-point lead and Trey Thomas missed a 3-pointer at the buzzer.

Vanderbilt was coming off an 84-72 loss to SMU.

Dunn finished with 18 points for Temple (6-3), which has won five in a row. Temple was playing without its leading scorer Khalif Battle (21.4 ppg), who is out for the season. Strickland missed the previous two games with a thigh injury.

Dunn made two free throws with 13 seconds left in regulation to give Temple a 58-53 lead. Scotty Pippen Jr. missed a 3-pointer at the other end, but Vanderbilt got the offensive rebound and Jamaine Mann was fouled while making a basket to get within three points. Mann intentionally missed the free throw and the ball went out of bounds, last touched by a Temple player. After a timeout with 2,.7 seconds left, Jordan Wright found Pippen in the corner for a contested 3-pointer. Temple inbounded it at 0.5 but a long heave didn’t hit the rim as time expired.

Two teams were playing each other for first time since Temple beat Vanderbilt 67-59 in the 1993 NCAA Tournament Sweet 16 in Seattle. The two schools split a pair of games in the 1949-50 season.

Vanderbilt head coach Jerry Stackhouse and Temple coach Aaron McKie were part of a 1997 trade that sent Stackhouse to the Detroit Pistons and McKie to the Philadelphia 76ers.