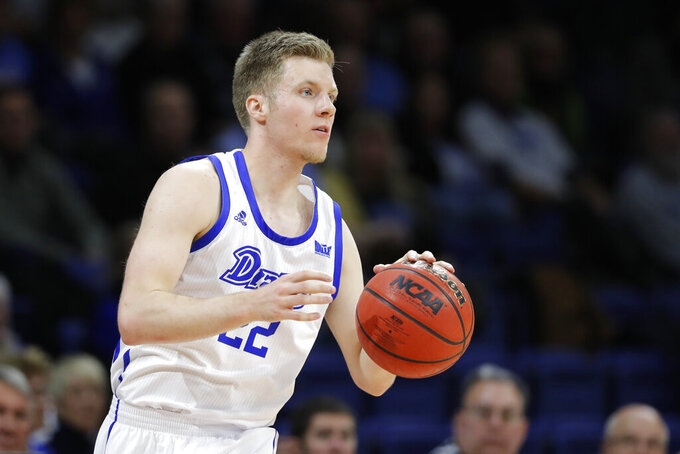 Drake guard Brady Ellingson drives up court during the first half of an NCAA college basketball game against Indiana State, Wednesday, Feb. 27, 2019, in Des Moines, Iowa. Drake has surpassed 20 wins for just the second time in 48 years behind a steady new coach in Darian DeVries, a senior who has blossomed into a player of the year candidate in Nick McGlynn and former Iowa reserve Ellingson, who is hitting three-point shots at a near-record pace. (AP Photo/Charlie Neibergall)

DES MOINES, Iowa (AP) — Drake's season could have been thrown into chaos when point guard Nick Norton went down with a knee injury.

Instead, the Bulldogs have made a somewhat startling run at the Missouri Valley Conference title. Drake (22-8, 11-6 MVC), picked to finish ninth in the 10-team Valley, is just a win away from at least a share of the crown after beating Indiana State 80-68 on Wednesday night.

The rebuilt Bulldogs have surpassed 20 wins for just the second time in 48 years behind a committed coach in Darian DeVries, a senior standout in Nick McGlynn and a star turn from former Iowa reserve Brady Ellingson. Drake, which is tied with Loyola (Chicago) for first, plays at Missouri State (16-14, 10-7) on Saturday.

"I think it's a real credit to these guys in terms of, a bunch of new guys, all in the same place for the first time, and their ability to accept each other and remain unselfish," said DeVries, Drake's fourth coach since late 2016. "They were all just great about it, and they've continued to be good at it."

DeVries, a native Iowan who had spent his entire 20-year career on the staff at Creighton, had tried to land the Drake job more than once. DeVries finally got it last spring when Niko Medved left after just one season for Colorado State.

Faced with glaring holes on his roster, DeVries scoured the junior college and transfer ranks to find guys he hoped would make an impact right away.

Norton turned out to be the best of the bunch. A former All-Conference USA player at UAB, Norton keyed Drake's surprising 11-2 start by averaging 14 points and 5.9 assists with 40 percent shooting on 3-pointers. When Norton suffered a season-ending injury in a double-overtime loss at Evansville, even DeVries acknowledges his team's future looked shaky.

"That part was scary for a few weeks there, because we really kind of centered everything around Nick in the summer and the fall," DeVries said. "We had to reinvent the wheel a little bit of the offensive end."

McGlynn, a forward and the only four-year senior on the roster, has been the foundation that has held Drake together. He has blown past his career highs with 15.3 points and 8.1 rebounds per game, and he has six double-doubles in league games. According to McGlynn, much of the credit for Drake's turnaround can be given to DeVries and his steady, motivational approach.

"He does a great job of keeping us on that track of consistency. It's just a very positive (outlook)," McGlynn said.

Ellingson's ability to replicate and at times surpass Norton's 3-point production helped put the Bulldogs over the top.

While Ellingson had his moments for the Hawkeyes, he couldn't crack the starting lineup in three years and decided to make the 110-mile move west to Des Moines as a graduate transfer.

After hitting just 15 3-pointers a year ago, Ellingson made just 9 of his first 31 attempts from deep this season. But Drake kept playing him — partly because it had to — and things finally clicked after Ellingson scored 25 points in a double-overtime win over San Diego in Hawaii.

Drake lost Norton a week later, but Ellingson had already started on run that hasn't stopped. He leads the Valley in made 3s and is tied for fourth nationally in 3-point field goal percentage at 47.7 percent.

"When guys have that green light, (the rim) looks like a huge ocean," DeVries said.

Drake will still have to win next week's Arch Madness to make it to the NCAA Tournament. That'll be a tough task to accomplish in a league in which seven teams finished .500 or better.

But DeVries has brought stability to the Bulldogs, and that's allowed them to overcome the kind of misfortune that would have sunk previous Drake teams.

"We've been really good with trusting each other, and I think we have really good team chemistry," Ellingson said. "We've bought into the culture of the program."