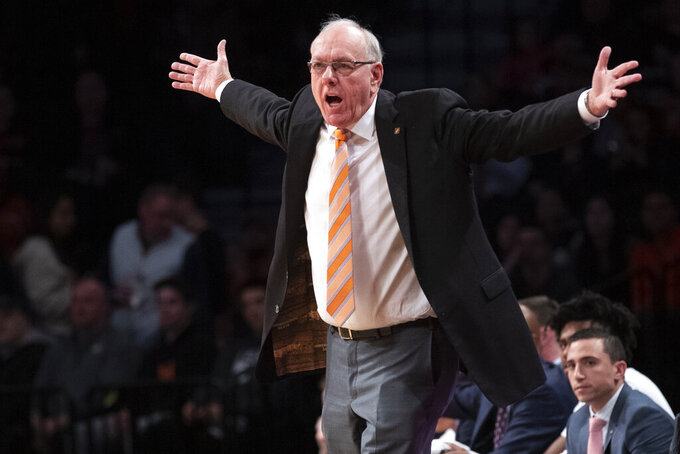 Syracuse head coach Jim Boeheim reacts during the first half of an NCAA college basketball game against Penn State in the consolation round of the NIT Season Tip-Off tournament, Friday, Nov. 29, 2019, in New York. (AP Photo/Mary Altaffer)

UNDATED (AP) — Syracuse coach Jim Boeheim isn't used to this — nine games into the season his Orange are barely above .500.

With no seniors and five freshmen on the roster and apparent weaknesses on the floor, the Orange (5-4) were no match for defending national champion Virginia to open the season — a 48-34 loss, the fewest points for a Syracuse team in Boeheim's long tenure. Syracuse lost to Oklahoma State, Penn State and Iowa in a recent seven-day span, each by double digits.

That gave Boeheim the worst start (4-4) since he took over the program in 1976. The team beat Georgia Tech on Saturday.

“Obviously, our young guys just aren’t ready yet for top-50 teams," Boeheim said. “The four teams that we lost to are just bigger, stronger, and better than we are. It’s not like we’re playing teams that we should beat. The way we’re playing and the way those teams are constructed with upper-class guys, they’re just better than we are right now. It’s obvious to me that we can play a little better.

“It’s tough to lose two or three games in a row anytime, but you just have to keep playing. I think we will improve."

On the season, the Orange's zone defense has been decent despite the use of four freshmen in almost every game. Syracuse ranks 68th in scoring defense (63.3 points per game) and is holding opponents to 28.2% on 3-pointers. Offensively, the Orange are averaging 72.1 points, 16.9 assists and 13.4 turnovers.

A glaring weakness has been on the glass — Syracuse has a rebounding margin of minus-0.7 — and that's limited the preseason goal of scoring more in transition. Starting center Bourama Sidibe, a 6-foot-10 junior who's been hampered by injuries his entire career at Syracuse, is averaging 6.8 rebounds, 245th nationally. That's just ahead of 6-10 forward Marek Dolezaj (5.8), who at 185 pounds can't cope too well inside against players like Penn State's Mike Watkins, a double-double machine at 6-9 and 257 pounds. Watkins had 15 points and 16 rebounds in an 85-64 victory over the Orange in the NIT Season Tipoff in Brooklyn as the Nittany Lions outrebounded Syracuse 57-28.

“We can’t rebound the ball and get up the court,” Boeheim said. “You can’t run without getting some rebounding or getting some turnover situations.”

Boeheim counts on his sharp-shooting son Buddy Boeheim and swingman Elijah Hughes, second last season in scoring (13.7), to help on the perimeter like last year. As a freshman last season, Buddy started slowly, finishing 13 non-conference games 8 of 37 (21.6%) from 3. But once Atlantic Coast Conference play began, he rose to the challenge of the more difficult competition, shooting 33 of 81 (40.7% ) from behind the arc.

Despite that performance and the confidence gained from being tabbed a starter this year, Buddy has started slowly again. In the recent string of losses, he was just 5 of 20 on 3s despite some good looks. Hughes ranks third in the ACC in scoring (19.6) and is shooting 43.8% from long range after a scintillating performance in the 97-63 rout at Georgia Tech — six 3s and a career-high 33 points.

“You have to play with confidence, whether you’re a freshman, sophomore, junior or senior or even a grad student," said freshman Joe Girard III, who has started seven straight games at point guard in place of injured sophomore Jalen Carey. “That’s the name of the game. Mindset is the name of the game in basketball. You can’t go in too high or too low.”

Buddy also excelled against Georgia Tech, hitting six 3s for the second time this season and scoring a career-high 26 points.

Girard, who scored 24 points against Seattle in his debut as the starter, had 12 points and six assists with one turnover, one block and two steals against Bucknell, his best all-around game so far. But Girard, the all-time leading high school scorer in New York state history, has struggled shooting (14 of 45 on 3s). He's an ace at the line, converting 23 of 24 free throws.

Syracuse travels to Georgetown (6-3) on Saturday. The victory over Georgia Tech offers a promising sign, even if the Yellow Jackets were without star point guard Jose Alvarado. It came against a Power Five team; the Orange defense limited the ACC's leading scorer, sophomore guard Michael Devoe (23.8), to 2-of-12 shooting; Syracuse outscored Tech 21-10 on the fast break; and the Orange hit 14 shots from beyond the arc.

“When we have our spacing and get into the lane and get guys open, we’re at our best," Girard said. “When we get up and down, it’s a lot easier on my job to just give these guys the ball."

The game Saturday will be the first home game for the Hoyas since legal matters for three players surfaced after the school announced reserve Josh LeBlanc would transfer. Also leaving, for unspecified reasons, is starting point guard James Akinjo.

Myron Gardner, Galen Alexander and LeBlanc agreed this week — without any admissions — to stay at least 50 feet away from a female Georgetown student, her two roommates and their home and to not contact them. According to court documents, the student accused the three players of “threats against (her) personal safety.”