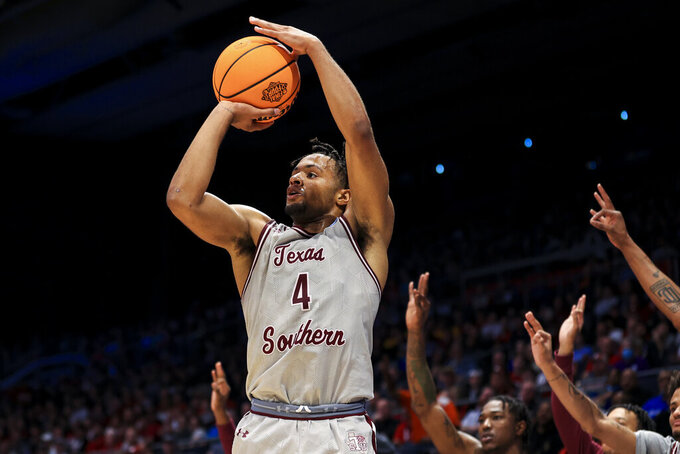 The Tigers earned their third NCAA Tournament win in five seasons and will play top-seeded Kansas in the Midwest first round.

“I feel like anybody can go to any big school,” Etienne said. “We’re men just like them. We put our shoes on like them, pants, shirt. It’s March Madness, so madness can happen.”

PJ Henry hit a go-ahead free throw to highlight a 7-0 run in which Texas Southern (19-12) took the lead and never surrendered. He finished with 14 points and shot 10 of 13 at the free throw line.

“One of the things we talked about was playing extremely hard every second, every play,” Texas Southern coach Johnny Jones said. “It took that against that team to be able to finish down the stretch.”

Texas A&M-Corpus Christi (23-12) led by as many as eight points in the opening period and four in the second half. The Islanders’ season ended after they won the Southland Conference tournament Saturday.

“We weren’t going to be able to finish things at the rim because they’ve got really good shot blockers,” Texas A&M-Corpus Christi coach Steve Lutz said. “At times we did that, but at times we really didn’t make good decisions at the rim.”

Trevian Tennyson led the Islanders with 18 points on 7-of-13 shooting while Simeon Fryer scored 12 and Terrion Murdix added 10.

The Tigers led 32-30 at halftime after trailing for over 10 minutes in the first half. Both teams shot below 40% from the field in the opening period, combining for 15 turnovers and seven steals.

Texas Southern held the advantage on the glass 45-37, including a commanding 25-13 edge in the second half.

The Islanders made just one of their last 11 shots as the Tigers held them to seven points in the final 6:04. Beginning the second half 5 of 7 from 3-point range, Texas A&M-Corpus Christi went 1 of 8 in the final 8:58.

Gresham, who transferred last offseason from Houston, grabbed his most rebounds in 14 games.

“He came in with zero ego and has shown a great deal of leadership with their basketball team and he’s a very impactful player defensively,” Jones said. “He’s one of those guys that gives you what is needed.”

Etienne scored his most points in 17 games and 13 of those came in the second half.

Henry had 12 in the same span. Texas Southern ramped things up and shot 44% in the second half after beginning 40% from the field.

“It wasn’t our night,” Lutz said. “We missed a lot of shots and free throws we normally make.”

Texas Southern: Travels to Fort Worth, Texas, to play No. 1 Kansas on Thursday.