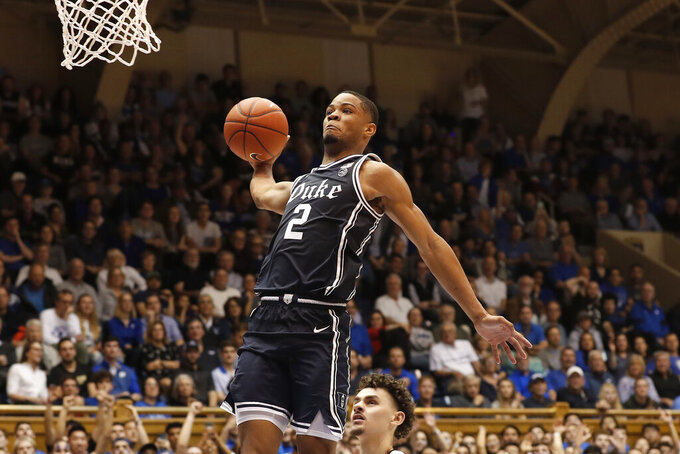 Duke guard Cassius Stanley (2) drives for a dunk against Wake Forest during the second half of an NCAA college basketball game in Durham, N.C., Saturday, Jan. 11, 2020. (AP Photo/Gerry Broome)

DURHAM, N.C. (AP) — Duke started fast and picked up the pace. There would be no need to survive a last-second shot this time.

Brown missed this game with an injury, and Duke scored on eight of its first nine possessions to take control early. The Blue Devils pulled away with a 27-12 run in which they scored on 13 of 15 possessions while making 11 of 12 shots.

“That was one of the most efficient starts we’ve ever had, really,” Stanley said. “Every time we drove and kick, we got great quality shots, and we made them. It’s everything you want out of an offense.”

Joey Baker and Jack White scored 11 points each, and Jordan Goldwire had 10 points for the Blue Devils.

Duke won its 900th game at Cameron Indoor Stadium, more wins than any other college team has at its current venue.

Wake Forest: The Demon Deacons have enough problems at Duke when they’re at full strength. They have lost 21 consecutive road games against the Blue Devils — all since Tim Duncan’s senior season in 1997. Without Brown, who missed his second consecutive game, Wake Forest couldn't keep pace.

“Give Duke credit,” Wake Forest coach Danny Manning said. “They came out with an aggressive mindset and jumped on us early.”

Duke: The Blue Devils are rolling and remain the favorite to win the watered-down ACC. Since their 150-game home winning streak against non-conference opponents ended against Stephen F. Austin on Nov. 26, they have won all 10 of their games by at least nine points.

Duke wore new navy blue “Brotherhood” uniforms with white, Gothic lettering on the front of the jerseys. The uniform is designed to reflect Duke’s history and tradition, in addition to the culture that Krzyzewski has created in 40 seasons.

“We were wearing these special uniforms, so it was kind of like we can’t lose,” Stanley said.

Childress had four assists and four turnovers in 27 minutes, and he continued his recent stretch of feast or famine in terms of scoring. In his last seven games, he has three outings of 20 or more points and four games of eight points or less.

“Tonight was just a rough night for him,” Manning said.

Duke had five double-figure scorers, and none of them included leading scorer Vernon Carey Jr. Carey finished with a season-low eight points on 3-of-6 shooting, playing only 21 minutes because the game was in hand.

Baker finished 4 of 8 after making his first three shots, including two 3-pointers, as part of Duke’s first-half barrage. Before Saturday, he had totaled 13 points in Duke’s previous four games combined since his career-high 22 points against Wofford on Dec. 19.

Wake Forest: Hosts Virginia Tech on Tuesday night, starting a stretch in which it plays three of four at home

Duke: Play at Clemson on Tuesday night. The Tigers won at North Carolina for the first time in program history earlier Saturday.