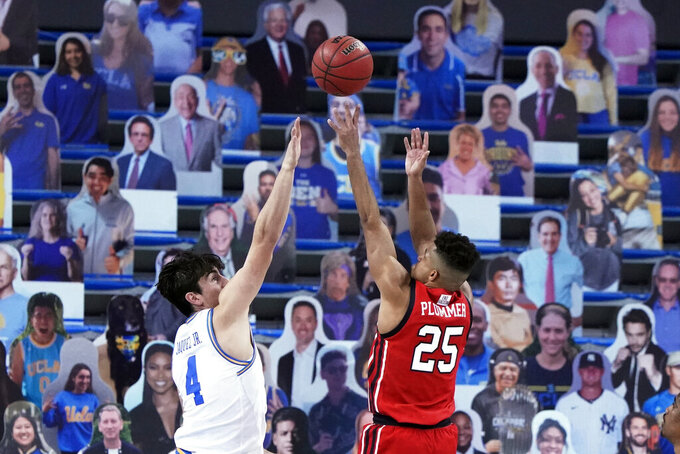 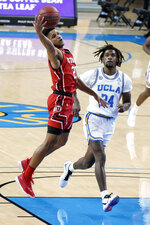 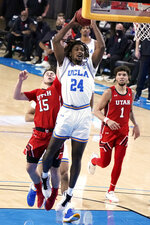 LOS ANGELES (AP) — Late turnovers, defensive breakdowns, and an injury to lone senior Chris Smith. The UCLA Bruins toughed out a lot to pull out a victory to end the year.

Chris Smith scored 16 points despite a bruised knee and four fouls, and the Bruins held off Utah 72-70 on Thursday night for their fifth straight home win.

“Our toughness level is nowhere near where it needs to be for us to reach our potential as a team,” he said.

“We’re happy we got the win, but there are definitely things we got to take away from this game,” Jules Bernard said. “We didn’t play our best.”

Bernard and Johnny Juzang added 13 points each, and Tyger Campbell had nine points and 10 assists for the Bruins. Campbell committed three turnovers late, which is uncharacteristic of him — the redshirt sophomore went into the game averaging 1.7 turnovers in 38 career games and just 1.3 per game this season.

“A couple turnovers I had I probably should have shot those,” Campbell said. “Their defense was really good down the stretch.”

The Utes never got off a final shot after freshman guard Pelle Larsson turned the ball over with 3 seconds to go. It landed in Bernard's hands.

“I was super-relieved,” Juzang said.

Utah coach Larry Krystkowiak wanted his team to drive to the rim for a game-tying basket or take a 3-pointer to win.

“We put a pretty good player in a position to make a play and we’ve got to move on from it,” he said. "We were presented with an opportunity to win the game and didn’t make the play that we needed to.”

The closing seconds were wild, with UCLA clinging to a 68-66 lead. Campbell's bad pass landed in Allen's hands, but Allen lost the ball at the other end and Campbell stole it. Jalen Hill got fouled and made both free throws to keep the Bruins ahead 70-66.

Bernard fouled Plummer on a 3-point attempt with five seconds to go. Plummer made 2 of 3 to leave Utah trailing 71-70. Hill made 1 of 2 free throws for UCLA's final point.

Bernard came up big after the Utes had taken a 60-57 lead. He scored inside, got fouled and made the free throw to tie the game at 60-all.

Plummer missed a 3-pointer and Campbell grabbed the long rebound, starting a play for the Bruins that led to Juzang's one-handed toss before he fell to the court. Juzang got fouled and made the free throw. Bernard hit a jumper that extended the Bruins' lead to 65-62.

Bernard's 3-pointer pushed UCLA's lead to 10 points early in the second half. The Utes closed within three on Plummer's 3-pointer before Jake Kyman answered with a 3 that kept UCLA ahead 55-48.

Allen dribbled around defenders and scored inside to cut Utah's deficit to 57-55. Smith then committed an offensive foul, his fourth of the game, to turn the ball over. Riley Battin's pair of free throws gave Utah its first lead of the second half, 58-57.

The Utes raced to a 16-4 lead, with Plummer doing most of the scoring, including three 3-pointers.

“He looked like World B. Free to start the game,” Cronin said.

The Bruins answered with 14 straight points to take an 18-16 lead. A 3-pointer by Rylan Jones tied the game at 32-all before UCLA scored the final nine points for a 41-32 lead at the break.

Smith tweaked his left knee colliding with a Utes player late in the first half. He limped to the locker room, but returned to start the second half.

Utah: The Utes will spend New Year's Day in Los Angeles before wrapping up their trip across town at USC. They haven't won a Pac-12 road game since beating Washington State on February 23, 2019.

UCLA: The Bruins extended their home winning streak to 11 games overall. They haven't lost at Pauley Pavilion since Stanford won on January 15, 2020. They've won nine straight league games at home, their best such home streak since winning 12 in a row from March 2014-January 2016.

Other than piped-in crowd noise and music, there’s nothing to buoy either teams’ spirits. The Utes’ bench took cheerleading matters into their own hands, standing and clapping while yelling “Defense!” during multiple stretches.