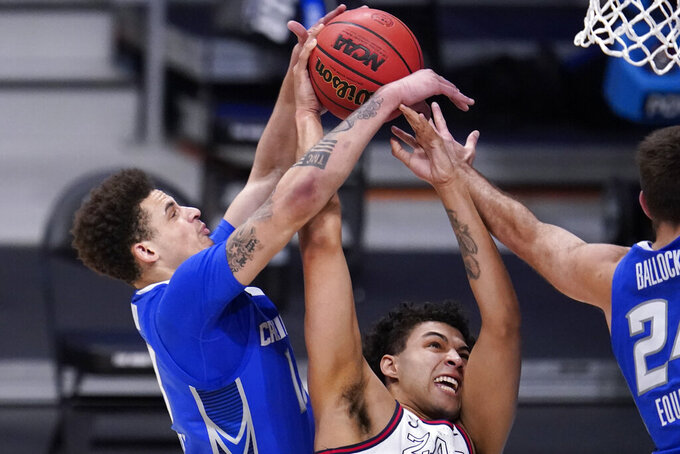 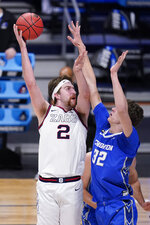 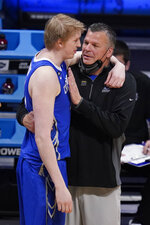 The scary part is, he thinks that also might be true for the undefeated Bulldogs.

Nembhard had 17 points and eight assists, both season highs, to keep the NCAA Tournament's top overall seed rolling Sunday with a 83-65 rout of fifth-seeded Creighton in the West Region semifinals. Afterward, he insisted nobody was satisfied.

“I don’t think we have peaked," he said. “I think, as I said earlier, we can always get better. We can always work on our stuff. So I think we’re getting close, and we need to squeeze out that five percent that we talked about."

It's hard to imagine the Bulldogs (29-0) could play much better.

They extended their school-record winning streak to 33, the Division I record for consecutive double-digit wins to 26 and reached the Elite Eight for the fourth time in six years. Next up is Tuesday's West regional final against sixth-seeded Southern California, an 82-68 winner over seventh-seeded Oregon.

Some of Gonzaga's usual stars were content with supporting roles Sunday.

Second-team All-American Drew Timme led the way with 22 points, six rebounds and four assists as the Zags shot 59.6% from the field against a foe that led the Big East in defensive field goal percentage. Joel Ayayi added 13 points and eight rebounds.

Defensively, the Zags held Creighton to 40 points over the final 30 minutes as they methodically turned a 27-25 game into a blowout. Gonzaga never trailed, led 43-33 at halftime and spent most of the second half pulling away.

The Bluejays (22-9) never really had a serious chance at advancing to the Elite Eight for the first time since 1941, when the NCAA Tournament only gave out eight bids.

“They just play so fast, so efficient with everything they do," said Marcus Zegarowski, who led Creighton with 19 points. “There are no lapses. You just can’t take, not even a play, you can’t take a second off or they’re going to make you pay."

Gonzaga extended its advantage to 20 points on Suggs' layup with 11:22 to go. That just about finished off Creighton as the Zags moved within three wins of becoming the first undefeated national champion since Indiana in 1976.

Creighton: The Bluejays reached their first Sweet 16 since 1974 but didn't have nearly enough against a foe on a clear mission. They were simply overwhelmed by the Zags over the final 30 minutes.

Gonzaga: The Zags have won their first three tournament games by a combined 77 points.

Big East teams haven't found Hinkle Fieldhouse to be any friendlier as a neutral court than it is when they play Butler each season.

Villanova and Creighton both lost here this weekend by double digits, and it might have been disconcerting for the Bluejays to hear the public address announcer saying things like “Bulldogs 3-pointer” when Gonzaga made a shot from beyond the arc.

Syracuse, which played in the Big East during the league's glory days, also lost at Hinkle on Saturday.

On Thursday, Creighton coach Greg McDermott said the Bluejays couldn't rely on defense to beat Gonzaga. They needed to score.

When they didn't, the result was predictable.

“You have to score to play with Gonzaga. We just didn’t score enough," McDermott said. “Obviously, the start of the second half was huge for us. We really felt like for us to have an opportunity, we had to win that first four-minute timeout. Instead they were able to take that lead from 10 to 14 and then it’s an uphill battle against a team like that.”