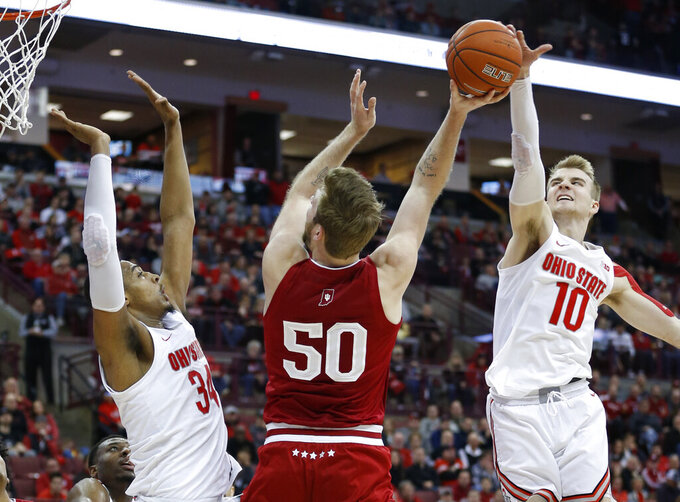 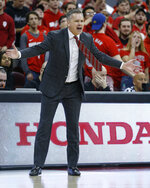 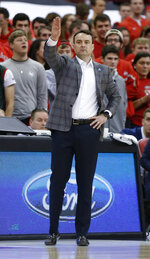 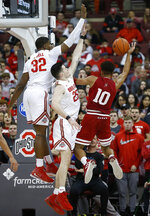 COLUMBUS, Ohio (AP) — With a key player missing from the Ohio State lineup, Kaleb Wesson put the Buckeyes on his back again.

The junior big man scored 15 points and pulled down 11 rebounds, dominating Indiana in the paint in a 68-59 Ohio State win on Saturday.

The Buckeyes (14-7, 4-6 Big Ten), who struggled mightily in January, went on a 3-point tear in the second half in winning their second game in a row and avenged a 66-54 loss to Indiana in Bloomington three weeks ago.

Ohio State was missing freshman guard and third-leading scorer D.J. Carton, who said this week he was stepping away from the team for mental health reasons. Guard CJ Walker stepped up in Carton's absence, scoring 14 and dishing four assists, and Justin Ahrens added 11 on 3-for-5 3-point shooting in the second half.

“They imposed their will physically on the boards, especially early,” Indiana coach Archie Miller said of the Buckeyes, who held the Hoosiers to just four offensive rebounds and zero second-chance points in the game.

Ohio State led at the intermission 31-22, despite firing away from 3-point range and hitting few (3 for 13). The Buckeyes kept firing in the second half, hitting 7 of 14.

Indiana is starting to run into the same kind of struggles Ohio State did when the Big Ten run soured for the Buckeyes last month.

“You know, it's an odd thing,” Miller said. “Teams go through highs and lows and some teams really find their niche. This team, sort of, has hit a pothole so speak. In every season, the story's never written until the end but we're going to have to change paths here and change course of how we're playing."

Indiana: The Hoosiers suffered their first three-game losing streak of the season. They are just 1-5 on the road.

Ohio State: This was a big one for the Buckeyes, who hadn't won two games in a row since mid-December. They shot well in the second half for a change, and built a big enough lead to cruise to a comfortable win. Plus they kept a handle on turnovers, which have been a problem.

“It's life in this league,” Ohio State coach Chris Holtmann said. “We just have to keep getting better.”

Carton, the talented freshman, had shown signs of developing into one of the better players at Ohio State in recent years. That’s up in the air now that he decided to take some personal time away from the team.

The Iowa native said he has mental health issues and felt it was better to take some time off. Holtmann said it's too early to talk about a timetable for his return. He said Carton's teammates had witnessed his struggles and rallied behind him when the player made the announcement Thursday.

“I think it's brave on his part, and it's what needed to happen,” Holtmann said.

Holtmann also made a point to fire at some Twitter users who suggested that Carton's leave was indicative of problems in the program.

“You can take your antiquated thinking somewhere else,” he said. “There is nothing — nothing — more important in our program than our players' physical and mental health and overall growth. Nothing. That will always be the case.”

The Buckeyes will have to make up his 10.4 points and three assists per game, as well as his athleticism in transition. Their offensive game was noticeably slower with Carton Saturday, but they also committed just 10 turnovers.