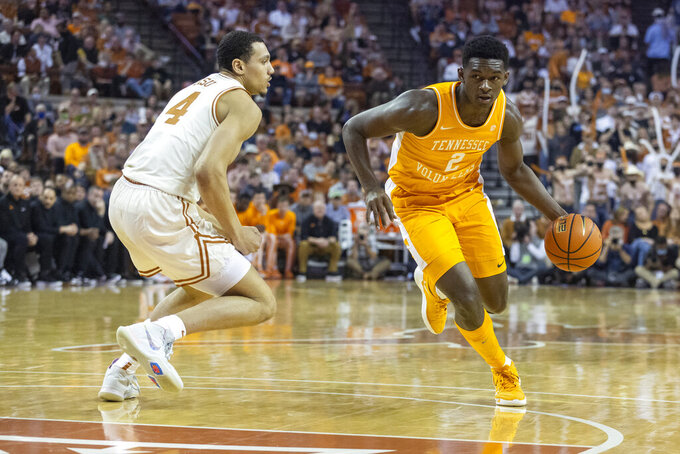 AUSTIN, Texas (AP) — Texas rolled out the welcome mat for Rick Barnes' return to campus, then pulled it out from under him with a free throw at the end.

Timmy Allen's free throw with 6 seconds left sent Texas to a 52-51 win over No. 18 Tennessee in the Big 12/SEC Challenge on Saturday night after the Volunteers rallied from 17 points down in the second half.

The razor-thin victory spoiled the return party for Volunteers coach Barnes, who led the Longhorns program for 17 seasons from 1998-2015, a stint that included a Final Four in 2003 and 402 wins, the most in school history.

And Barnes came oh-so-close to winning his first visit to Austin as a visiting coach, seven years after he was fired from Texas despite all that success.

“I recognize the obvious: Coach Barnes coming back, the emotion in this game. To deny it isn't truthful," said first-year Texas coach Chris Beard. “It was a good night for Texas basketball.”

Allen missed his first attempt, then made his second to give the Longhorns the lead. After calling timeout, Tennessee scrambled to get the ball up court for Josiah-Jordan James 3-point attempt that bounced off the rim before Texas swatted away the rebound.

Allen had missed two late free throws in a loss to Kansas State and shook off the mounting pressure after missing his first attempt with the game in the balance.

“Coach Beard said I was going to win a game at the line later in the season,” Allen said. “I prepared for that moment.”

Tennessee then stormed back and consecutive 3-pointers from James and Zakai Zeigler got them within six. Victor Baileý's flying tip-in off a missed Zeigler 3-pointer tied it at 51-51,

Tennessee had a chance to take the lead but Santiago Miscovi missed a 3-point attempt late in the shot clock. Texas won the rebound before Allen drew the foul for the winning free throw.

“They obviously turned up the heat,” in the rally, Allen said. “Just closing games, that's a problem we've had, stepping on the throat and ending the game. We're going to work on that.”

Zeigler scored 12 points to lead Tennessee (14-6) and sparked the rally that nearly stole the victory for Barnes.

Texas threw a party for Barnes' return with a rare sellout crowd, a video tribute before tipoff and a halftime introduction of a dozen of his former players. The current Longhorns players, who were still in junior high the last time Barnes was in the building, wore warm-up shirts with “Thank You Coach Barnes” and a photo of him cutting down the nets after a big victory.

“Seventeen beautiful years here at this university,” Barnes said. “It was special. I really appreciate it ... I said for years I didn’t want to come back, I didn’t want it to get about me, but it touched me.”

Tennessee: The Volunteers ran into the sort of smothering defense they typically use on opponents and a miserable start to the second half put them in a big hole. Tennessee missed eight of its first nine shots of the half as Texas turned a tight game into a double-digit lead. The Volunteers shot just 36% for the game but rallied in part behind 15 offensive rebounds and 22 points off Texas turnovers.

“Happy with the way we fought to the end,” Barnes said. “We have guys turning down shots for reason I just don’t know. We finally got aggressive and started playing with force.”

Texas: The Longhorns got their best win of the season with their first one over a ranked opponent. Texas shot 54% percent, but started passing up open shots and got too deep into the shot clock after building the big lead. They also started getting sloppy and it was a 10-second half-court violation that set up the tying basket late.

Beard now faces his own personal road trip when the Longhorns return to the Big 12 with a visit to Texas Tech, where he coached for five seasons before leaving for Texas. His stint in Lubbock included an appearance in the NCAA Tournament final and he's sure to get a rowdy greeting from Red Raiders fans. The Texas Tech twitter account showed Red Raiders fans already camping out Saturday night for Tuesday's game.