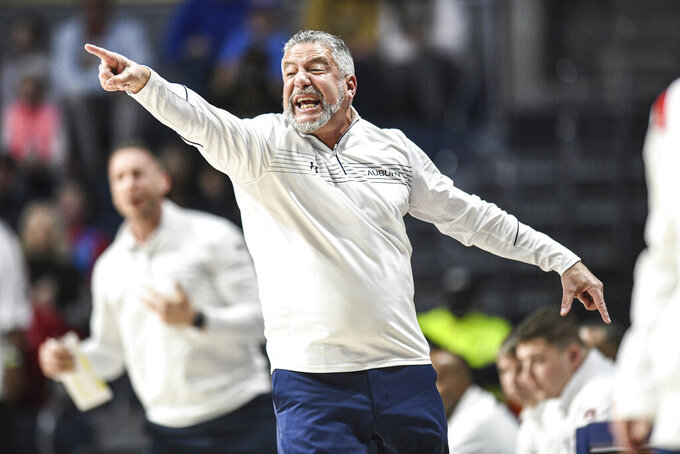 FILE - Auburn head coach Bruce Pearl reacts during the first half of an NCAA college basketball game against Mississippi in Oxford, Miss., Saturday, Jan. 15, 2022. Pearl is the The Associated Press coach of the year in the Southeastern Conference, announced Tuesday, March 8, 2022. (AP Photo/Bruce Newman, File)

GREENVILLE, S.C. (AP) — Auburn coach Bruce Pearl is grateful he can joke about his last NCAA Tournament game three years ago in the Final Four, no matter how gut-wrenching the outcome.

“It doesn't flash in my mind very often,” Pearl said Thursday about Virginia's 63-62, drama-filled victory in the 2019 national semifinals. "Just every morning when I wake up, probably two or three times during the day, and when I go to bed at night.

Pearl called it an honor to take part in such a captivating game three years ago. The Tigers were moments away from the title game, up 62-60 with 1.5 seconds left when Virginia's Kyle Guy was fouled on a missed three-point try. Guy made all three free throws with 0.6 seconds remaining for the Cavaliers' great escape.

Auburn guard Preston Cook, one of two players left who were part of that defeat, said the loss still stings. “But it was a great time for us, for everybody to make to the Final Four,” he said.

The good thing for Pearl is he sees some similarities between that Final Four team and his second-seeded Tigers. He said this year's team defends like that group, but needs to get past the troublesome shooting droughts that have cropped up down the stretch.

The Southeastern Conference regular-season champions have gone .500 in their last six games, shooting less than 40% in losses to Tennessee and Texas A&M.

Auburn's Jabari Smith said Pearl doesn't talk much about the Final Four loss, only how difficult it is to make a deep run in the NCAAs. “He tries to focus on the present and focus on this team and focus on how to get back,” Smith said.

The Tigers don't have much NCAA experience in their lineup. Only North Carolina transfer Walker Kessler has played in the tournament before.

“For all the guys, we all understand there's a finality to a loss,” Kessler said. “We lose, we go home.”

Auburn already had a bumpy start to its NCAA experience. Its charter flight had to return to the airport when a warning light came on. The team took a different plane and made it here without further incident.

Southern Cal coach Andy Enfield grew up in Pennsylvania and knows too well how difficult it is to get East Coast people to pay attention to West Coast teams.

“I understand that no one watches our games,” he said. “They're too late. People are asleep.”

Enfield acknowledged never watching a Trojans basketball game growing up. He doesn't believe it's intentional, just “a lack of awareness at times and a lack of understanding that the West Coast does have really good basketball players.”

The Trojans advanced to the NCAA's round of eight last year before losing to Gonzaga. They're ready to go further and know the attention will follow.

“I feel like when we start winning, people will like begin to respect us,” Trojans forward Isaiah Mobley said.

“We got a nice little message from J.J. Watt this morning giving us encouragement and advice, saying the state of Wisconsin is behind us, the university’s behind us, just go out there and enjoy every moment,” Wisconsin guard Brad Davison said. “Take it all in.”

The Badgers enter the NCAA Tournament on a two-game skid but remain as confident as ever.

“The realistic goal is not to lose another game the rest of this season,” All-America guard Johnny Davis said. “I ain’t going to really sugarcoat it or anything.”

Miami's Charlie Moore is back in the NCAA Tournament after a long journey in college hoops. The Hurricanes are Moore's fourth school in six years. He began at Cal in the 2016-17, then transferred to Kansas where he sat a season before making his tournament debut with the Jayhawks in 2019.

Moore left for DePaul for two seasons before heading to Miami for his final year. He said he never doubted any of his choices.

“I never really tried to worry about anything,” he said. “I just tried to take it one moment at a time. I feel like I did that.”

Iowa State coach T.J Otzelberger hopes to make a triumphant homecoming Friday when his 11th-seeded Cyclones face No. 6 seed LSU in Milwaukee. Otzelberger grew up in Milwaukee and went to college at Wisconsin-Whitewater.

In his first season at Iowa State, Otzelberger engineered an extraordinary turnaround. Iowa State is 20-12 after going 2-22 last season.

“It’s pretty cool,” said Otzelberger, who previously coached South Dakota State and UNLV. “Anytime you’re playing in the NCAA Tournament, it’s a special honor. To be doing that at Iowa State, a place I love, my family loves, and that has treated me so well, so many great friends, means a lot. And then to be coming back home where I played a state championship game a few blocks from here -- I grew up playing on the playgrounds in the city -- it all kind of comes together."