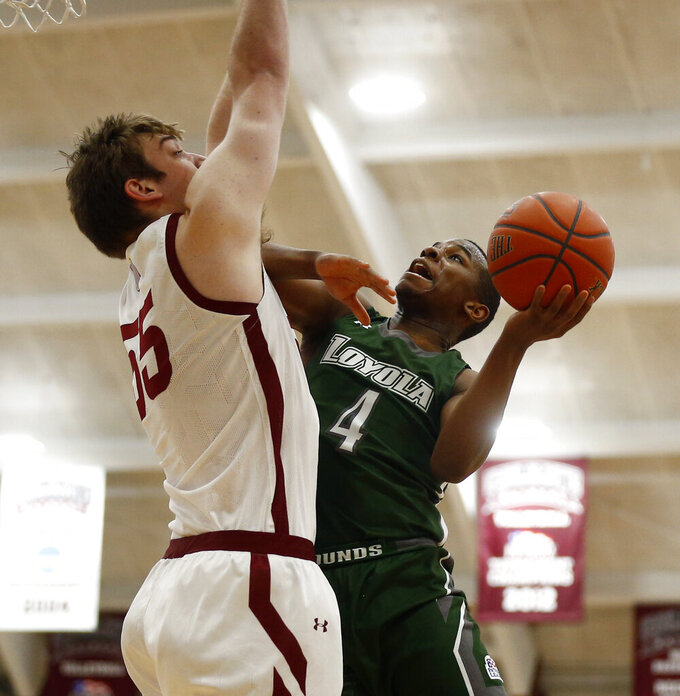 Loyola (Md.) Isaiah Hart (4) goes up for a shot over Colgate's Jeff Woodward (55) during an NCAA college basketball game in the finals of the Patriot League tournament, Sunday, March 14, 2021, in Hamilton, N.Y. (AP Photo/John Munson)

HAMILTON, N.Y. (AP) — Tucker Richardson scored 17 points and Jordan Burns and Jack Ferguson 16 each to lead Colgate to a 85-72 win over Loyola Maryland on Sunday for the Patriot League Tournament championship.

Colgate (14-1) advances to its fourth NCAA Tournament where it's never won. Its last appearance came in 2019.

The top-seeded Raiders, in their fourth straight Patriot League title game, led the entire way in extending their program-record win streak to 13.

"This is as unified a group as I’ve ever been around," Colgate coach Matt Langel said. “I mean, with everything that’s going on in the world they’ve been able to have difficult conversations and grow as a group. And, you know, amidst COVID and all the obstacles that we face, they just keep coming back for more, and they so love one another.”

The Raiders made 14 of 23 3-point attempts for 61%, including 7 of 9 in the second half when they pulled away. Richardson had four 3-pointers and four teammates also hit from behind the arc.

Ryan Moffatt added 11 points and Nelly Cummings 10 for Colgate, which came in averaging over 86.4 points per game, tied with Baylor and second only to top-ranked Gonzaga.

“This is what we’ve been battling to do the whole season,” said Burns, a senior. “It’s been a crazy journey, but we’re so glad we’re the team that came out on top. This year gave us the energy to not take any practice lightly and to just continue to go out there and work hard every single day, and I think that’s why when it came down to the end, we were able to stretch that lead and end on a comfortable note.”

Jaylin Andrews scored 20 points on 9-of-12 shooting for Loyola. Santi Aldama, sixth in the country in scoring at 21.8 points per game, finished with 13 points after scoring 33 in a semifinal win over Army. Isaiah Hart added 11 points. The Greyhounds shot 47% but made only 5 of 22 3-point attempts.

Loyola (6-11) came into the tournament as the ninth seed with a record of 4-10 after not starting play until mid-January and getting off to a 1-7 start. The Greyhounds trailed only 38-33 at halftime, but an 11-2 run put Colgate up by 17 midway through the second half and the lead remained comfortably in double figures.

The two teams didn't meet during the regular season as the league split into three regional mini-conferences because of COVID-19 concerns. Colgate, which began play Jan. 2, faced only three different opponents until reaching the conference tournament.

Now it's on to the NCAAs where the Raiders know they have a monumental task ahead. In its NCAA Tournament history, Colgate has faced two No. 1 seeds and a No. 2.

“These guys will remember this for the rest of their lives, so we’ll have a couple days to get ready for somebody who’s really good,” Langel said. “We’ll have to put a game plan together. I know that our guys will pay attention and now they’ll be super excited. I think we’re really good team, we’ve got a lot of dangerous weapons, and can hurt you in a lot of ways, and so if we can find a way to defend and keep somebody from getting easy shots against us, I think we really like our group and I know they’ll be ready to go.”