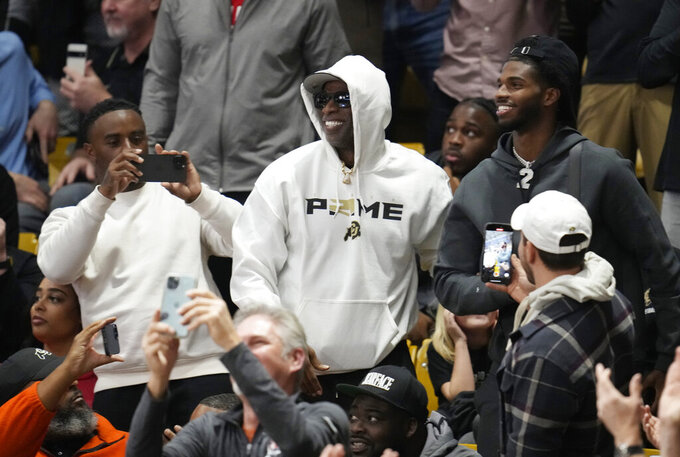 Colorado football coach Deion Sanders, center in hoodie, and his son, Shedeur, right, greet fans during the second half of an NCAA college basketball game between Colorado and Colorado State on Thursday, Dec. 8, 2022, in Boulder, Colo. (AP Photo/David Zalubowski) 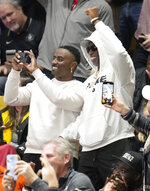 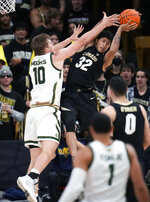 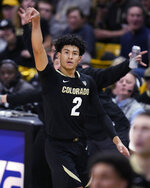 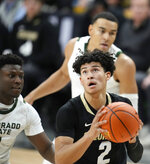 BOULDER, Colo. (AP) — KJ Simpson scored 18 of his 27 points in the second half and Colorado cruised to a 93-65 victory over Colorado State on Thursday night.

Simpson, the Buffaloes' leading scorer averaging 16.2 points, made five 3-pointers, finished 10 of 18 from the field and was three points shy of matching a career best.

Simpson scored five points during a 10-2 run that gave Colorado a 38-30 lead at the break. Simpson then helped open the second with seven points during a 21-10 surge, and the Buffaloes led 59-40 with 13:25 to play. O'Brien's dunk stretched the Buffaloes' lead to 28 points with about six minutes to play.

Deion Sanders, who was named Colorado's head football coach on Saturday, was in attendance during the second half.

Colorado will look for its second straight win when it hosts Northern Colorado on Dec. 18. Colorado State returns home to face Peru State on Sunday.