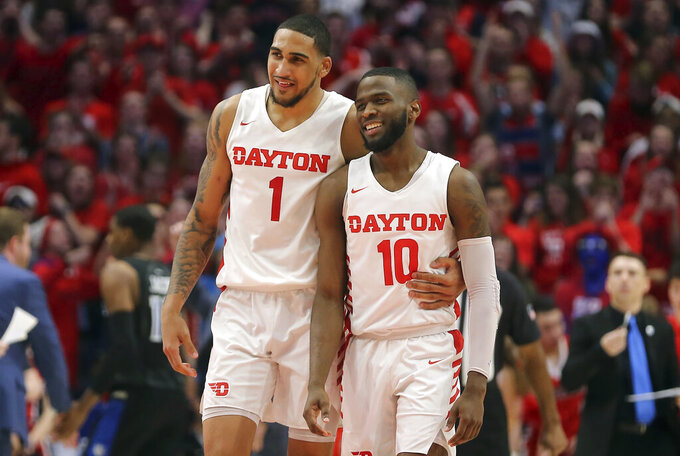 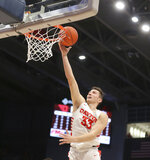 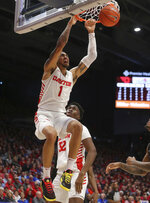 DAYTON, Ohio (AP) — Jalen Crutcher's 3-point shot was off for a second straight game. With driving layups, floaters and free throws, he steadied sixth-ranked Dayton through another close call against Saint Louis.

Obi Toppin scored 17 points and Crutcher led a second-half rally that swept the Flyers to a 71-65 victory over the Billikens on Saturday, keeping Dayton unbeaten atop the Atlantic 10 Conference.

“It was a close one the last game, so we knew they were going to come in here with a head of steam,” Toppin said. “Every game we’re going to get the best of the other team because of the attention we’re getting. It’s not going to be easy at all.”

Crutcher's last-second 3-pointer in overtime rallied the Flyers to a 78-76 victory on Jan. 17 on the Billikens' court. On Saturday, he scored 13 of his 17 points in the second half as Dayton broke open a tight game.

“Toward the end of the game, coach (Anthony) Grant told me to take over the game and lead these guys,” said Crutcher, who was only 4 of 13 from the field and missed four of five shots from beyond the arc.

Jordan Goodwin led Saint Louis with 22 points. Hasahn French had 15 points and eight rebounds before fouling out with 5:12 to go, a major setback for the Billikens.

The officials called 39 fouls in a physical game. Dayton went 20 of 27 from the line, while Saint Louis was 10 of 16. Dayton's Jordy Tshimanga also fouled out.

“Our back was always against the wall because of fouls,” Saint Louis coach Travis Ford said. “It's hard to get into any rhythm whatsoever, and they were calling a lot of fouls both ways.”

Toppin put his high-flying imprint on the game immediately. He hit a 3 for Dayton's first points and within the first 4 minutes had two steals, an assists, a block and an emphatic left-handed dunk.

Toppin had another dunk off a loose ball during a 14-4 run that put Dayton ahead 28-18, the biggest lead of the game. The Billikens missed five shots and were limited to four free throws during the 6-minute spurt.

The Billikens' brawnier front line asserted itself at the start of the second half. French had a three-point play, a layup and a dunk during a 9-2 run that gave Saint Louis its first lead, 47-46.

Crutcher scored off a drive, hit a 3 and made a pair of free throws as Dayton rebuilt a five-point lead, and the Flyers never trailed again. Crutcher's lay-in put Dayton ahead 65-58 with 1:45 left.

Saint Louis is the A-10's leader in rebounds, ranking 17th nationally with 40.3 per game. The Billikens outrebounded the Flyers 45-33 in their overtime game last month and had a 33-27 advantage Saturday, keeping it close.

The Billikens were coming off their most lopsided loss in conference play, 82-68 at home against Duquesne on Wednesday. Ford was pleased with the way his team played, notwithstanding the fouls.

“For us to be even in the position we were, it was a positive sign," Ford said.

Dayton completes a stretch of three straight home games by hosting second-place Rhode Island on Tuesday. It'll be a family affair, with Toppin facing brother Jacob, a freshman forward for the Rams.

“I can't wait for the opportunity to be on the court with my brother,” Toppin said.