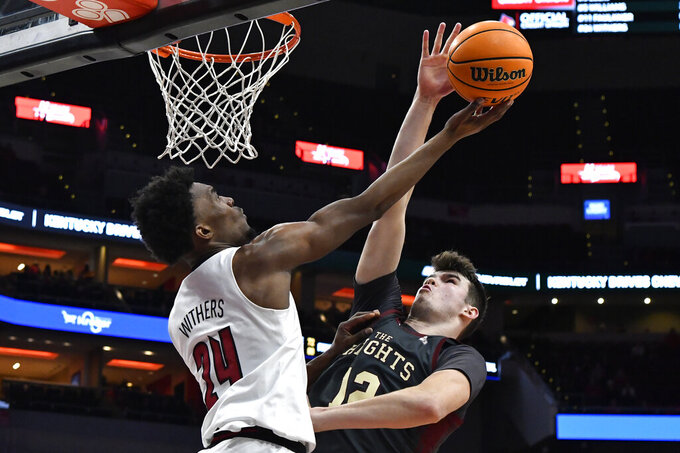 The Atlantic Coast Conference game started 75 minutes late as workers repaired a leak in the north end of Louisville’s KFC Yum! Center arena. Both teams then started cold from the field after the delayed tipoff, combining to make just 7 of their first 23 and 4 and 4 of 12 from the foul line.

Louisville (11-7, 5-3) eventually warmed up to lead 30-28 at the break thanks to Withers, a former starter who came off the bench to make his first three attempts and finish 4 of 6 from the field with eight rebounds.

Curry, who missed Saturday's loss at Pittsburgh with an ankle injury, and Locke took it from there soon after halftime. They made consecutive three-point plays for a 44-37 lead and Louisville finally reached double digits on Withers’ jumper with 4:45 remaining.

Makai Ashton-Langford scored 22 points for the Eagles (7-9, 2-4), who were coming off an historic comeback win at Clemson. BC stayed within single digits much of the game but shot just 29% and couldn’t get closer than eight after the break. The Eagles edged Louisville 43-42 on the boards.

Louisville went on to finish 46% from the field as it bounced back from a 33% showing at at Pitt. Curry made all six attempts from the field and grabbed seven rebounds. Locke was just 3-of-10 shooting, but were 3s and helped the Cardinals beat the Eagles for the second consecutive season.