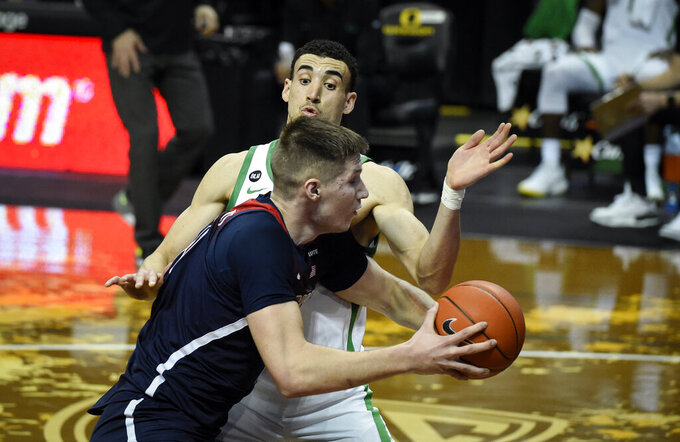 Arizona forward Azuolas Tubelis, front, is guarded by Oregon guard Chris Duarte (5) as he drives to the basket during the first half of an NCAA college basketball game Monday, March 1, 2021, in Eugene, Ore. (AP Photo/Andy Nelson)

The Wildcats self-imposed a one-year postseason ban, including the Pac-12 tournament, following a NCAA investigation.

The Ducks, in the midst of seven games in 13 days to finish the season because of COVID-19 makeups, have won three straight and 8 of 9. They were 8 of 12 from 3-point range in the first half, shot 57% (12 of 21) overall in the second half and finished 18 of 22 from the foul line with just seven turnovers.

James Okinjo scored 19 points and had eight assists for Arizona (17-9, 11-9) and Azuolas Tubelis added 12 points. The Wildcats were outrebounded 37-29, only the second time they were beaten on the boards this season. The first was in a 63-61 loss to Oregon.

The Ducks have another makeup game when UCLA visits on Wednesday before they close the regular season at Oregon State on Saturday.