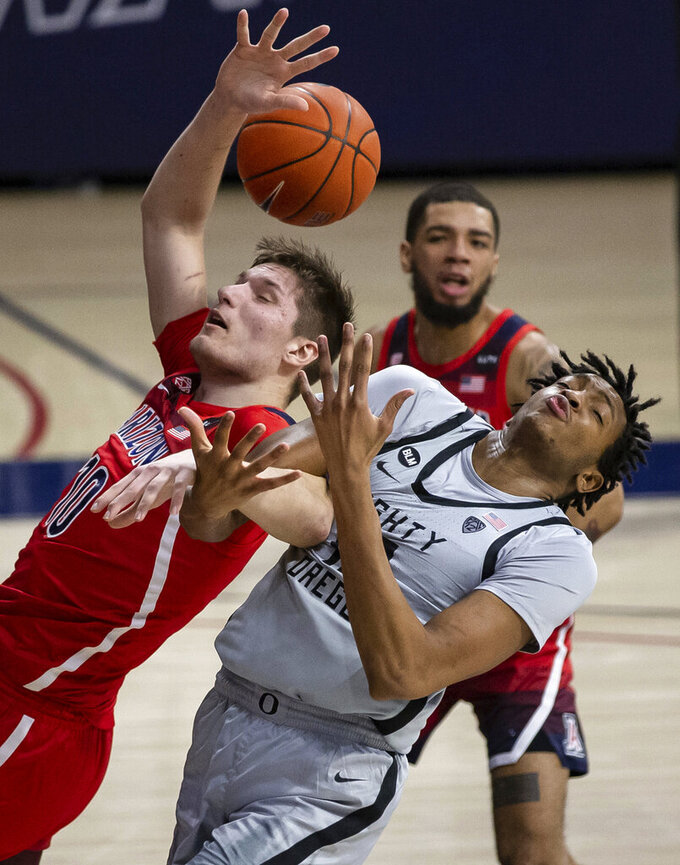 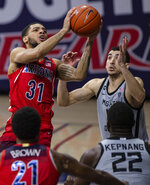 TUCSON, Ariz. (AP) — Oregon's final shot was supposed to be by Will Richardson in the lane. When things broke down, the Ducks worked the ball around to Chris Duarte.

Left open, the senior guard delivered, giving Oregon a six-game winning streak against one of the Pac-12's top teams.

Duarte hit a 3-pointer with 15.6 seconds left, Eugene Omoruyi scored 19 points and the Ducks held on to beat Arizona 63-61 on Saturday.

“The play broke down. We were trying to get Will in the paint to make a play,” Oregon coach Dana Altman. “Will made a good read and Chris made a big shot.”

The Ducks and Wildcats have played some high-level, high-scoring games in recent years.

Their first meeting this season started off as an offensive show in the first half before turning into a defensive struggle in the second.

With Oregon trailing 61-60, Richardson drove along the baseline and kicked the ball out to the wing, where Duarte knocked down a 3-pointer in front of the Ducks' bench. Oregon intentionally fouled with 1.1 seconds left and Arizona got the ball to Kerr Kriisa, who missed a 3-pointer after being harassed by LJ Figueroa.

“It was a contested shot,” Arizona coach Sean Miller said. “The problem with Chris Duarte's shot in front of their bench, it wasn't contested. He was wide open. He makes a contested shot, which he probably would have, that's fine, but you can't be wide open and he was.

The Ducks and Wildcats were supposed to meet in Eugene on Jan. 16, but that was postponed due to Oregon's COVID-19 issues.

Through all the starts and stops this season, Oregon had its top five scorers on the floor together for the first time all season Thursday against Arizona State. They played well together, building a 17-point lead before holding off the Sun Devils 75-64.

The Ducks started strong against Arizona with an early nine-point lead, went into an offensive funk and found their rhythm again before halftime.

The Wildcats started slow, got into a flow and rallied to tie it at 34-all by halftime.

“We were down 11-2 at home because they were more physical, they got second shots,” Miller said.

The teams traded shots to start the second half, then traded clanks as the game grinded to a near halt.

The offensive struggles continued until Duarte squared up and drained the winning 3 after struggling with his shot most of the night.

“We had two options: Will in the lane and me in the corner and that's what happened,” said Duarte, who had 10 points on 4-of-14 shooting. “He didn't have anything, was an unselfish player, kicked it out and I hit a 3.”

Oregon is rounding into form at just the right time. The Ducks could join the AP Top 25 next week after sweeping the Arizona schools and will likely be a contender in the regular-season conference race.

Arizona has yet to find a go-to identity and has lost three of four to put itself on the NCAA Tournament bubble.

Kriisa missed Arizona's first 17 games while dealing with eligibility issues after playing in his native Estonia and a broken nose. The 6-foot-3 freshman guard made his debut against Utah on Feb. 4 and scored 11 points through his first three games.

Kriisa started against Oregon and got into the flow early, hitting three 3-pointers in the first half. He finished with 12 points on 4-of-9 shooting from 3 and had five assists.

“Now it's already better because I know I have a chance to play,” Kriisa said. “Before it was mentally tough. because you practice, you work hard every day, you're just like everyone else and game day comes, you just have to hype everybody up. I really don't look back on it because the time has come for me to play”

Arizona is the Pac-12 leading rebounding team, averaging nearly nine more per game. Oregon turned the rebounding tables on the Wildcats, outrebounding them 38-30 and grabbing 12 offensive boards that led to 16 second-chance points.

“When you have a strength as a team, you have to be able to bring that strength to the biggest games at key moments,” Miller said.

Arizona is at UCLA Thursday.